Open water swimming can be a challenge for many triathletes, especially beginners. A look at some tips and tricks that will make your open water training and racing much easier. 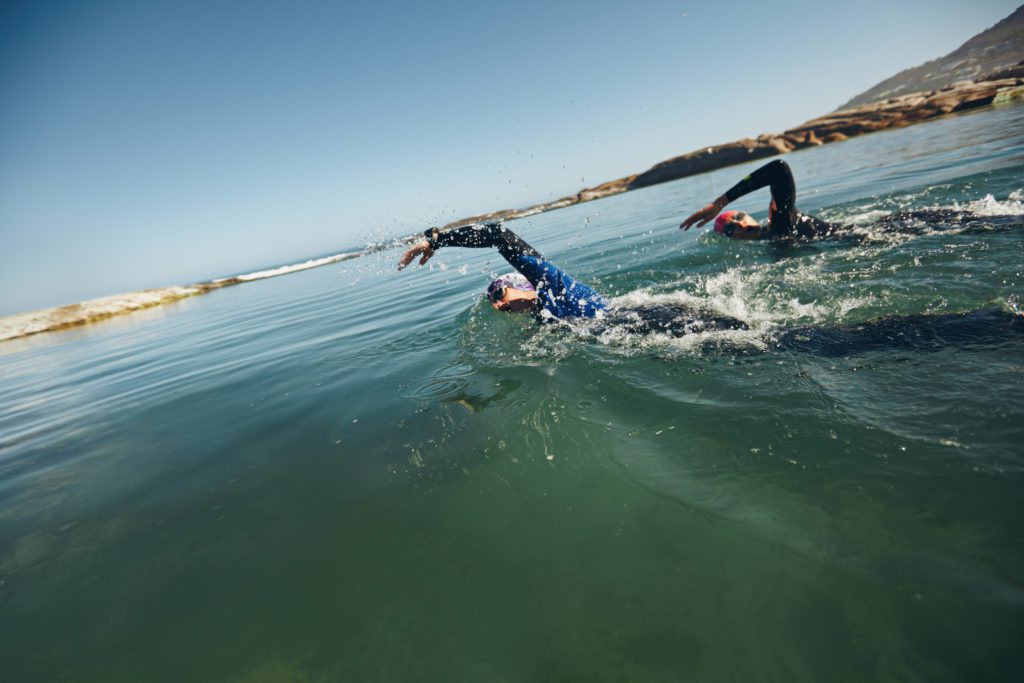 by Theresa Wallace and Rick Hellard

“I am from a very warm country, so I spent the night before the race visualizing the swim. Perhaps I thought about it too much. When the race started, I was able to swim for about five minutes, but felt colder and colder. Then I started shivering and hyperventilating and couldn’t breathe. So I hung onto a kayak and the volunteers comforted me, but when I tried to swim again, I just couldn’t.”

That’s how 39-year-old Dr. Dina Altayeb describes her most serious panic attack. It happened in 2007, during a half Ironman near Cranbrook, B.C. As an Ironman who lives in Saudi Arabia, but trains and competes in Canada, Altayeb is unusual, but her panic attacks certainly aren’t. Many triathletes say they’ve had panic attacks or felt extremely anxious about the swim portion of a triathlon. For Altayeb, cold water triggers her anxiety. For some, especially novices, it’s the fish, weeds, mass starts, the possibility of swimming off-course, or the whole open-water swim experience. For others, it’s a potent mix of performance pressures combined with unpredictable swim conditions.

In a 2004 study of Ironman athletes by Montreal triathlete Karine Grand’Maison, 22 per cent of those surveyed reported being anxious about the swim. They described, in graphic terms, their fears of drowning or of being hit by other swimmers. Anxiety about the swim was the second biggest race-day worry after a more general concern about “not having a good day.”

The symptoms of a panic attack usually include at least four of the following: feelings of shortness of breath, smothering, choking or hyperventilation; tightness or pain in the chest; a pounding or racing heartbeat; feelings of extreme fatigue; a dry mouth; trembling; lightheadedness, dizziness and mental confusion; a feeling of disassociation from one’s body; a feeling of impending doom; and/or, a desire to flee the current situation. Panic attacks are often most intense shortly after they begin, and usually last no more than a few minutes. To complicate matters, a triathlete having a panic attack may not recognize the sensations he or she is feeling are caused by anxiety or fear.

If you think you’ve had a panic attack, you should make an appointment to get thoroughly checked out by your medical practitioner. Panic attack symptoms, triggered by the release of adrenaline as part of the fight-or-flight response, can be similar to symptoms of certain medical conditions – an irregular heartbeat, low blood sugar, a drug reaction, a seizure, exercise-induced asthma or cold urticaria (a rare allergy to cold), for example. Symptoms of swimming induced pulmonary edema (SIPE), associated with maximal exertion in cold water, are also very similar to panic attack symptoms, but SIPE usually involves pink frothy spit-up as a result of plasma crossing the lung capillary membranes into the air sacs of the lungs.

Dr. Stacey Rosenfeld, who heads a team of five psychologists on duty at the New York City Triathlon to help participants with their swim anxieties, says that before the race they use cognitive-behavioral techniques to help competitors develop plans for scenarios they fear. She explains that panic attacks can strike right out of the blue, but understanding they’re caused by anxiety is half the battle. “Learning how to talk yourself down with positive self-statements such as ‘I am just anxious, and that’s understandable’ can help a lot. Seeking contact with others, either to distract yourself or for actual help with your panic, is also helpful. In many cases, simply talking about your anxiety will cause it to diminish.”

Dina Altayeb has done just that as part of her strategy to feel more comfortable in the sometimes glacial-fed water at triathlons in western Canada. She says talking to her coaches and sharing her concerns with other triathletes has helped immeasurably. “Realizing I’m not alone and that even some pros get the same anxious feelings at the beginning of the swim in a triathlon, makes all the difference.” Altayeb now has a routine for entering cold water that starts with standing knee-deep and splashing the water with her hands; the whole immersion process takes about 15 minutes, but works well.

Paul Anderson, technical director for the inaugural Viterra Calgary Ironman 70.3, suggests the most important steps you can take to prevent a panic attack during the swim portion of a tri are to be physically and mentally prepared for that particular race, which includes having a good mental picture of the swim course and your race strategy. Calgary 70.3 race director Cheryl Lowery adds that if you find yourself losing confidence during the swim, remember your mind is a powerful tool. “You are, or hope to be,an Ironman. You can do this. Let your mind relax and your body will follow.”

Heating up your wetsuit:

Based on the premise that the warmer you are when you hit the water the less impact cold water will have, organizers of the inaugural Calgary 70.3 Ironman suggested participants warm up their wetsuits about five minutes before entering Ghost Lake.

The pre-race instructions were:

Take a large disposable bottle of hot water with you on race day. Protect this bottle from getting cold by placing it in the middle of your gear bag. Bring the bottle to the swim start. Make sure the water is not so hot that it will burn you. Pour this water down the neck of your wetsuit. The warm water will reduce the surge of cold water into your wetsuit when you enter the water. Dispose of your water bottle in the trash cans near the swim start.

Tips for training and racing in cold water:

Swimming around buoy markers can be a source of anxiety for some triathletes because contact with other participants is almost inevitable. One of the only ways to guarantee you’re not going to get whacked on the head rounding a buoy is to get there first. For the rest of us, here are some tips:

If you feel like you’re going to have a panic attack:

Send in your hints:

Some triathletes say not knowing where they are in the middle of the swim is their biggest worry and they wish the buoy markers at races had elevated flags on top to make sighting easier and swimming off-course less likely. Do you have any suggestions for race organizers? Or do you have any tips that aren’t included here on how to prevent panic attacks? We’d like to hear from you. Please write to us at kevin@triathlonmagazine.ca.

Theresa Wallace is a freelance writer based in Ottawa. Rick Hellard is a triathlon coach in Ottawa, race co-director of the Mike Collingwood Memorial Triathlon at Meech Lake, Quebec and a former pro.