Organizers of the popular Ironman event in Quebec have announced on social media that this year’s Ironman Mont-Tremblant will not take place.

Yesterday we reported that Ironman Mont-Tremblant would be postponed due to the Quebec government’s mandate that all festivals and cultural and sports events be cancelled until the end of August.

Today we’ve learned that the event won’t be taking place at all in 2020.

Initially there was some confusion about the status of the race because of a difference in the French and English messaging on the site. As we reported, the English version of the story said that the event “will not take place as planned.” According to reports, though, the French version of the announcement used the word “d’annulation,” which translates to “cancellation.” Today Marilou Seguin reported in L’Information du Nord that the race will not take place in 2020, having confirmed that with the race organizers.

Related: Triathlon cancellations and postponements due to Coronavirus COVID-19

That was also confirmed on the event’s Facebook page. 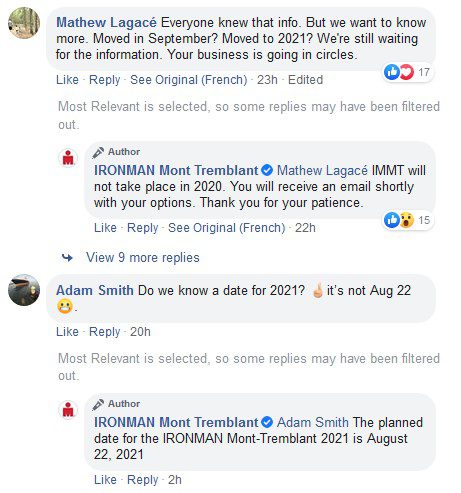 Based on the above information, it looks like the next full-distance race in Mont-Tremblant will take place on August 22, 2021.

Similar messaging on the Ironman 70.3 Mont-Tremblant Facebook page confirms that event is also “cancelled.” (As you can see in the screenshots below, that’s straight from the site – Ironman has been careful about using the term “cancelled” on its site – typically referring to events as “postponed” or “rescheduled.”) 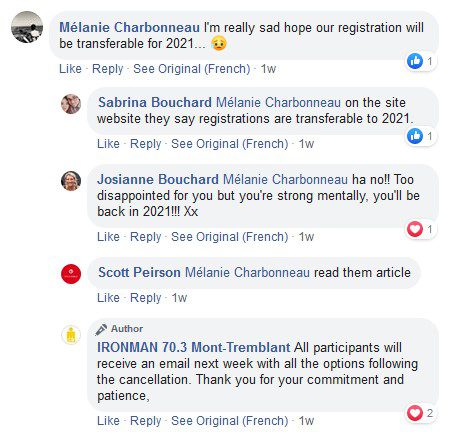 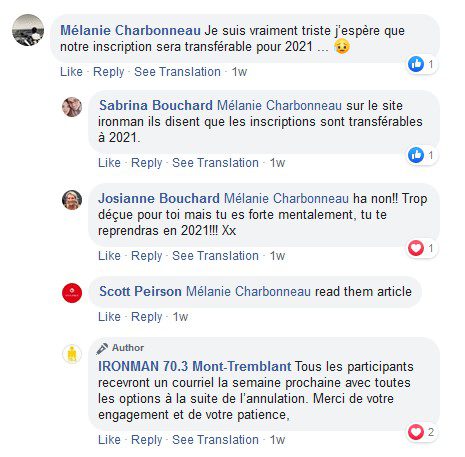