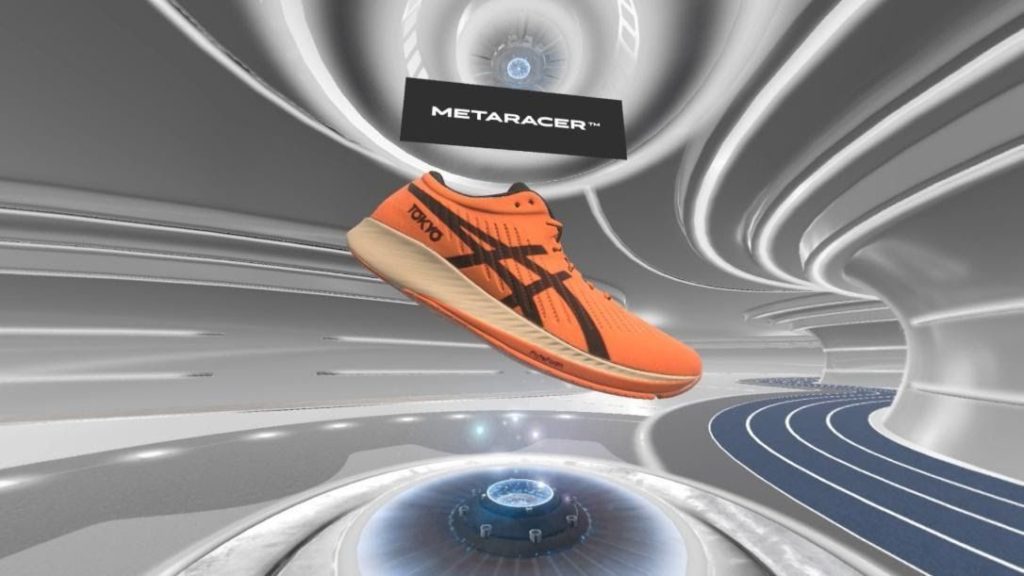 We first got a chance to see Asics’ answer to Nike’s highly successful Vapourfly shoes at last year’s Ironman World Championship when Jan Frodeno introduced a prototype of the new shoe at a press conference before the race. The German would go on to set a new course record in Kona wearing the shoes, running a 2:42:43 marathon on his way to a 7:51:13 finish.

Ironically, Frodeno is no longer going to be wearing Asics shoes, but the speedy race flats are now available for the rest of us mortal beings.

Since Asics couldn’t bring journalists to its planned “Asics Innovation Summit” in Tokyo due to the Coronavirus COVID-19 pandemic, the company delivered Virtual Reality headsets to journalists over the weekend to introduce them to the shoes. Set to launch at the Tokyo 2020 games, the shoes come in a flashy Sunrise Red to symbolize both Japan and the city of Tokyo, and will retail here in Canada for $260.

Canadian Running Magazine’s Madeleine Kelly has had a chance to run in the shoe and provided this review:

The Asics Metaracer is the company’s newest, and fastest, road-racing shoe. Lower in profile compared to other road-racing shoes on the market, the carbon-plated, Sunrise Red shoe is one of the lightest in the business. At 190 g for a men’s size 9, this shoe strikes an impressive balance between light and springy. This is exactly what a runner wants on a marathon start line, and for as long as possible during the race.

That’s the main goal of this Asics shoe: its designed to help marathoners feel fresh so they have more to give at the back end of the race – this shoe is designed with kilometre 30 in mind. 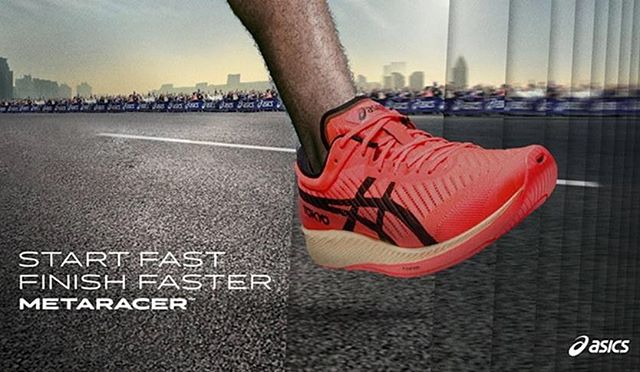 The secret sauce of the Metaracer is the three-part cushioning system in the midsole. First, there’s the Guidesole technology, which is designed to promote efficiency. Guidesole gives the shoe a noticeable rocker, which improves a runner’s toe off, which in turn reduces the load on the calf muscle by up to 20 per cent. Less wear and tear on the body means less wasted energy, which makes for better times over the course of a marathon. The rocker pushes you forward, but doesn’t feel like it controls your movement. The rolling motion takes pressure off the big toe, which by extension, takes pressure off the entire chain of muscles.

Part two of the cushioning system is the Flytefoam midsole. This is the company’s lightest version of the Flytefoam, a foam they use across multiple shoes. The foam is extremely responsive, to complement the Guidesole technology that it sits under. This is the protective layer of cushioning.

Part three is the carbon plate. Like many other carbon-plated shoes, ASICS uses a plate that runs through the entire shoe to give Flytefoam the structure it needs to perform.

With racing shoes, especially carbon-plated racing shoes, one of the chief complaints from runners has been poor grip when the roads get wet. This is largely due to the weight that’s saved from using a minimal outsole. Usually a heavier outsole means a more durable one, so when racing shoes are concerned about conserving weight, the outsole is a place they can save.

Asics took this problem and created an extremely thin outsole so thin at the back of the shoe that it can barely be seen from the profile view. This thin outsole packs a big punch by both maintaining durability, while also using the brand’s wet grip rubber–a sole that becomes tackier as the ground gets wet. When put to the test on a wet run, I didn’t feel my feet slipping at all, which is very good news. I was impressed with this outsole.

Many racing shoes have transitioned to a knit upper, which has its benefits if the shoe fits you perfectly–it’s comfortable and highly breathable. However, if a shoe is a little wide for your foot, it’s hard to make a shoe with a knit upper  fit just right. Asics went with an engineered mesh rather than a knit upper, a choice I like. They also decided on a traditional lacing system. Another point for Asics, in my books.

The upper is very light, promoting breathability, but isn’t as pliable as a knit upper would’ve been. For some runners this could be a drawback, but for the narrow-footed among us, this is a major win. There’s only one colourway, Sunrise Red, which symbolizes the city of Tokyo and the nation of Japan. The shoe was set to be used at the upcoming Olympic Games that have since been delayed one year.

If you’re a runner who’s hoping to line up for a fall marathon, consider doing so in the Metaracer. It’s a very bouncy shoe that really does feel like it’s saving your legs from the forces of running. This shoe will especially interest those looking for a carbon-plated marathon shoe, but who also want a relatively minimal stack height. This is for the kind of runner who likes to feel closer to the ground.