As one of four captains of the International team for the Collins Cup, Lisa Bentley is confident her team can compete for the win at the upcoming race in Samorin, Slovakia in May.

The wins never came easy for 11-time Ironman and 16-time 70.3 champion Lisa Bentley – when you suffer from Cystic Fibrosis, you’re not supposed to be able to even complete such long races, let alone win them.

Related: The Road to the Collins Cup

“If we, as captains, can motivate them to be all in, we’ll be competitive,” Bentley says, when asked how the International squad can take on the European juggernaut. “The athletes need to feel a sense of team, and a willingness to go all out, to make this one of the most important races of the year. The head-to-head element will drive the competitive juices. Everyone seems to be talking about Team Europe, but let’s remember that Paula Findlay smoked Lucy Charles-Barclay at Challenge Daytona last year in what was essentially a head-to-head match-up, and Sarah Crowley and Teresa Adam will be more than a match for the likes of Ryf and Haug. Of course, no one needs to be reminded that anyone who is matched up against Sanders better be prepared for the fight of their lives, because Lionel has a simple binary approach to this race, ‘Win or die.’ As Captains, it is basically just unleashing a caged lion – or perhaps you might say a caged Lionel!”

Bentley feels that the race-day matching will be a critical component to team performance and that the captains’ picks will also be decisive.

The International team will be made up of six men and six women. The first four men and women will be automatically selected based on the PTO World Rankings. Bentley and her fellow team captains, Simon Whitfield, Erin Baker and Craig Alexander, will nominate the final two members of the team.

“I believe it’s part of my job to stay up to date,” she says, and has encouraged potential team members to “keep the captains on the teams informed on what they’re doing” in terms of training and racing. 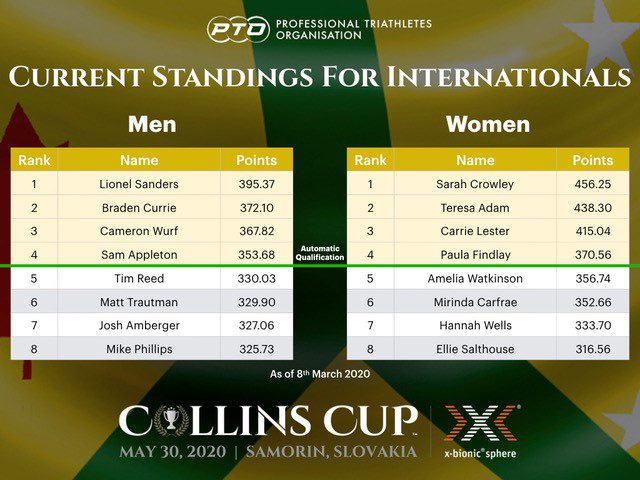