The 2018 IRONMAN World Championship is now two months away. Last year, Lionel Sanders came just two minutes and 27 seconds short of being crowned world champion. This year he will be one of the main contenders with names like Jan Frodeno, Sebastian Kienle and Patrick Lange. But before Kona, Sanders will be using IRONMAN Mont-Tremblant this weekend as part of his preparation for the big race on October 13th.

While he and his wife drove up to Quebec from Windsor, ON, Sanders took the time to share his thoughts before Mont-Tremblant.

TMC: Why is IRONMAN Mont-Tremblant part of your prep for Kona this year?

LS: The timing this year works well for Kona. Last year the ITU Long Course World Championships worked perfectly. It was around the same timing, and two third’s the distance of an Ironman. But this year the race was earlier, and it just didn’t make sense for me this year.

Mont-Tremblant comes at the perfect time. I have made a few changes in practice with diet, equipment and positioning, so with a race like this, I can put those changes to the test before Kona.

Also, I love the community and area. We are heading out earlier just to enjoy the area. I have done the 70.3 race on multiple occasions and know the course so well.

TMC: I’ve watched your recent YouTube videos and have noticed a lot of golf. Why?

LS: I grew up playing a fair bit of golf. We had a little par three near our place as a kid, so I actually do enjoy the sport. But recently I started adding some rounds of golf as some active recovery and found the similarities to swim staggering.

Golf is all about efficiency, rhythm, your mindset and approach. The same can be said and is true for me with swimming. You cannot go based on exertion in swimming, that isn’t an efficient way of swimming. So, I find by doing some golf I practice that mindset I need for swimming.

TMC: What is your mindset going into this weekends race?

LS: I am coming into this race following four blocks of Ironman training, so the plan is to execute something that will be required of me at Kona. If I want to swim, bike or run a certain number in Kona, I better be able to test those waters in a more inviting climate here in Mont-Tremblant.

I am a bit short on endurance at the moment. I will continue to build for Kona following this race, but I will be looking to hit certain numbers. In the swim it’s all about efficiency, the easiest swims I’ve done are often the fastest. Really in a triathlon efficiency is king in every discipline. On the bike, I am looking at numbers around 300-310 watts for the 180K. Finishing off with the run I am looking to run through the half at 1:22:30 and even splits. For the Ironman it is all about being steady and closing. So, for both the bike and run that will be the goal.

Also, I’ll be testing the changes made with my diet and equipment. Practice shows positive improvements, but it’s important to put these changes to the test in a race before Kona. 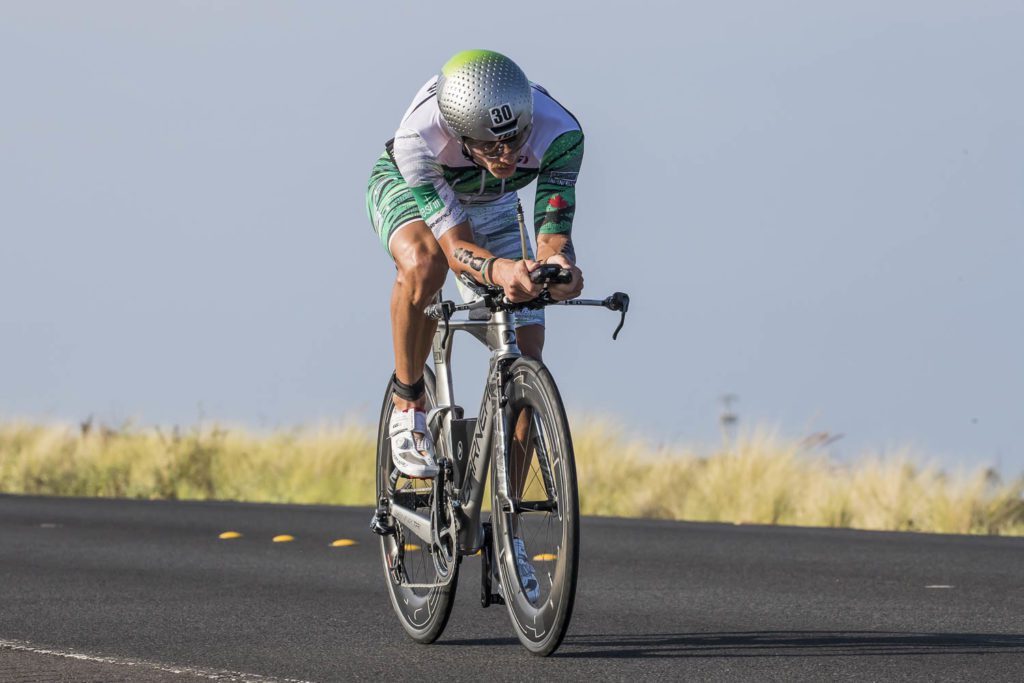 TMC: How much has that second place at Kona last year impacted your training?

LS: It has been my foundation. I mean, I was 2:27 short, so obviously I was doing something right. But it has led to changes that I believe will help me.

TMC: What are your thoughts on the competition this race?

LS: It’s a good field with some solid racers. Joe Gambles is a fighter, Cody Beals is making his IRONMAN debut, Jeff Symonds has a great run off the bike, and Andrew Yoders is an elite swimmer and cyclist. I’ve learned in this sport not to underestimate anyone.

For me I want to focus on executing my strategy, even splits and hitting the objectives I know I need to hit before Kona.