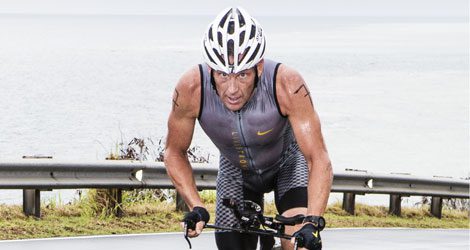 Yesterday, USA Today reported that Lance Armstrong’s ban from competitive Olympic sports has been “partially lifted”, which means he’ll be able to compete in some events other than cycling.

Could this mean Armstrong, who up until 2012 competed as a pro in non-drafting racing, will return to triathlon?

Maybe, but he also isn’t sure he wants to.

“I am now 45 years old and just exercise these days for general fitness and for my sanity,” he told USA Today. “My days of competing are past me.”

It still seems like Armstrong has some interest in competing in endurance sports again, as he’s been seen participating in ultra-marathons such as the prestigious Western States 100 earlier this year and recently said he’d like to race Kona as well.

As far as his partially-lifted ban goes, it looks like certain triathlons could be option for him.

“He can compete in a sanctioned event at a national or regional level in a sport other than cycling that does not qualify him… to compete in a national championship or international event,” said United States Anti-Doping Agency spokesman Ryan Madden.

This would exclude Ironman or ITU racing but would allow Armstrong to compete in independent races like Escape from Alcatraz, Wildflower Triathlon, or New York City Triathlon.

Armstrong denied doping for almost a decade before admitting to using banned substances for each of his seven Tour de France victories. He was stripped of those titles and he still fighting a federal case against him that could cost him millions.