Jen Annett had pulled out all the stops for this year’s Ironman World Championship. She travelled to Kona two weeks ahead of the race to acclimatize. Her goal was a top-10 finish – after taking third at the Ironman European Championship in Frankfurt in June and second at Ironman Canada in July, that was a more than reasonable goal.

That dream was shattered, though, just a few kilometres into the bike at last Saturday’s race.

“We were coming down Palani,” she said in a phone interview earlier today. “They were on my left. The guy suddenly slowed down and turned right in front of me. I did not have time to react at all.”

Annett crashed into the motorcycle, destroying her front wheel.

“In the heat of the moment my head was exploding with all kinds of thoughts,” she said. “You are not quitting. You did not come here to quit.”

She got a new front wheel (you can see the “Ventum” logo on the replacement wheel in the photo below), got back on her bike and returned to the race. 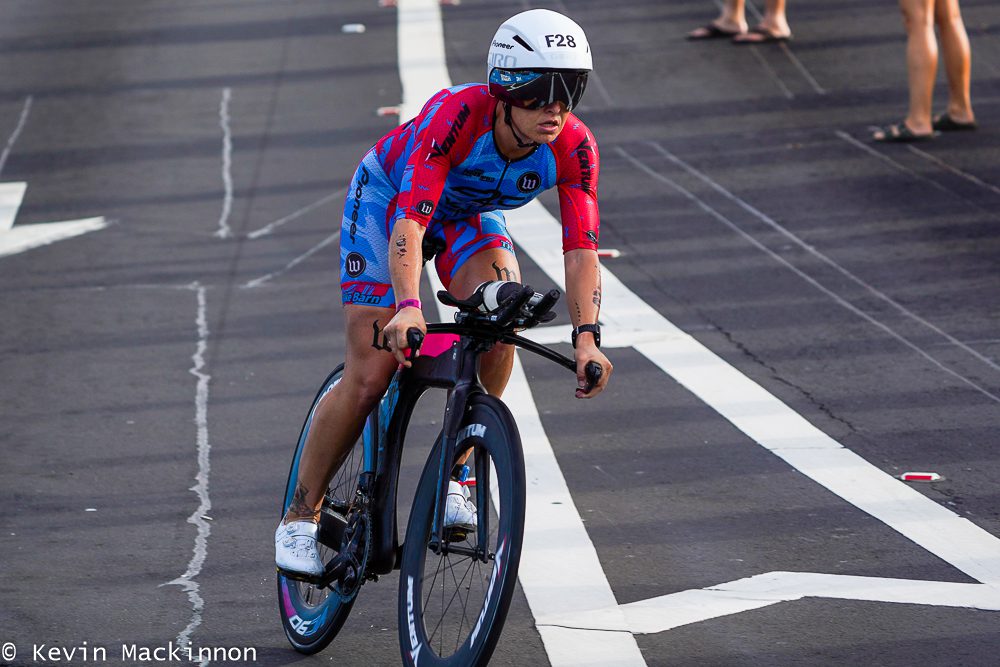 It wasn’t until she was further into the bike course that she started to realize just how badly she had gone down, and how badly she was hurt. Once she got on the Queen K highway, more than 10 km later, she realized her handlebars were crooked. That was the least of her issues.

“Initially I thought my wrist was broken,” she said. “I watched it swell in front of me.”

Annett pushed hard until the turnaround in Hawi, but by then the “pain really started to set in,” she said. “Every bump I hit it felt like someone was stabbing me through my ribs and out.”

“We have all kinds of interesting battles with ourselves during races, but this one topped them all,” she continued. “I got through the first couple of kilometres [of the run] jogging. I saw my coach and my friends and family – and said I don’t think I can do this.”

Annett has never recorded a DNF, and didn’t want the Ironman World Championship to be her first. She soldiered along the run course for a while, walking with some other pros who were struggling, then realized that she had to stop.

“You’ve crossed the line from stubborn to stupid,” she told herself.

Looking back, she not only knows she had no choice, she also can’t believe she made it as far as she did.

“In all honesty, from all the pain I’ve had from this, I have no idea how I did what I did,” she said. “I’ve got a bruise the side of a volleyball on my hip and side.”

While a CAT scan done after the race came back clear, she continues to deal with issues from the crash – in addition to the swelling in her hip, she has “some sort of soft tissue stuff in (her) ribs.”

Annett is still in Kona, doing her best to enjoy a family holiday before returning to Penticton next week. We’ll do our best to provide updates on her recovery, but for now we’ll let her try to recover.