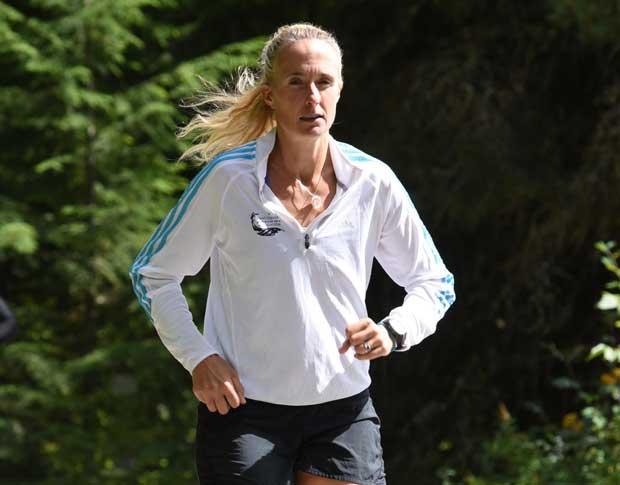 Julie Miller, who was disqualified from Ironman Canada in 2015, has competed in, and in some occasions won, multiple ultramarathons in British Columbia while banned from triathlon. The Squamish, B.C. resident gained notoriety in 2015 when officials determined that it was “impossible for her to complete the course as quickly as she claimed” referring to her then-Ironman Canada victory.

The New York Times published a piece, dated April 8, 2016, entitled “Swim. Bike. Cheat?” in which the publication investigated Miller’s race at Ironman Canada in 2015. The lengthy piece details how Miller erased a 10-minute deficit off the bike to cross the line in first at the Whistler, B.C. competition. At the time of the race, Miller completed the Ironman in 10:49:03. She was initially disqualified because she did not finish with an electronic timing chip (though she was photographed wearing the Velcro strap that holds the chip in place); she was reinstated shortly after. After receiving multiple tips from athletes, some citing past “dubious” circumstances, the regional director for Ironman, Keats McGonigal, disqualified Miller from Ironman Canada 2015 that August.

A second piece in The New York Times includes video with the author, Sarah Lyall, writing “it appears that Miller skipped the first lap of the marathon course.”

A group of athletes, as reported by The New York Times, concluded that Miller was “triathlon’s version” of Rosie Ruiz, who famously crossed the 1980 Boston Marathon finish line in first but was disqualified for cutting the course. Miller, who was quoted as saying “I did not cheat in the Whistler Ironman competition nor would I ever cheat or have I ever cheated in any competition,” denied the allegations.

“I took some hard learned lessons from the Ironman experience,” Miller says looking back on the events and commenting on her recent racing appearance, “and have since started racing with a GPS watch and this past year purposefully raced the entirety of each race with a friend or family member. I have chosen to do so, for several reasons, one of which to be transparent.”

Months after July 26, 2015, the date of that year’s Ironman Canada, Triathlon Canada banned Miller for two years from Nov. 1, 2015, as determined by the organization’s disciplinary committee. The restriction prohibits Miller from competing in “any race sanctioned by Triathlon Canada, and its members” as well as any competitions outside of the country if it means representing Team Canada. She breached Triathlon Canada’s Code of Conduct but no further details, as it pertains to Ironman Canada, were provided. Ironman, too, banned her for “repeated rule violations.”

What can a governing body do?

Ultramarathons, of course, do not fall under the same governing body as triathlon.

“Miller’s participation did come to our attention at the time last year (post-race),” says Maurice Wilson, technical manager of road running and cross-country with BC Athletics. “After reviewing the terms of the ban imposed by the ITU [International Triathlon Union], Triathlon Canada and TriBC, and speaking with TriBC, we concluded that her ban only applies to events falling under the sport of triathlon’s jurisdiction. As such we have no grounds to direct BC Athletics sanctioned events to deny her entry.”

Wilson says that BC Athletics also consulted with the Canadian Centre for Ethics in Sport (CCES) and confirmed that “there is currently no mechanism within the CCES that addresses athlete misconduct of the type perpetrated by Miller across sports.” He adds that such a mechanism only exists for doping offences.

On Aug. 12, 2016, Miller ran the 40-mile (64K) category of Fat Dog 120 in Manning Park, B.C. She ran 10:08:51, good enough for first place among women and second place overall. According to Miller, she ran the 40-miler with Jen Schorz, supported by the two being in the same mid-race photos. The mother of two finished 52 seconds ahead of Schorz at the end of the point-to-point race.

“As an individual who loves sport, I have continued to participate in organized events from time to time over the past year,” Miller told Canadian Running. “My ban from Triathlon Canada does not restrict me from participating in other events, and so I chose to continue to compete within the clear restrictions I had been given. I have always been open about my participation, I haven’t hidden my participation in these races, I have had open discussion with some of the race directors and never altered my name or been sneaky about my registration.”

“I didn’t realize she was banned from triathlons and found out after the race,” Fat Dog 120 race director Heather Macdonald says. She adds that “we are considering whether we will allow known cheaters to race; definitely not if they have cheated in a trail race.”

Later last summer, Miller again competed in a trail race, the Golden Ultra in Golden, B.C., on Sept. 23-25, 2016. There, she finished mid-pack running with her sister Lisa Stiver, who was “keen to do her first ultra,” Miller told Canadian Running on Tuesday. Results show the two finished together.

“I was made aware of Miller’s attendance by another runner and thought long and hard about what to do,” a spokesperson for the Golden Ultra said referring to Miller’s participation in 2016. “In the wide realm of dishonest racing tactics, I’m most concerned about performance-enhancing drugs and course cutting. Performance-enhancing drugs have long-term effects that extend well past the intake cycles. Course cutting, while annoying, is a pretty in-the-moment benefit. I would hesitate to tell a runner they can’t participate because they course-cut somewhere else, but I would monitor them and be very cautious.”

Rene Unser, the race director for the Broken Goat 50 in Rossland, B.C., did not comment on the record but did note that the race is upholding Triathlon Canada’s ban and refusing Miller’s entry to the 2017 race, information which she has relayed to Miller.

“I hope to be allowed to continue participating in other races, to maintain my conditioning, share opportunities to race with friends and family and take advantage of new challenges,” Miller remarks. “I have taken steps over the last three years to address what I can, and hope racers and directors alike allow me to move forward in my life.”