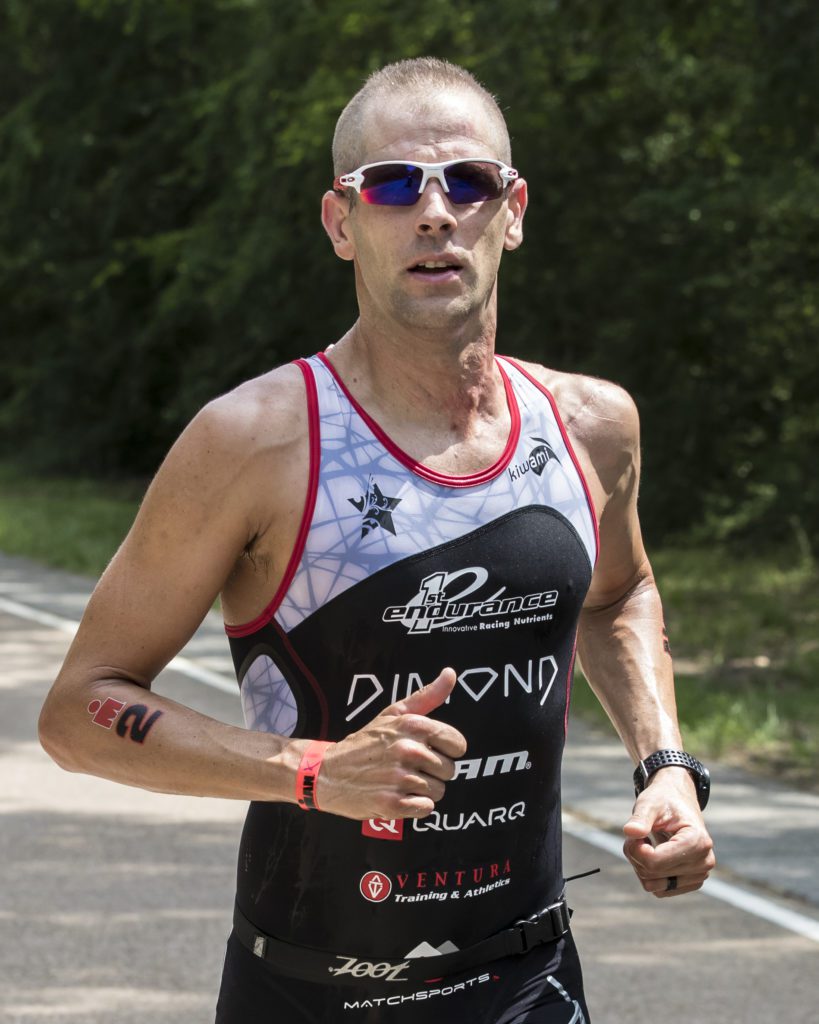 It’s minutes before the start of Ironman Mont-Tremblant. Defending champion Jordan Rapp is on the beach, looking focused as he prepares to enter the water. As he stretches you can’t help but notice the large scar on his neck. It’s a reminder that he’s lucky to be alive, something that he thinks about more these days now that he has three kids and is nearing the end of his professional triathlon career.

That pro career almost came to an abrupt end on March 23, 2010. Jordan Rapp, fresh off a two-Ironman-win season (Ironman Canada and Ironman Arizona) was down on his aero bars, flying along a road near his home in Thousand Oaks, Calif. with the wind behind his back. He doesn’t remember when he got hit by the car. He has no recollection of naval officer Tom Sanchez rushing to his side as blood poured from his neck. He doesn’t remember Sanchez reaching into his neck and finding something pulsing there and pushing down on it.

“You’re going to be OK,” Sanchez kept saying, not really believing it himself. Rapp only came around two days later because of the pain he felt when they were taking his breathing tube out. For 18 days he was in the hospital. A workout became just pushing his IV pole. Sometimes thinking about getting back to racing was inspiring. Other times it felt like a “crushing weight” because he couldn’t imagine riding a bicycle again – he couldn’t put himself or his wife through another ordeal like the one he was facing. The doctors told him not to run in case he fell and hurt his collarbone. He couldn’t swim, so he tried to just go to the pool and kick. His arm was so injured he could only hold the kick board with one hand.

It was five days after the doctors told him he could ride his bike outside before he actually took the plunge and went for a spin on the road. It wasn’t until August that he was able to run for a half hour. He went for his first hour-long run in September.

For years after he got that scar he didn’t think about the fact that it was a miracle he was still here. The motivation was to get back to racing. He was back at Ironman Arizona in November and finished fourth.

“It’s less about being just happy to be here versus the cliché ‘if you were given a second chance, what would you do with it?’” he said at the time. “Would you be happy you were given a second chance, or would you try and capitalize on it? I remember my coach saying: ‘After accidents like yours, people are either better or worse. No one is the same. I guess we’ll find out what happens to you.’” 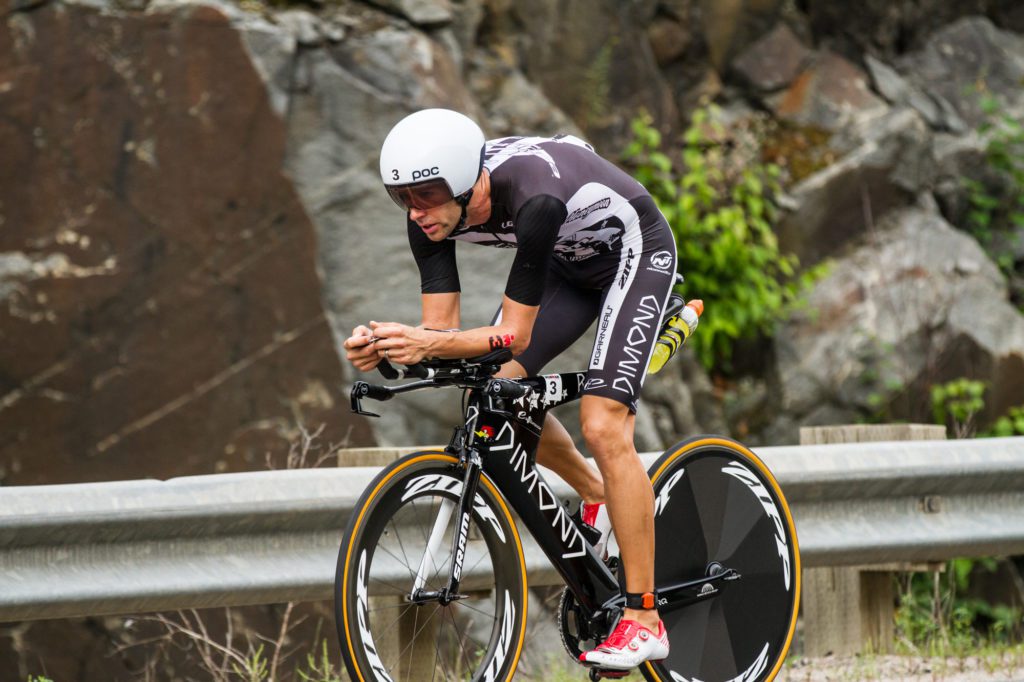 Rapp answered that question in style. He became a much more balanced triathlete than ever before. The Princeton grad with a degree in aerospace engineering had started his endurance sports career in rowing, which led itself to a prowess on the bike.

When he won the ITU Long Course World Championship in 2011 Rapp quietly showed the world that he had become a fearsome runner, too. He outran the rest of the competition in that race by three minutes and was the only man to go under 1:50 for 30 km. That’s 2:36 marathon pace – plenty fast enough to run with the best in the sport.

In May, 2012 Rapp continued to prove that he had come back from his injury as a better athlete, running down Mathias Hecht and breaking 2:50 on a tough, hot course in the Woodlands at Ironman Texas. Later that year he would take the title on another blistering hot day at the one and only Ironman New York, leading off the bike but really separating himself from the field on the run.

The ever-analytical Rapp finally decided he was ready to take on the world’s best in Kona. Since then he’s struggled to find the race he feels he’s truly capable of on the Big Island.

“That first year I went, in 2012, I just felt like I ran out of steam,” he remembers. “I had done a lot of racing – I did Texas, New York City and then I did Leadman three weeks before Kona.”

In his first Kona appearance he finished a respectable 13th. A year later he didn’t fare as well, posting a DNF. It wasn’t until the end of 2014 that he seemed to finally be getting things back on track after that disappointing Kona race, which left him out of the Kona picture that year. His win in Mont-Tremblant last year put him back in the Kona picture and, seemingly, in contention for a top finish before a broken saddle wrecked his day.

“I raced in 2013 and knew I wasn’t ready and it wasn’t a good day. Last year (2015) I had a good swim, was going right where I needed to be on the bike, I was riding well… Who breaks a saddle during a race? Even if I just look at the fact that despite riding 50 miles on a broken saddle and 50 miles on a saddle that was off … my power numbers were where I should have been. Then on the run it was like coming off a new bike.”

Which brings us back to that beach on the beautiful lake in Mont-Tremblant. He hadn’t intended to be back to defend the title – not because he doesn’t love the race in Quebec, but rather because he’d hoped to have his Kona slot locked up before then. The broken saddle left him with a 21st-place finish – enough to “beat all the age groupers and Daniela Ryf,” Rapp jokes – hardly a position that earned him a lot of Kona Pro Rankings points. He returned to Arizona again, only to find himself embroiled in an incredibly competitive event. The first half of 2016 turned out to be a challenge, too.

“Arizona has become the fall edition of world championships,” he says. “The top five were separated by five minutes. It’s such a competitive race now. I had a race there that would have been a course record most years and I was fifth. Texas was hard, not knowing if they would have a bike course. Then the bike course they came up with, well, it ended up being a swim/run race. I got sick – had I not, I probably would have been OK and got enough points [to qualify for Kona] that I wouldn’t have had to do another Ironman, but I either ate something, caught something or shook the wrong hand.”

That race in Texas, though, signalled a change in Rapp’s outlook on racing. Rather than stop, he was determined to finish the race. Second off the bike, he was forced to walk to the finish, getting there in 21st spot. The challenges continued:

“I was able to bounce back and went to race in Australia… and there was a downpour on the bike course. It was a tree-lined road and I’ve never seen so many people pulled over on the side of the road [with flats]. The only thing that was not so bad about getting a flat was that Luke McKenzie, who finished just ahead of me, had two flats.”

Rapp was seventh in Cairns, which meant that he needed more points to punch his ticket to Kona. Which put him on that beach in Mont-Tremblant. He would eventually finish second.

“I thought, as hard as I rode, no one would have the legs to run me down, but apparently that’s not the case,” Rapp laughed after the race. “What an amazing run by Chris [Leiferman].”

In his Ironman debut Leiferman put together a 2:45 marathon, which was too much for Rapp, but the runner-up finish was enough to get him the points he needed for a return to Kona.

It will be his 21st Ironman. It might also be one of the last times we see him racing as a pro. Rapp and his wife, Canadian 2004 Olympian Jill Savege, have three children and, at 36, Rapp can envision a future outside racing. One would think that the future is bright. Princeton aerospace engineering grads coming off a pro career would, one assumes, be a valuable asset in the all-too-competitive cycling industry. Rapp’s popular persona in the tri-world will certainly help, too. He’s the chief technology officer with Slowtwitch.com, which gives him lots of “cred” with the triathlon community, while his charity fundraising efforts over the years have emboldened his reputation as not only a great athlete, but a great guy, too.

But there’s still that competitive fire.

“On the right day, a good day for me in Kona, I can be in the top five,” he says. Unfortunately last year, Rapp would struggle to 37th.

Hopefully we’ll get to see him compete there again.