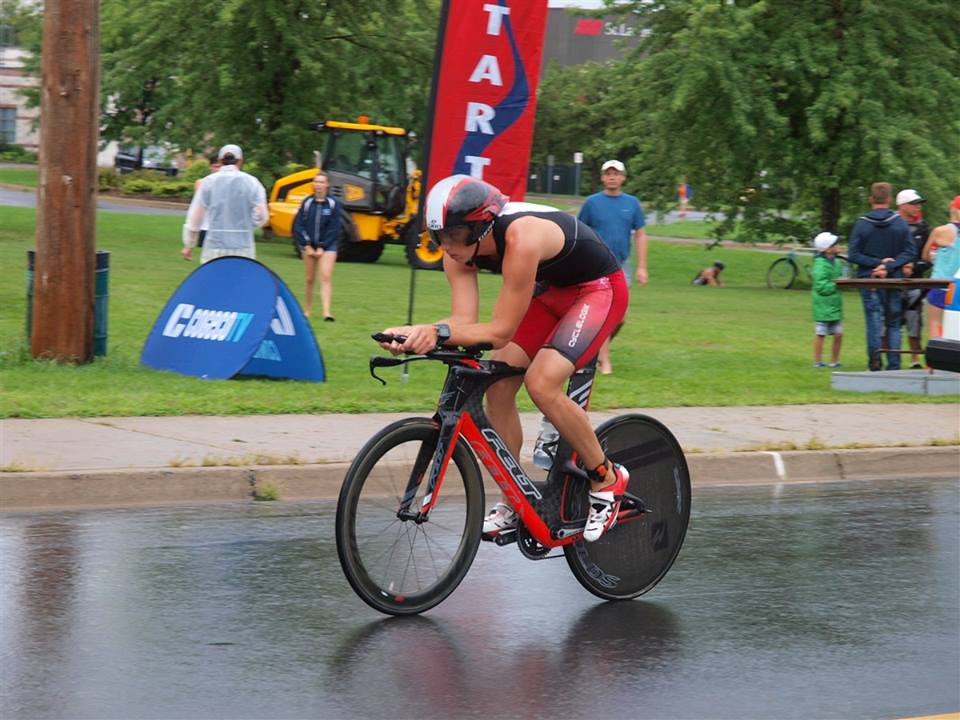 One of six Canadian pro men on the start list for this weekend’s Ironman Mont-Tremblant, Ottawa’s Jordan Monnink will tackle his first long distance race on Sunday and try to build on the consistent results he’s been delivering so far this year.

The 29-year-old placed sixth at Ironman 70.3 Mont-Tremblant in June, behind a stacked podium of other Ontario talent. Prior to that, he also finished sixth at Ironman 70.3 Eagleman and second overall at the Ottawa Race Weekend Half-Marathon. Balancing work as a server and personal trainer with pro racing, Monnink aims to reach the highest levels of pro competition and hopes to one day make it his full-time career. Building on his early season success, he heads into the pro race at Ironman Mont-Tremblant confident in his training and with knowledge of the course, but without any expectations.

“I’ve raced the 70.3 in Tremblant six times previously, so I feel this is a great course to make my Ironman debut on,” he says. “Aside from being petrified of the distance of the full Ironman, I take some solace and comfort in the fact that I know the course really well and that it’s really close to home. The decision to enter this race was a last minute one and at this point I am just going to respect the race and the distance and just see how things play out on race day.”

Monnink likes to focus on the details like strategy and mindset in his training, and says this is what has helped him step up to the next level in his races.

“I’ve shifted my focus from whose there to being there for myself and doing what I’m capable of. You can’t focus on what others are doing.”

While this has helped his performances in the half distance this year, it will no doubt play a role in the Ironman, too, which requires so much time spent along with your thoughts.

At this point in his career, Monnink feels his strengths in triathlon are fairly even across all three disciplines.

“I have room to improve in all areas of the sport,” he says.

One clear strength he does have, is time management — which is necessary when trying to fit in training around two jobs with varied hours.

“I can make a schedule and follow it to a tee,” he explains. “With training, I get it done whichever way I can. I do a lot of solo training right now.”

Monnink takes advantage of Ottawa’s vast trail system for his runs and prefers to stick to the bike trainer for most of his rides. In the winters, he trains with the Carlton University masters swim team.

The third year pro won’t be the only first-timer in the men’s pro field on Sunday. On the Canadian side, Alex VanderLinden and Antoine Jolicoeur Desroches are just two other names making their Ironman debut in Tremblant this weekend, too. With many of the top names in the sport getting ready for Kona or just coming off an Ironman race, the field has some strong contenders but few clear favourites. With a solid day, Monnink could crack the top 10 or even top five.

For now, he’s not so focused on specific results but rather with building up his experience in the sport and working towards improving his results even more in long course racing and the half distance, specifically.

“If I can qualify for 70.3 worlds as a pro, I’ll consider this whole endeavour a success.,” he says.