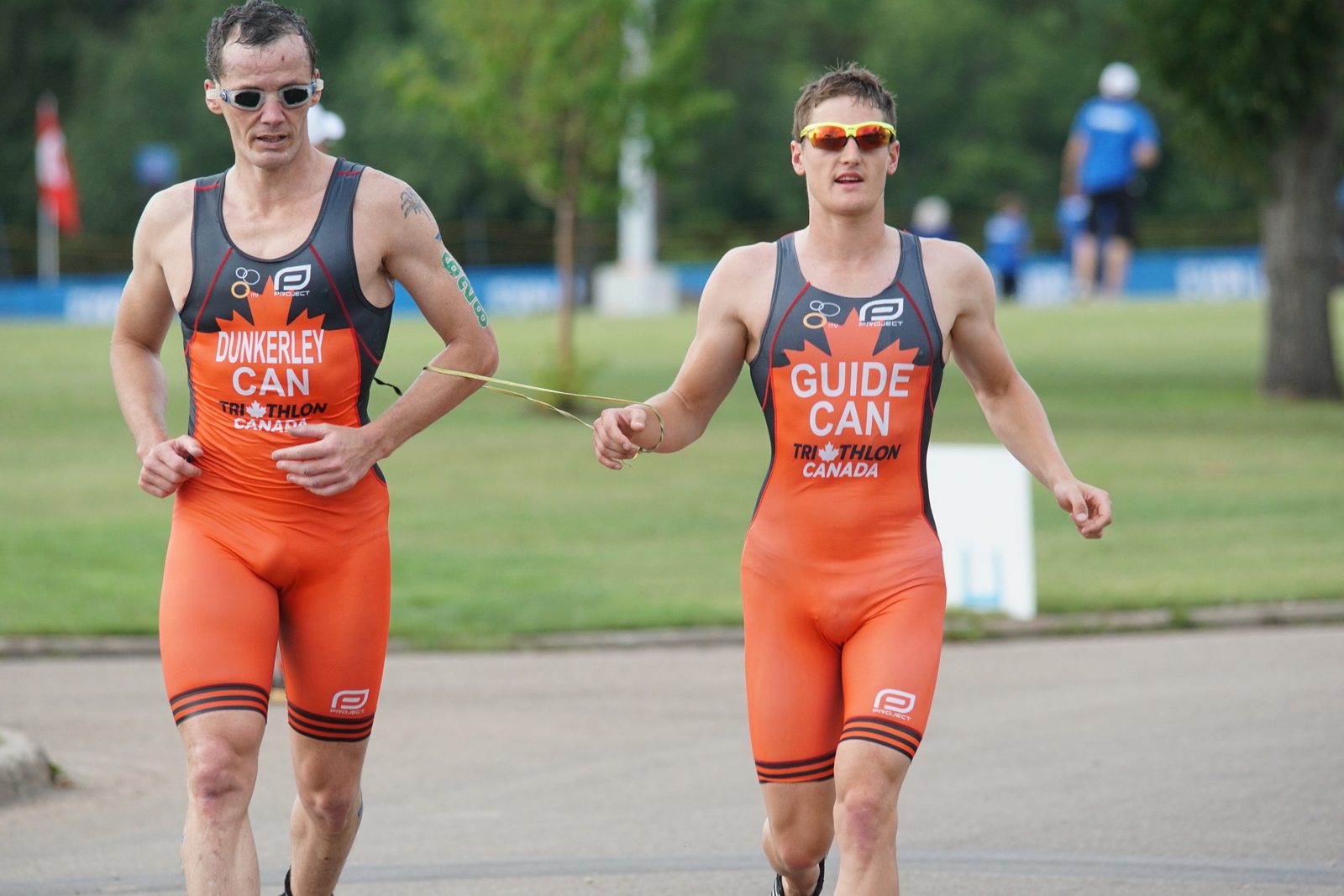 Jon Dunkerley and his guide, James Cook, are looking to form a successful partnership as they aim for the Paralympic Games in Tokyo in 2020.

Dunkerley, 37, of Ottawa, Ont., is a former paralympic sprinter. He was born blind due to a genetic defect, and excelled in a variety of sports during his school years. Dunkerley represented Canada Para-Athletics at the Paralympics in Beijing and London in 2008 and 2012, respectively. He competed in races between 100m and 400m, and is the current Canadian record holder over 200m in the T11 category.

In 2015, Dunkerley retired from competitive athletics. He kept training though and decided to do his first triathlon.

“I guess the competitive aspect never goes away. I did a triathlon on a bit of a whim last September, and didn’t do very well. I guess that’s where it began.” says Dunkerley.

In January this year he was paired with Cook by Triathlon Canada, and they are targeting the next Paralympics in Tokyo as the long-term goal.

Cook, 28, is a professional long-course triathlete, competing mainly in Ironman 70.3 events. He was recruited to be a guide by Carolyn Murray, head paratriathlon coach at the National Performance Centre, which is situated in Cook’s hometown of Victoria, B.C..

The team has now raced together three times, including a fourth place finish at the World Paratriathlon Series event in Edmonton in July. Being based on opposite sides of the country, training time together has been limited so far, with the majority of it coming in a one week camp in Magog, Que..

“That was the first block that we had together.” says Cook. “We’ve definitely seen some big improvements there.”

In events, there are specific rules governing the function of the guide during each discipline. On the swim, Cook leads the way, and the pair are tethered at the thigh. The head of the guide can never be more than 1.5 m from the head of the athlete, so Dunkerley swims in Cook’s draft zone, slightly behind and to the right. The guide leads around left-hand turns and taps the athlete on the head to let them know to lead around right-hand corners.

The bike leg is where the guide has the most influence on the race.

“We’re on a tandem with me as the pilot. You’re connected by the same drivetrain. That’s the one place where the choice of guide really does matter because you can work together and it’s a combined power output. You get going pretty fast.” says Cook.

In addition, the guide must communicate when corners or hills are coming up, and the best pairs have great timing so they put the power through the pedals together and aren’t fighting the bike.

On the run, Cook can’t be ahead of Dunkerley at any time, except for specific, technical sections of the course. His role is to provide verbal cues on direction, road condition, and distance remaining, along with some occasional motivation.

Dunkerley is already getting comfortable with Cook as a guide.

“I’ve been blind all my life so the trust thing for me is not a big issue. I don’t think about that. I think if I did I’d be more cautious. I just know that he’s going to look after me when we’re racing.” says Dunkerley.

Races are structured so that all visually impaired athletes compete against each other for the same medals, but there are different categories within this classification, from B1 to B3. Dunkerley is a B1 athlete, and is totally blind. B2 and B3 athletes are partially sighted to varying degrees. To try to make it equal, small time handicaps are applied, so B1 athletes get a slight head start on the other categories.

Dunkerley and Cook are currently focussing on the Paratriathlon World Championships in The Netherlands in September. In preparation, Dunkerley will spend some time in Victoria training with Cook.

Long-term, the time spent together will have to increase as they build towards Tokyo. Dunkerley currently has plenty of friends to act as guides in Ottawa, can train indoors on a trainer, and is comfortable swimming alone in a pool.

“When I swim, there are lane ropes. I either count my strokes or I’ve been doing it long enough now that you learn where the wall is.” says Dunkerley.

Cook has his own career, which Triathlon Canada are happy to accommodate, but acknowledges that his focus will have to shift approaching 2020.

“Carolyn [Murray] is quite supportive of me racing on the long-course circuit for the next couple of years.” says Cook. “As we prepare for Tokyo my commitment level to long-course will have to take a little bit of a backburner. It will be specifically focussed on the para side of things, but it’s still triathlon. I’m not anticipating a huge impact on my long-course career.”

This is still a very young partnership. They have come a long way in nine months and with three years to prepare for the paralympics, both Dunkerley and Cook are confident that they can compete with the best in the world.

As they get more familiar with each other, and Dunkerley transitions further from a runner, to a triathlete, it seems a real possibility that we could be seeing them on a podium in Tokyo in 2020.