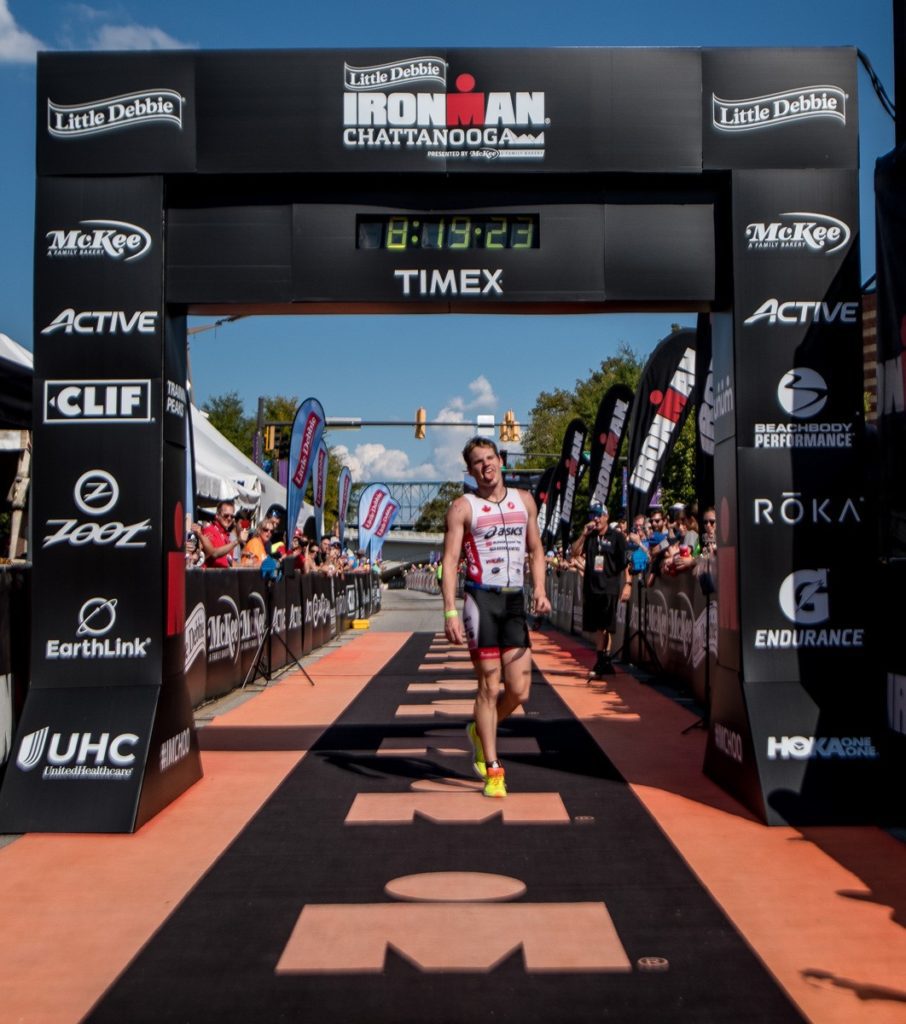 Fresh off earning the national long course champion title after his Challenge Penticton win, Jeff Symonds earned himself second place after a hard-fought battle at Ironman Chattanooga this weekend. The men’s only field at this race meant not only good points for the professionals racing, but a deep payout for athletes finishing inside the top 10. The course in Chattanooga seems like it should be a fast course on paper, but with the heat and humidity, and the extra four miles on the bike, insiders know it’s much harder than it looks.

First out of the warm river swim was USA’s Barret Brandon with Eric Linkemann just a few seconds in arrears. Another 3:45 back was a group that contained all of the contenders and the major players on the day. Matt Hanson (USA), Clint Kimmins (AUS), Marino Vanhoenaker (BELl), Jeff Symonds (CAN), Justin Daerr (USA) and Matt Russell (USA) were all in this chase group.

Quickly, two athletes made it clear they would be making their move on the bike with Vanhoenaker and Russell dropping their swim group mates quickly and bridging up to Linkemann by the halfway point of the ride. It was around this point where Vanhoenaker put pressure on Russell to knock him off pace, giving the sense that the Belgian might ride away with things. That he did, continuing to put time into his competitors all the way into T2 and coming off the bike with 3.5 minutes on Russell and over 10 on the chasers behind.

While the chasers probably believed that the uber cyclist was going to start losing time once on the run, they were quickly reminded that it takes some pretty fast running to go sub 8—as many times as Vanhoenacker has. He’s actually one of the very few athletes to have run 2:40—so there was no surprise when he didn’t seem to show any chinks in his armour even under hot and humid conditions.

The chasers put in some fast opening half marathons to try and dig into his lead, with Jeff Symonds rising to the top halfway, running 1:22 through the 13.1 miles. Vanhoenaker ran so well, however, that he was only out run by Symonds, who clocked a 2:50 on a day where only three runners broke three hours. The drama wasn’t just for the first two spots though, as the Matts—Russell and Hanson—had a back-and-forth battle for the last half marathon that would have them running quite close the entire way. Russell finally broke Hanson with four miles to go. Hanson hung on though to finish just 45 seconds back with the ever consistent Justin Daerr rounding out the top five.

No doubt it was a great win for Vanhoenaker—plus solid Kona points if he decides to make it back to the Big Island in 2017. Two athletes that had somewhat disappointing seasons not qualifying for this year’s world championship, Symonds and Hanson, will be set up well with some early momentum heading into 2017. Russell will use his positive performance as a momentum builder into Kona in two weeks (yes he’s racing!), as he generally performs well with some racing in his legs. It was an all around great day of racing in Chattanooga, no doubt a great venue, and host for the 2017 IRONMAN 70.3 World Championship. See ya there!