The swim begins at Kings Beach, on the Humewood Extension. Starting from the beach, triathletes will run/walk into Algoa Bay and swim counterclockwise around the 1.9K course.

The bike heads out of Port Elizabeth and onto the coastal roads of the Eastern Cape. At about 40K into the ride the athletes’ turnaround and diverge from the route they took out by going onto Marine Drive. The return trip has the triathletes cut through Nelson Mandela University and Nature Reserve.

The run begins from Hobie Beath (T2) and features a two-loop course. Hugging the coastline, the run is flat and fast with a little over 90 metres of elevation gain.

After swimming 1.9K, biking 90K and running 21.1K, those that complete the course will run down Beach Road and finish on the shores of Hobie Beach.

Who can stop Daniela Ryf? She’s a three-time Ironman world champion, as well as a three-time 70.3 world champion. Earlier this summer, Ryf set the fastest 70.3 time by a woman at IRONMAN 70.3 Gdynia in Poland. Her finishing time of 3:57:54 was over 20 minutes ahead of second place finisher Mirinda Carfrae and just 10 minutes behind the men’s winner Tim O’Donnell.

Last year’s runner-up, Emma Pallant will try to stop Ryf’s reign. As will Melissa Hauschildt, a two-time 70.3 world champion. Then there is Sarah True, an accomplished ITU racer and now a contender at the 70.3 and full triathlon distance.

Canada’s hopes will rest on the very capable shoulders of Heather Wurtele.”My two main focuses for the year have been The Challenge Championship in Slovakia, and the Ironman 70.3 Worlds in South Africa,” says Wurtele.

This year, Wurtele has won 70.3 Campeche and Challenge Geraardsbergen. She has also had a number of top ten finishes, including podium finishes at 70.3 Texas (third) and Santa Rosa (second). Heading into worlds this weekend, Wurtele will look to work her way through the field on the bike and run to earn another top placing. “The reality and strategy of any race I do with the best in the world is usually very similar. I’ll have a bit of a deficit out of the water, then I’ll use my bike and run to work my way up to the front.” It’s a strategy that’s worked for her in the past at worlds (three podium placings – 2014, 2015 and 2016).

With the race taking place on the coast of South Africa, Wurtele hopes the conditions play into her favour. “I’m hoping here in Port Elizabeth the wind and course will lend itself to some difficult bike conditions. I tend to have my best results where everyone struggles on the bike.” 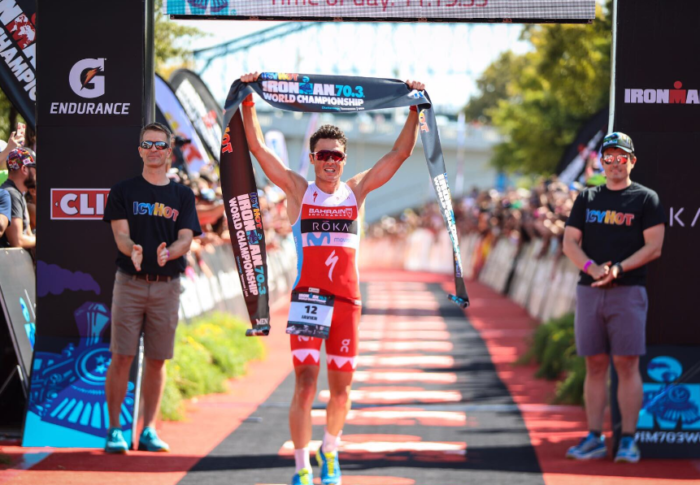 Gomez is the reigning 2017 champion and has earned the right to be called a favourite to win this year’s edition. With his pedigree at this distance and recent success at the Ironman, Gomez will be hard to beat on Sunday.

Appleton has had an impressive season so far. The Australian recently won 70.3 Santa Rosa.

Then there’s the man everyone will be watching – Frodeno. The German has had everyone’s number this year. Will Frodeno roll into Kona with the swagger of a two-time Ironman and 70.3 world champion?

There’s also last year’s runner-up – Kanute. The American in the past few years has proven he is a threat, if not a favourite at the 70.3 distance. Then there’s a pack of hunger athletes eager to prove themselves against the best long distance triathletes in the world.

Don’t forget about Brownlee. The Brit hasn’t raced much over the past year due to injuries, but the two-time Olympic champion has shown his speed at the 70.3 distance before. On September 2nd, if he isn’t marked closely, his speed may catch the other favourites off guard.

How to watch the race LIVE