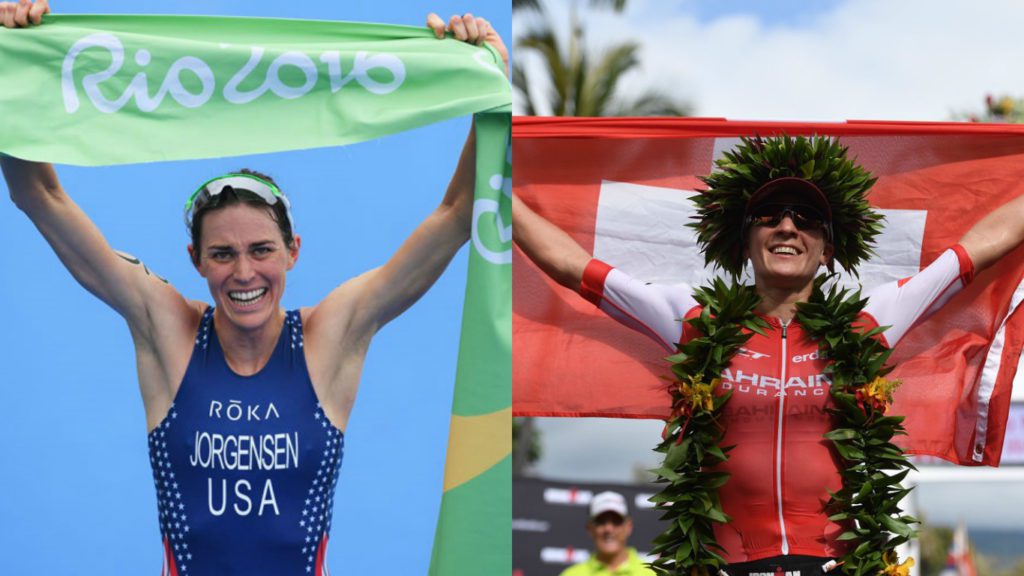 We’re looking for your help.

While we’re still waiting on our panel to come up with their decision, we thought we’d ask you to help us decide. Here are some arguments:

The case for Ryf

While I have no qualms seeing Gwen Jorgensen win this category, I have a rough time forgetting Daniela Ryf’s impressive year. She started things off by dominating the first leg of the million-dollar challenge (which she won handily last year) in Dubai, taking that race despite the fact that she was back at school with limited opportunity to train.

Fast forward a few months. After finishing her studies in June, Ryf arrived in Frankfurt for the Ironman European Championship. Surprisingly officials made the race a non-wetsuit affair for the pros, despite that race morning temperatures were about six degrees Celsius. Ryf dominated the swim, but 5 km into the bike found herself shivering uncontrollably. Within a few km she was on the side of the road desperately trying to warm up and would eventually be pulled from the race.

Fast forward two more weeks. Frustrated by the Frankfurt experience, Ryf’s coach Brett Sutton realizes that his athlete needs a good experience to get her back on track. She heads off to Challenge Roth. The goal? Have fun.

Ryf did that and more. She broke Chrissie Wellington’s bike course record in Roth by eight minutes. She posted the third fastest full-distance time ever, literally dancing across the finish line in 8:22.

From there Ryf went to Mooloolaba for the Ironman 70.3 World Championship, where she finished a “disappointing” fourth. It was the first time she’d done anything but win a race (that she finished) in almost two years. It closed the door for the million-dollar payday. More importantly, though, that performance piled on the pressure heading into Kona. For the first time in almost two years people questioned whether Ryf was the logical favorite heading into Kona.

Which all got forgotten once the race started. Ryf’s performance in Kona was so dominant that she literally could have had a shower, coffee and croissant at the finish line waiting for runner-up Mirinda Carfrae. In case anyone tries to say that she “didn’t face the same level of competition that Gwen Jorgensen had in Rio,” think about this: even though she won that race by almost 24 minutes, the woman she beat to do that was the former course record holder. On a day when Jan Frodeno went almost three minutes slower than the course record, Ryf’s 8:46:46 broke Mirinda Carfrae’s course record by almost six minutes.

Gwen Jorgensen’s Olympic performance was nothing short of incredible. She managed to overcome intense pressure to take that gold medal. She had to overcome some intense competition on race day. The Olympics were her main goal – she won that race in style. Along the way, though, she got beaten a few times and failed to defend her world title.

Does an amazing Olympic performance trump some of the most impressive long-distance racing the world has ever seen? – KM

The case for Jorgensen

To decide on the best female triathlete of the year, the most important consideration is who raced the best consistently against the deepest fields. The women’s fields in ITU racing are undoubtably far more competitive than those in women’s long course, non-drafting triathlon currently. While Daniela Ryf will likely go down as one of the greatest female athletes in Ironman history, she has never faced as much competition as Gwen Jorgensen has in the past four years, during which she established an unprecedented winning streak in the prime of the Rio Olympic qualification period.

Jorgensen has only ever named one goal over the past four years – she been fully committed to winning Rio gold. Nothing else has mattered.

She went from 38th with a mechanical at London 2012, to a back-to-back world champion in 2014 and 2015. Beginning with the win at WTS Yokohama in 2014, she won 17 races in a row — including 15 WTS races against the best women in the world, two grand finals, the Rio test event, and two national championships (there were two other American women with multiple WTS wins under their belt at those races). All the while, she still only had her eye on Rio. Her winning streak was broken this year by a second place to Helen Jenkins after she had already more than qualified herself for Rio. She bounced back to win her next race, WTS Yokohama in May, and then as a prep race for the Olympics decided to enter WTS Hamburg just a month out from Rio and still landed on the podium in third.

Over the course of her winning streak, fans took notice of her signature “kick” at the end of races. She regularly appears to be flying past her competitors on triathlon’s final leg, easily winning the majority of her races thanks to her improved and strategic biking and unmatched running ability. In ITU triathlon where strategy plays a huge role and finishers are separated by mere seconds, Jorgensen has proven time and time again that she’s the best of the best.

Jorgensen faced far tougher competition at Rio this year than Ryf faced in any of her 2016 competitions, with the possible exception of Ironman 70.3 World Championships where she didn’t even make the podium and lost to a serious underdog in winner Holly Lawrence. In Rio, Jorgensen faced the current world number one, star cyclist Flora Duffy, as well as a stacked three-member Great Britain contingent, her two talented USA teammates and most importantly, London 2012 winner Nicola Spirig. The most exciting and potentially challenging part of the race for Jorgensen? No one could predict what Spirig would bring to race day because the Swiss athlete had barely raced on the ITU circuit in recent years. In fact, Jorgensen didn’t race her at all in 2015.

Despite repeated breakaway attempts from Spirig throughout the gruelling Rio bike leg, Jorgensen, a relatively weak cyclist in the field, hung on tight and proved her biking was good enough for all the best women in the sport that day. Going onto the run, a determined Spirig still gave Jorgensen a good run for her money but by the last few kilometres of the run, it was clear Jorgensen had accomplished her four-year-old goal.

Less than a month after winning Rio, Jorgensen took second behind a highly determined Duffy at this year’s ITU Worlds in Cozumel. She then raced for the first time ever on the TT bike six weeks later and won her second consecutive Island House title over some of the sport’s best non-drafting specialists, including Lawrence.

There’s simply no comparison between the pressure and competition Jorgensen has faced and overcome this year and last, and Ryf. Ryf may have set the Kona course record this year, but she only faced one competitor of her world champion calibre that day – Mirinda Carfrae. By Rio this year, Jorgensen had been proving herself against multiple world champions and an Olympic gold medallist for almost two years. -CD