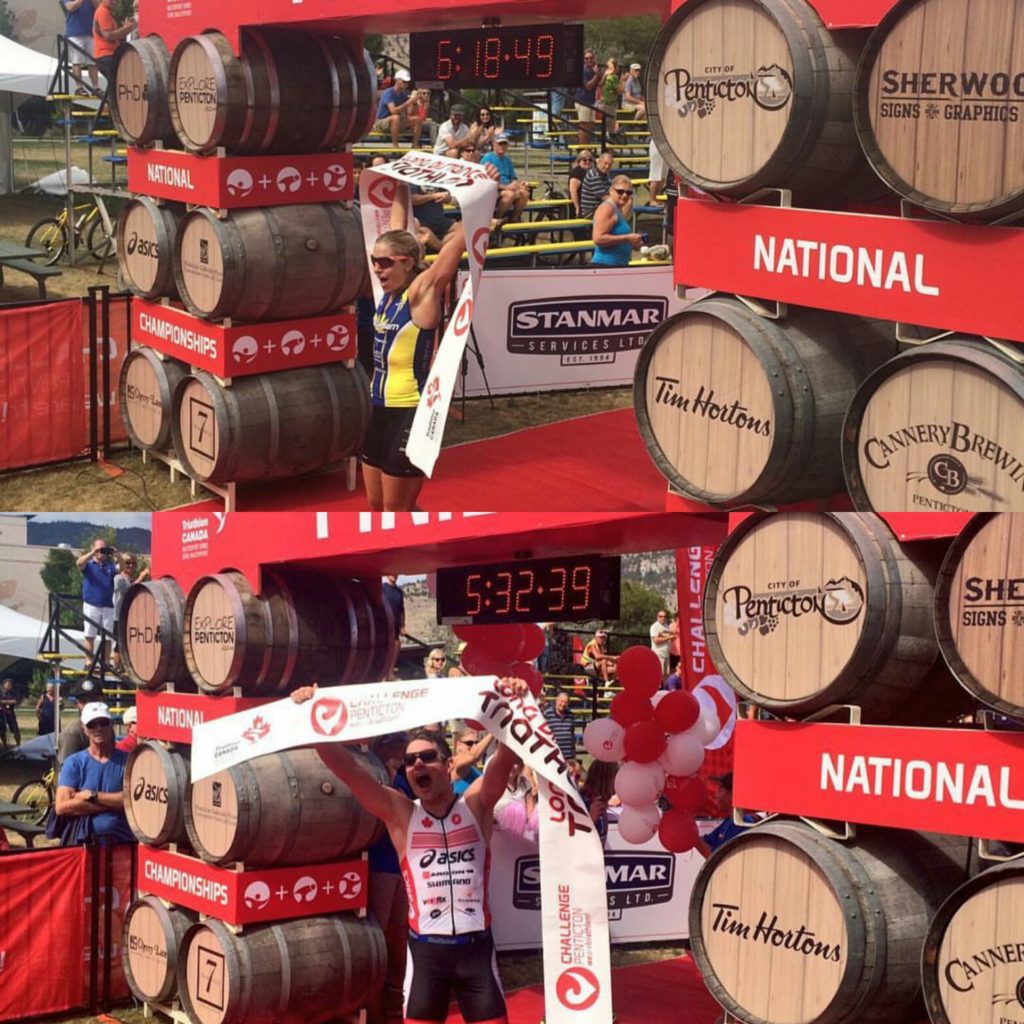 For Penticton’s own Jeff Symonds and Jen Annett, winning Challenge Penticton and being crowned national long course champions was extra special this morning on home turf. Knowing the course like the back of their hand, the two respective winners had an advantage heading into today’s race but both were pushed then entire way by the deep pro fields who lined up for this iconic Canadian race.

Both the men’s and women’s races were exciting from start to finish with neither overall winner taking the lead from the start.

Davide Giardini was the fastest man heading into T1 after a wavy, non-wetsuit 3 km swim in the men’s race and while his lead was solid, he was followed by a tight pack of Symonds, Jordan Bryden and Drew Scott. Scott would then take the lead and clock the fastest time for the 120 km bike course in 2:57:09. Giardini, the only other man to go sub-3 hours on the bike course, was hot on his heels and Symonds and Bryden were close behind him.

Symonds used his well-known running talent to take the lead on the run from Scott.

“It’s been a tough year and tough week and I was thinking about all the people who didn’t give up on me this year,” Symonds said with a huge smile minutes after his win. “Drew (Scott) is a better cyclist than I am, but I had faith in my running and you gotta have that confidence in what you do well.”

Symonds suffered an injury earlier this year that set him out of major races and forced him to take time off of training. Hear him talk about staying positive through adversity in our pre-race video with him.

“The triathlon community here in Penticton is amazing and it’s a huge honour to be a part of it.”

On the women’s side, Jen Annett had a similar story having to overcome a serious deficit on the swim to make her way to the lead.

Karen Thibodeau was the fastest pro women out of the water with Christen Brown close behind her. Annett was the slowest, but made up lots of ground on the bike where she clocked 3:13:42 and started making her way into the lead. It was a close and exciting race to the finish line and she sprinted to overtake Liz Lyles for the win. Her overall time was 6:13:49. Lyles finishes second in 6:14:19 and Thibodeau clocked 6:22:53 to take third on the pro podium.

“This is amazing, winning in my hometown,” Annett told reporters after the race. “I didn’t think I had it, Liz (Lyles) had me… she’s an amazing runner.

“My swim was terrible… I took it steady on the bike, stuck to the plan which felt awesome and I felt amazing going out onto the run. I stayed in my own race until the last kilometre or so and then decided to kick it up,” she said.

While Annett has stood on the podium several times this season, this victory is no doubt the sweetest yet as it means she’ll be racing the same race again next year for the world champion title at Penticton 2017, the inaugural ITU Multisport World Championships. Watch our pre-race interview with Annett here.