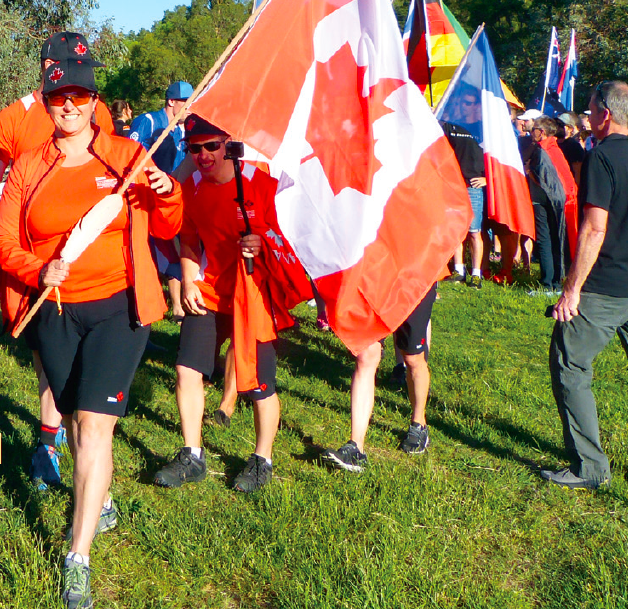 Helen Bobiwash wasn’t sure the bald eagle feather in her luggage would make it past Australia’s notoriously scrupulous customs agents, but it did. So, when she was introduced as the flag bearer for Canada’s five-person national team at the ITU Cross Triathlon Worlds in the Snowy Mountains last November, that precious white plume was in her hand as she hoisted the Maple Leaf.

“It was important to carry the eagle feather, to recognize my Aboriginal roots and to acknowledge that Canada was built upon the welcoming efforts of Aboriginal people,” Bobiwash said.

It was a proud moment for the 48-year-old Anishinabe woman from Sudbury, Ont., who had spent the last year wondering if she could – or should – take the spot she’d qualified for at the 2015 Mine over Matter race in Milton, Ont.

“Part of me was scared I’d be exposed to criticism for participating at worlds when I don’t expect to come in first,” she told Triathlon Canada’s age group team’s manager, Tenille Hoogland, when Hoogland asked her if she’d consider being the flag bearer. But her friends and family persuaded her to go for it.

“Ultimately, I feel like I represent the  ‘typical’ age grouper who does what they can in the sport while balancing the responsibilities of life,” she said.

But there is nothing typical about Bobiwash. She got into triathlon a decade ago, at a difficult juncture in her life. Her mother had just died after a long decline from the complications of diabetes. Her marriage had ended a year earlier and she was exhausted by the task of raising her only child on her own. Born premature, two-year-old Mzhiikenh needed frequent medical attention and Bobiwash, an accountant, had recently moved back to Sudbury from a small town more than an hour’s drive away to avoid the long weekly treks to the doctor.

Bobiwash had her own health issues, too. She was overweight, at high risk of developing diabetes and was waiting for meniscus surgery – the result of smashing her knees into the dashboard in a car accident two days after Christmas in 2006.

The YMCA in Sudbury became a lifeline, Bobiwash says. “They had childcare, so I could go for a swim or I could work on the weights and know my son was being taken care of.”

The Y also had a triathlon workout on Friday evenings. Bobiwash was in awe of triathletes – she’d sometimes run on a treadmill, watching televised Ironman events, glued to the screen.

“I’d think, ‘Wow! The things you can get your body to do when you decide, I’m going to do this,’” she said.

Thanks to the Y’s program she did a try-a-tri in Bracebridge, finding herself hyperventilating so badly in the 400-metre swim that she had to flip over onto her back to calm down.

“The only thing that kept me going was there were people behind me continuing to swim, and I thought, ‘If they can keep going, so can you, Helen.’”

“I found some really great people who were willing to step up and say, ‘You want to come for a workout? I’ll get my husband to watch your son.’ Or, ‘You want to go for a swim? My  son will look after yours,’” Bobiwash recalls.

“So people in the community made it possible for me to continue with my training and, eventually, to participate in events.” 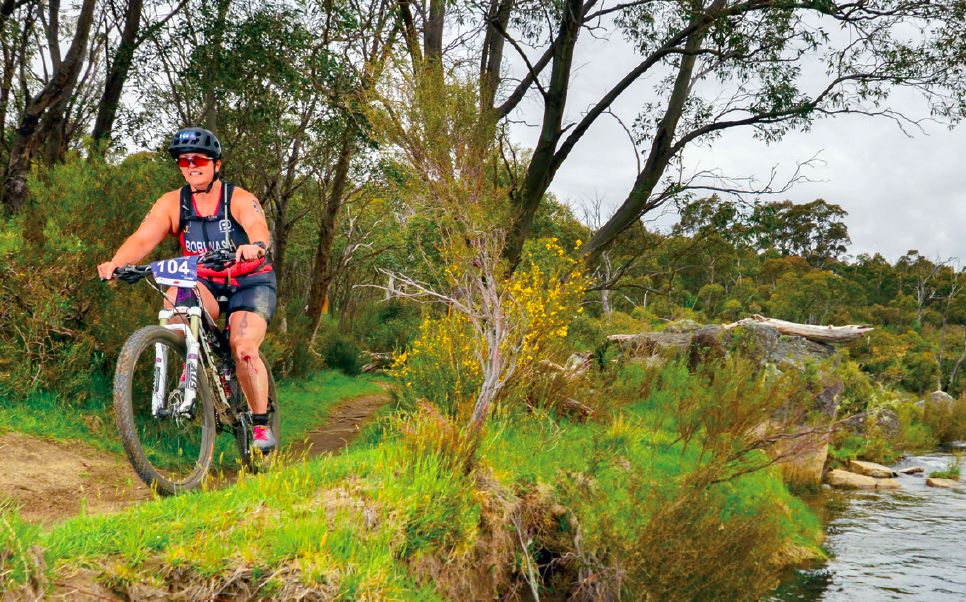 Her coach, 2015 Ultraman world champion Mike Coughlin, says Bobiwash gave as much as she got from Sudbury’s multisport community, stepping up to organize local events and inspiring others with her spirit and perseverance. Now based out of Guelph, Ont., Coughlin followed Bobiwash’s progress on Skype and helped her design a training program.

By 2014, she had a couple of 70.3 races under her belt, including Muskoka. But she found the training a grind.

“I’d be on my bike for three hours and nobody would want to come and join me,” she said. “I kind of lost the social aspect that I enjoyed.”

Then, in 2015, she did her first Xterra race, in Milton. She laughs at her audacity: She loved trail running, but she had no mountain biking skills. Still, she thought, “Why not try it?” She was terrified she’d injure herself on the bike course and, when she didn’t, she was ecstatic. At one point on the ride, a deer jumped across the trail, just metres in front of her.

“It just lifted my spirits to a whole other  level,” she said. “Then I hit the run.”

She recalls listening to the birds and watching chipmunks along the trail – then wiping out. She finished the race with a throbbing hand, finding out only hours later that she’d fractured it.

“But I’d had the best time of my life,” she said, vowing to do another cross triathlon. Simply by finishing the Milton event, she’d qualified for the 2016 Worlds. “There aren’t a lot of older women in cross tri,” she quipped.

After figuring out how much money she’d have to save up to get to Australia, she decided to go for it, aiming to be in the best shape of her life. Then, in October 2015, while mountain biking with a friend, she tore her right Achilles tendon. She was in excruciating pain, and deep in the bush. The only way out was to pedal one-legged, her right leg dangling behind her. Laughing out loud at the sight of herself, she thanked Coughlin, her trainer.

“We can finally tell coach that all those single-leg drills came in handy,” she told her friend.

Twelve weeks in a boot left her precious little time to prepare for the 2016 racing season and indeed, her right leg was still not 100 per cent when she made it to Australia’s Snowy Mountains in November. She knew finishing the race within the five-hour limit would be a challenge.

A fall 12 km into the bike course when her handlebar clipped a metal pole left her scraped and limping on the trail run, reduced to walking by the 2-km mark. With two laps of the three-lap course to go, an official pulled her off the course to get medical attention.

“I cried,” she recalls. “I knew after I fell that my race was over, but it was still disappointing when I was faced with the reality.”

Despite that, Bobiwash is grinning in every photo. And, two days after the race, she had healed up enough to participate in the relay event with her fellow Canadians, Brooke Darlington, Nathan Stewart, Alexandre Boyer and Chuck Fortier.

Bobiwash’s son, 12-year-old Mzhiikenh, was with her, rooting for her every step of the way. Simply exposing him to a healthy, active lifestyle makes her feel she is doing the best job that she can as a mother, she says, and that the world is his oyster.

Loreen Pindera is an editor at CBC News.