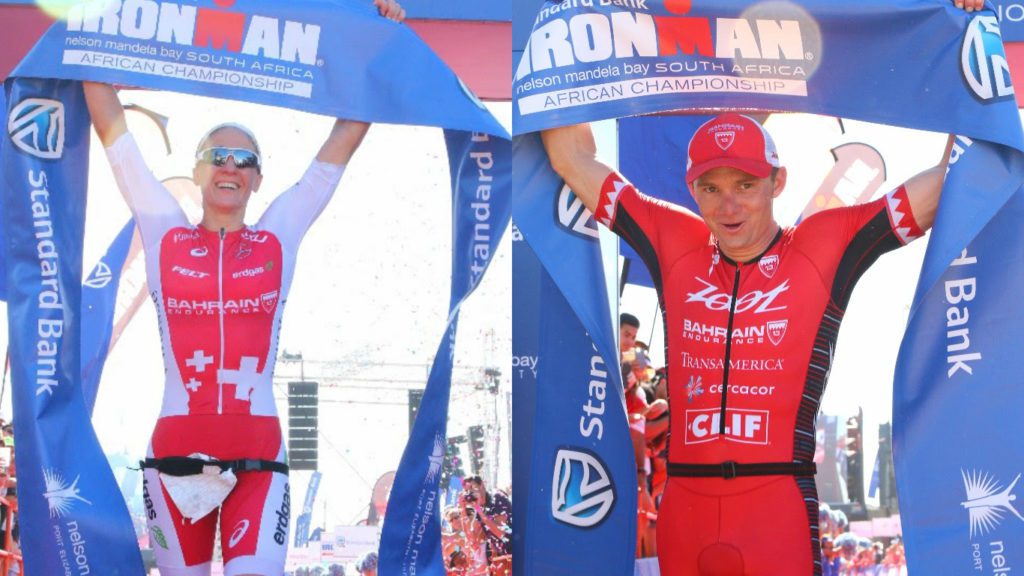 Hoffman’s successful title defense came with an unexpected bonus as the American logged a new course record and the first sub-8 hour finish on African soil. “I exceeded all my expectations and that wasn’t even on my radar,” he said. “It’s not a super fast course so to do that, I’m just blown away.”

Hoffman exited the 3.8-kilometer swim course a little more than a minute behind super swimmer Josh Amberger. Even as former professional cyclist Cameron Wurf blasted ahead through the 180-kilometer cycle course leading by three minutes, Hoffman stayed controlled in the chase group along with Amberger and Nils Frommhold. Once on the marathon, the real race was on between Frommhold and Hoffman. Frommhold, a previous winner, always stayed within a 30-second gap spurring Hoffman to keep pushing towards a finish time of 7:58:39.

“There’s no doubt that he pushed me to my limit and my best performance on the day for sure,” said Hoffman. “I knew I did the training and I knew I was ready, but I just had to execute and continue to believe in myself. There were definitely a few moments on the run where I started to doubt myself but the crowd support out here lifted me up. It’s absolutely awesome. When I finished first last year I knew there was no question I was coming back to defend, and it’s been a year now and absolutely no regrets. I hope to come back another time next year and defend again.”

On the women’s side, Ryf was tipped to break Chrissie Wellington’s 2011 record of 8:33:56 on a slightly different course. The record still stands; however, Ryf’s finish time of 8:47:01 was good enough for the win, and relegated defending champion Kaisa Lehtonen to second place by seven minutes.

The Swiss accomplished all this despite tweaking her back in the lead-up to the race. “I think it’s a bit of a miracle,” she said. “To be honest, I was preparing to go for 12 hours today, and I was really scared of the swim. I couldn’t swim for about 10 days and today I just hoped that my back would hold together and I’m so happy that everything went kind of the maximum it could go. I could swim quite okay, it hurt the most in the swim and then on the bike I gave my best and it took me awhile. In the beginning I was really struggling and then finally I could push my legs and then the run was also kind of okay and I’m really surprised how it went.”

Ryf exited the water in front, but sat in fourth on the bike until the 133rd kilometer when she made her move to the front. Once there she never looked back, gapping her chasers by three minutes leading into transition and continuing to build the lead from there until the finish line. She said, “I’m super happy and also a big thank you to the crowd today, they really cheered me on and of course thank you to my coach because the last week was not so easy. I was very close to not coming, and I’m really happy I came here to South Africa and I could celebrate such a great win.”

Canada’s Jenny Fletcher was thrilled with her sub-10 hour finish at her second-ever full distance race in the heat yesterday.

“It was a tough day out there for me but I couldn’t be more pleased given my last minute decision to enter this championship race, and the little prep I had to race such a massively stacked Ironman South Africa race,” Flecther said in a social media post. “I battled out there and several times thought about just calling it a day. But what makes an Ironman so rewarding is overcoming all the struggles and crossing that finish line as I said before in my pre race comments.”