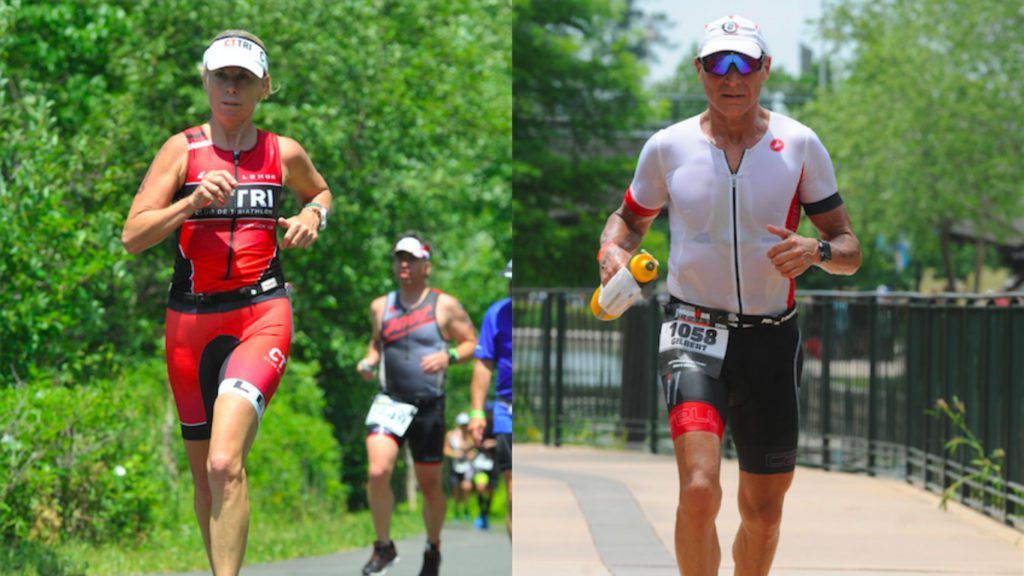 This story originally ran in our September/October 2016 issue.

Gilbert Ayoub screwed up the courage to ask Arlene Turner out on a date at Arlene’s 15th birthday party. The timing and the approach was thought out in advance, the plan discussed with his best friend Bob. To his delight, Arlene accepted.

They both grew up in the Montreal neighbourhood of St. Leonard, but they had little else in common: Gil was quiet, athletic and intense, Arlene, his polar opposite: vivacious, outgoing and – oh – she had no interest in sports. Nada.

“There were a few other boyfriends,” Arlene insists, but Gil’s persistence won out, and on Oct. 2, 1976 – two days before Arlene’s 20th birthday – they married.

Fast forward forty years, and the unlikely pair is still together – grandparents now, four times over. Next month, they’re going to Hawaii to celebrate 40 years of marriage and their respective 60th birthdays. And on Oct. 8, they’ll be at Kailua Pier for the Ironman World Championship.

The Ayoubs have 22 Ironman races between them.

“This was never on my horizon,” says Arlene, recalling her first Ironman in Penticton in 2005 – two years after she learned how to swim.

“I was standing on the beach, crying,” she says. “Then Sister Madonna [Buder, the ‘Iron Nun’ and world’s oldest Ironman finisher, at 85] prances by and says, ‘Isn’t this a blessed day?’” That was the boost Arlene needed to overcome her fear, but she  laughs at the photo of her getting out of Okanagan Lake an hour and 35 minutes later.

“The picture coming out of the swim is me, looking backwards, to see if there is anybody behind me,” she says. “I was sure I was last!”

Back in the early 1970s in St. Leonard, “exercise just wasn’t part of the recipe,” Arlene says.

“Girls didn’t even have gym.” In the Turner household, the boys were even fed differently.

“My brothers played hockey, so they got steak.”

Gil, on the other hand, was sports-obsessed, adventurous and ready to try his hand at anything. In his 20s, he raced Olympic-class Tornado catamarans and windsurfed in summer, played squash and worked as a ski and snowboard instructor in winter. He persuaded Arlene to take up martial arts, both of them  earning black belts in aikido.

Then there was polo.

“He got into it through a family member who had horses,” Arlene says. “I have a memory of me holding our son Christopher in my arms – he was probably four months old – and a two-year-old at my leg, and my husband was taking off to go play polo on a Saturday morning. There’s me, just standing by the window, crying.”

“Those were the years I had to persist through.”

“Arlene wasn’t a horse person at all,” Gil concedes.

Eventually, polo was replaced by mountain-bike racing. And Arlene, in her 40s, discovered running.

“I started to get away from everybody,” Arlene says. “It was simple. Put on a pair of running shoes, and go.”

“The runner’s high – I’ve definitely experienced it. That moment of clarity. It’s seconds, it’s so brief. Everything is perfect in the universe.”

She was also a natural, finishing in just over two hours in her very first half-marathon, at 47. Now on the cusp of 60, she is faster than she’s ever been.

Since the foot races morphed into triathlons, there have been several training mishaps – a face plant when her bike hit a crack in the road in Italy, an unchained pair of pitbulls that attacked as she was riding in Hawaii last winter. The bites required stitches and stalled her training for weeks.

But what Arlene and Gil share, finally, is tenacity. Ironman Texas earlier this year proved it.

“We are both very strong runners, and we count on winning the race in the run. That is exactly what we were up to when there was a terrible thunderstorm, and they stopped the race.”

A half hour later, the race was restarted, and Gil and Arlene kicked back into gear – both cruising into first place in their age groups. They found out only the next day, at the awards ceremony, that officials had decided to count the race only up until the first crack of lightning.

They contested and got their Kona spots. While they waited, they prepared themselves mentally, in case their appeal was rejected.

“This was my 13th Ironman, and it’s the best I have ever felt,” says Gil. “Because of preparation, changes I have made in nutrition and the way I trained, I thought to myself, ‘If we don’t get it, it doesn’t matter, we can do it again.’”

Arlene gets credit for the change in Gil’s full-tilt approach.

“I’ve been coaching her all this time – as much as a husband can coach a wife,” he says. “Through her whole Ironman experience, Arlene would never push too hard. She always raced with a smile.”

“I was pushing hard and having stomach issues, trying to eat even the smallest thing. Fifteen years later, I realize, she had it right all along – so, as much as I was coaching her, she taught me to slow down, and by slowing down, I was able to stop all the gastric issues I had, and I do much better.”

“So, we’re both learning from each other.”

Arlene says her racing style reflects her attitude to marriage.

“You never know, when you show up for a race, how the weather is going to be, how you are going to feel. It is all about the training. Married life, too, is all about the day-to-day stuff. It’s not the big events – not the wedding, not the anniversaries.”

Those who make it through 40 years together are not superheroes, she says. “They are ordinary heroes.”

Gil, never effusive, cannot say enough about what he has learned from his wife about acceptance and adaptation and tenacity. Three decades ago he wasn’t there to take his kids to Saturday morning swimming lessons. Now he is omnipresent for his grandkids.

As a triathlon coach, he sees other young couples struggle, one person making more concessions than the other.

“We are so lucky,” he says. “Our social life revolves around the training. It is fun to look forward to doing this together.”