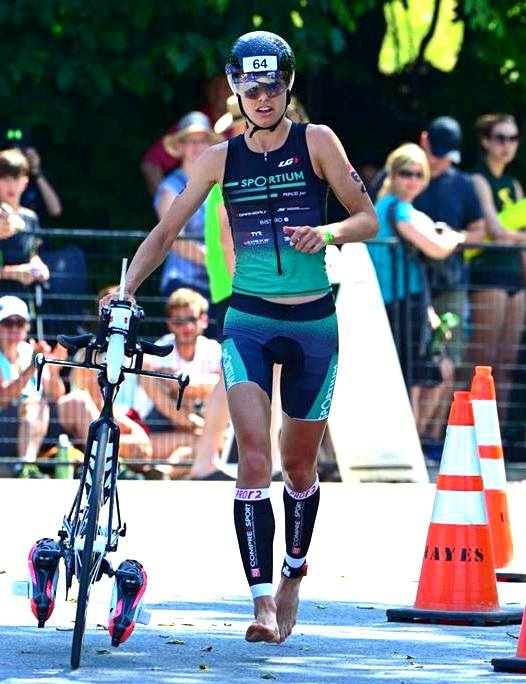 Twenty-one year old Stephanie Roy impressed Canadian triathlon fans with her second place at Ironman 70.3 Puerto Rico on the weekend, proving age isn’t an obstacle when it comes to competing with the best in long course triathlon. We’e profiled her before as an impressive junior, but now that Roy is competing in the big leagues — and showing great potential — we caught up with her to hear more about her triathlon career.

What’s your athletic background and how has it played into shaping you as a strong long course triathlete?

I started the triathlon 11 years ago. For several years I’ve been racing on the elite circuit in Quebec. During those years my passion for triathlon continued to grow, but I was also challenged on several occasions as I took last place in several races. Those races have allowed me to build my mental strength which now allows me to perform across the longer distances.

How are your training weeks structured right now given that you’re a student as well?

My weeks are quite busy as I am studying Occupational Therapy full time and I train between 20 and 25 hours a week. My coach is Pascal Dufresne, who is based in Trois-Rivières (outside of Montreal) and has set up a training facility for high-level triathletes. This is a great place to get together for training with elite athletes such as Pavlos Antionades. Being a student at the University of Quebec in Trois-Rivières, I train with the university swim team coached by Charles Labrie, six times a week. This year one of my priorities has been to work on my physical conditioning by including three strength training sessions of 75 minutes each week. During the winter, I run about five times a week with sessions ranging between 30 minutes and 90 minutes for a total of 50 to 70 km. I also ride on a Computrainer for periods of one to two hours with two sessions at high intensity. Depending on the training phase, the mileage may increase and the emphasis will not be on the same aspects. There will be periods of low intensity and the long intervals as well as those with speed, all according to the time of season.

What are your strengths as a triathlete?

I’ve realized my best performances are in high temperatures — my ability to perform well in the heat is a big strength. Another is the fact that I thrive in long distance training. Being an introverted person I love spending hours alone on my bike or running. I’m good at maximizing my workouts and ensuring that I remain healthy and get optimal recovery. For the half distance specifically, I believe that my running definitely made me stand out during my most recent race, Ironman 70.3 Puerto Rico where I had the fastest split.

How did Ironman 70.3 Puerto Rico play out for you?

The race in Puerto Rico was incredible because it allowed me to see my evolution as a triathlete.

Living in Quebec, I’m used to the long winter months which make it impossible to ride outside, and sometimes difficult to be ready to race in March. I was fortunate to do a training camp in Florida before heading to Puerto Rico, allowing me to get used to the heat. I managed to have a great start and make it into a good pack on the swim. I got out with good cyclists, such as Tine Deckers. The bike course had some ascents, but the biggest difficulty was the wind coming from the sea. About 30 km from the end of the bike course I managed to detach myself from the small group of girls I was riding with and have a small gap lead heading into the run. My legs felt great and since I was feeling confident, I felt the run could give me a shot at my first pro podium. During the turn-around I was able to see ahead and saw the two leading girls. About 4K from the finish I saw Helle Fredericksen, who was only a few meters ahead of me. I seized my chance for second place, and surged ahead. I was able to widen the gap to cross the finish line with a time of 1:22:59 on my half marathon. My final time of 4:18 was just 29 seconds off first place.

What’s next for you on the race calendar and what are your goals for the year and beyond?

My next race will be Ironman 70.3 Texas. Given my young age and limited experience over the distance, the objectives for this year were mostly to work on my weaknesses. I have worked extensively on swimming and done a lot of work in strength building. I’m looking forward to the day I participate in my first world championships as a pro. With the points I’ve already accumulated in my three races to date (Ironman 70.3 Timberman, Ironman 70.3 Augusta and Ironman 70.3 Puerto Rico), I consider it realistic for me to achieve this in 2017.

The ultimate goal in my career is like most — to win a world championship.

Do you feel your young age is an advantage or disadvantage in your pro career right now?

I consider it an advantage since I have many good years ahead of me to continue my progression! However, I believe that for now I have to gain a lot of racing experience and mileage on the bike. I believe that my youth and the fact that I participated in only five Ironman 70.3 pro races means I don’t know my limits yet which could possibly have an impact on my performance. I still have a lot of learning to do in order to maximize my consistency.