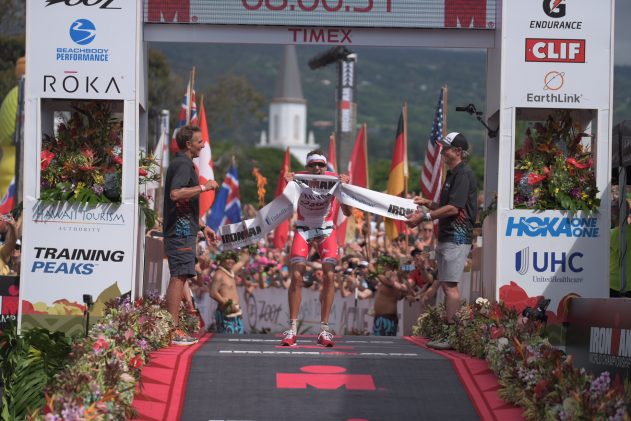 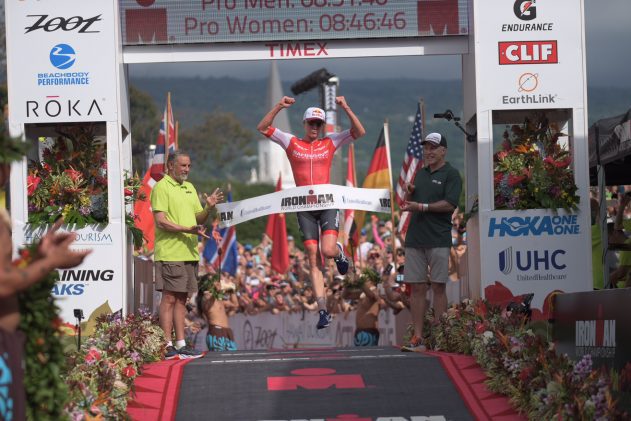 Records were broken today as the 2016 Ironman World Champions were crowned in a race that was nothing short of exciting from start to finish in both the men’s and women’s field. Jan Frodeno sailed to his second consecutive Kona victory in a time of 8:06:33 and Daniela Ryf smashed the course record on her way to a second consecutive Kona win, taking minutes off of Chrissie Wellington’s time in 8:46:46.

Jan Frodeno pushed the pace out front from the start of the race and many expected the German to earn himself a repeat win after a great swim set him up well for the day. Great Britain’s Harry Wiltshire was the first man out of the water at 48:00, leading a group of 12 made up of Andy Potts (USA), Paul Matthews (AUS), Marko Albert (EST), Denis Chevrot (FRA), Brent McMahon (CAN), David McMamee (GBR), Igor Amorelli (BRA), Andi Boecherer (GER), Tim O’Donnell (USA) and Tim Don (GBR). A second large group exited the water about 30 seconds later and contained several contenders including Terenzo Bozzone (NZL), Andreas Raelert (GER), Frederik Van Lierde (BEL), Ben Hoffman (USA) and Timothy Van Berkel (AUS).

Kienle, Austria’s Michael Weiss and Canada’s Lionel Sanders worked hard to gain on the leaders. The size of that group meant that drafting was nearly unavoidable for chasers. Several men served penalties including Brent McMahon, which ultimately took him out of contention on the bike.

The leader changed several times before the run but it was Frodeno who came off of the bike in first. Behind him were Kienle (4 seconds back), McKenzie (13 seconds back), Hoffman (19 seconds back), O’Donnell (25 seconds back) and Stein (41 seconds back). With all of the other athletes more than 3 minutes back it became clear that the winner would come from this group of eight.

Once onto the marathon, Frodeno maintained his lead with only Kienle able to keep the same pace. He looked strong all the way to the finish line and clocked a 2:45:34 marathon to cross the finish line in 8:06:30. Kienle capped off his day with a 2:49:03 marathon to finish in third at 8:10:02. Lange worked his way through the field all day, running from 23rd off of the bike to third at the finish line—posting a 2:39:45 marathon to break the 27-year-old course record of 2:40:04 that Mark Allen set in 1989. The all-German men’s podium was the first since ’97.

Daniela Ryf had a storybook race and earned her second-straight Ironman World Championship today, posting a 52:50 swim, a 4:52: 26 bike and a 2:56:51 marathon to defend her title in 8:46:46, establishing a new course record. The victory makes Ryf the eighth female to earn more than one Kona title and the fifth female to successfully defend her crown. While Ryf dominated the day, Rinny gave fans an exciting race on her quest to make up serious ground on the run and earn herself second while Heather Jackson worked hard to round out the podium against several contenders.

Ryf was one of the first women out of the water and quickly established her lead on the bike after T1. The nearest pursuers—Kessler, Swallow, Vesterby, Luxford and Kaye—sat at three minutes back, but the real concern was how far back the stronger runners had fallen. Jackson and Hauschildt—touted as two of the athletes to watch in this race—sat at more than eight minutes back with Carfrae at more than nine minutes back.

Ryf left no question in anyone’s mind that it was her day, cruising through the entire marathon well within course record pace. She looked strong all the way to the finish, breaking the tape to smash the course record in 8:46:46.

“That was my best race ever,” Ryf said at the finish line. “Thanks so much to my team. You cannot imagine. … I doubted all week whether I was strong enough on the bike after Mooloolaba and now I’m breaking the record in Kona. I didn’t even feel any pain.”

Australia’s Carfrae was the woman to watch after Ryf as she used her incredible running to move up from that 13th position off of the bike to second at the finish line, capping off her day with a 2:58:20 marathon to earn the runner-up spot in 9:10:30. In only her second time racing in Kona (she finished fifth last year), Jackson finished third and was the first American woman on the podium in 10 years.

Canada’s Heather Wurtele finished in 12th as the top Canadian.

We will have a full recap of top Canadian performances up soon.