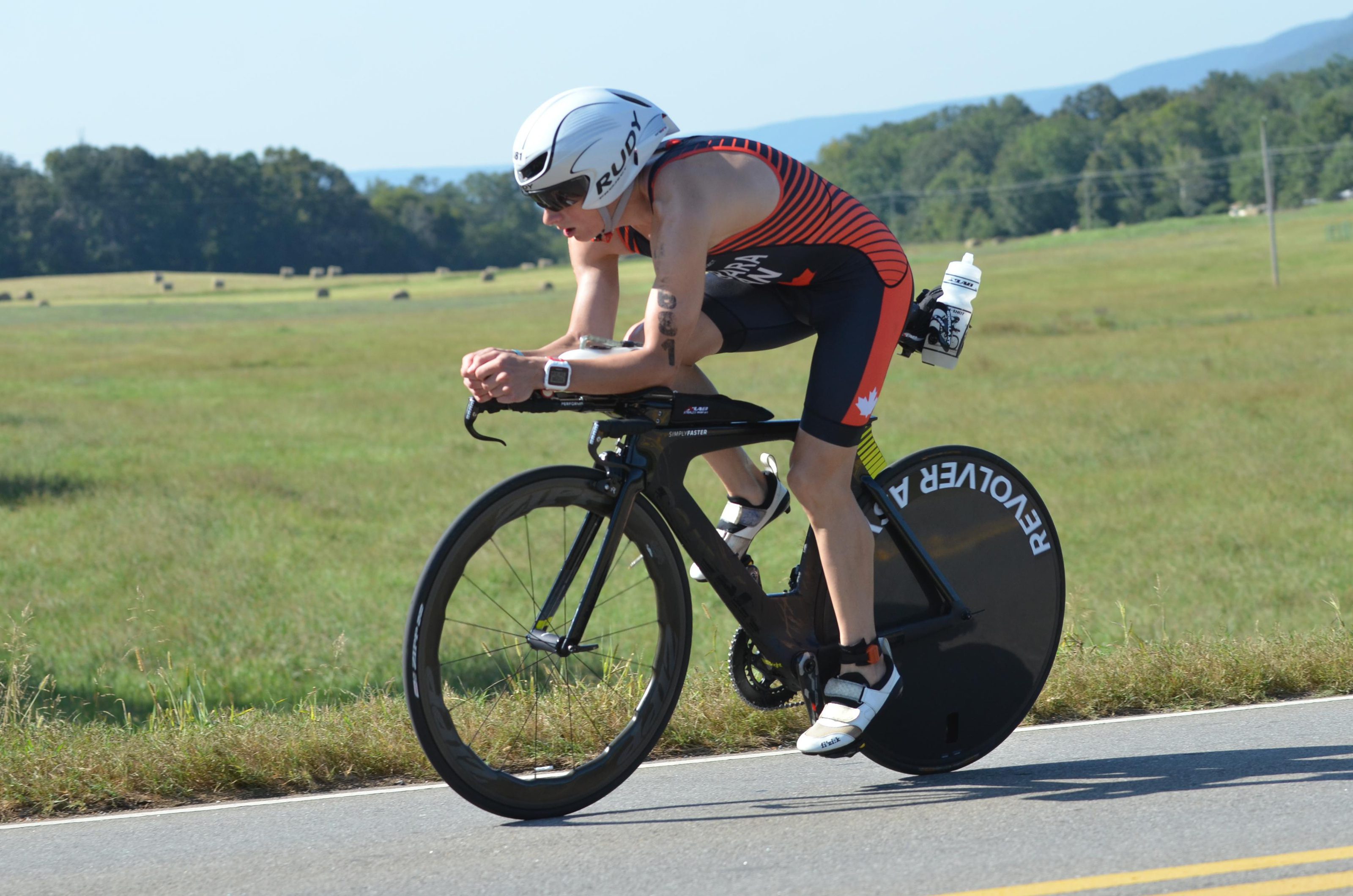 Hamilton, Ont.’s Frank Sorbara was the fastest Canadian male age-grouper at Sunday’s Ironman 70.3 World Championship. The 24-year-old placed sixth in his 25 to 29 age group with a time of 4:1835, and raced just coming off the overall age group win at ITU Long Distance World Championship in Penticton. We chatted about him with his race and experience in the sport right now.

How did you get into triathlon?

In 2010, when I was in first year university, I had an idea to run a marathon. I had run cross-country, and track and field in elementary school and high school, and after watching a documentary called the Spirit of the Marathon, I became obsessed with trying to complete the incredible challenge that the marathon would pose. I really didn’t know much about structured training or anything, my training was pretty much just going outside and running progressively longer and longer. No GPS, no speed/pace, just a stopwatch and a route that I would write out on a piece of paper. I ran my first marathon in May of 2011, and qualified for the Boston marathon with my time, as well as winning my age group. All I remember is not being able to walk for about a week afterwards, but that just made me even more fascinated with the challenge. I signed up for another in October, took 15 minutes off my time in May and my journey began to keep cutting time year after year until hopefully I could run a qualifying time for Team Canada and the Commonwealth Games. In 2013, I had a great year winning a number of half-marathons and finishing as the 6th Canadian at the 2013 Scotiabank Toronto Waterfront Marathon. Things were looking up. However, in 2014, I got stuck in a long cycle of injuries that just wouldn’t seem to end. It was stress fracture after stress fracture (more than 10 total), hip injuries, knee problems, anything and everything and I tried to run through them all. Later that year, I started swimming, and biking in the times that I was injured so that I could maintain my fitness. As 2015 came around my training was starting to look more and more like a triathlete, and in August of 2015 I competed in my first triathlon which I won, did another as couple weeks later which I won as well, and I was hooked. My biking was very strong from the start, my swimming was okay for someone without a background in competitive swimming but I definitely needed some help with it in order to be competitive with the best. So in 2016, I started to work with Sheryl Ross, a phenomenal triathlon coach and swim coach and instantly my swimming was getting better and better, as well as my nutrition (which Sheryl also helps me with). At the end of 2016 I competed in USAT Nationals for Long Distance where I won the National Championship for my age group, and that qualified me to compete at the ITU Worlds Long Course in Penticton. In 2016 though, my stretch of injuries continued with a major hip injury of a full-thickness labral tear, and significant cartilage and bone damage. Penticton looked like it would be a stretch. Luckily I didn’t need surgery, and I kept training very hard, and went on to win the Overall Age Group World Championships. With that win, I qualified for my professional card for the 2018 season, where my goals are to finish on the podium at multiple 70.3 events, and I hope to return to the ITU Worlds in Denmark to go after a top 10 in the Long Distance World Championship.

At which race did you qualify for 70.3 worlds this year?

I qualified for the 70.3 Worlds at Ironman 70.3 Wisconsin. In that race, I had a fantastic swim and bike and was in second place overall off the bike, but the hip injury (at this point still hadn’t received the MRI results), and a hamstring injury I’ve been carrying and running through since November of 2016, started to hurt real bad only about 2 miles into the run. With the injuries making me expend more energy in the 42-degree heat, I was forced to stop at the 8km mark. I was on the ground getting iced poured all over me, crying in pain for more than 20 minutes. Medical came asked me if I wanted to stop. I said I would try to just walk a bit first before making a decision, and got up and just started running. I have no clue how I ran the last 13km with how much pain I was in, but I finished and was still on the podium for my age group, and that got me my qualifying spot for Chattanooga. 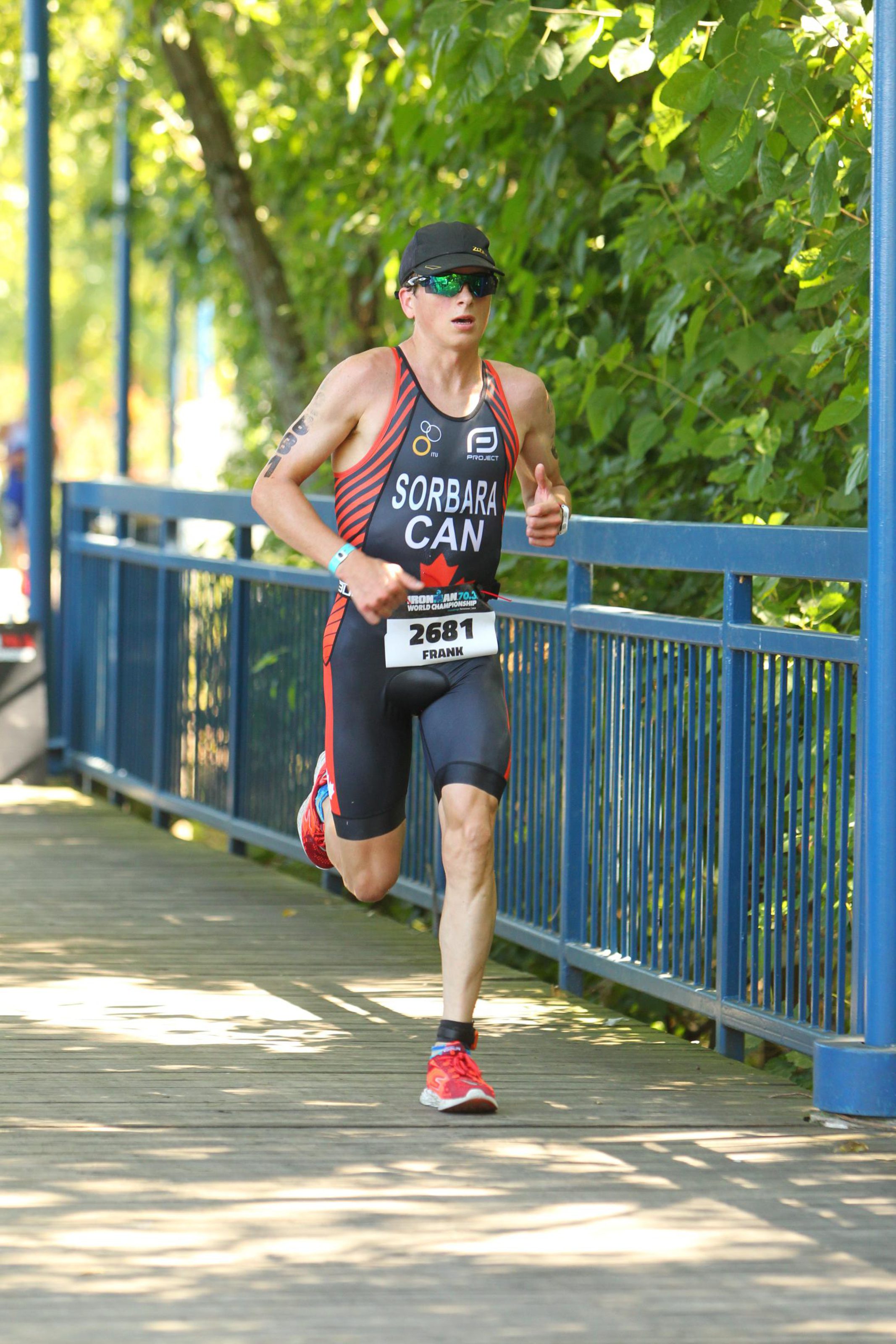 How did you train to prepare for 70.3 worlds?

I had ITU Worlds in Penticton just two weeks before Chattanooga so the training for Penticton served as my training for Chattanooga as well. Luckily both courses were quite hilly, which in addition to suiting me well since I really excel on climbs, it also meant the training for both would be similar. After my win in Penticton, I took it easy for a few days, and then did a very hard four day block Friday to Monday with very specific, high intensity workouts specific to the demands for Chattanooga. Also in my build for Penticton, I did quite a bit of heat training on the indoor trainer (I do 99% of my rides inside on the trainer), and Chattanooga was also supposed to be hot, so I carried that training through as well.

Tell us about your race in Chattanooga

My wave started at 9:04 more than an hour and a half after the pro wave. This made for a pretty chaotic swim and bike where I had to weave all over the place to get around people, and made it so in both the swim and bike my efforts were not steady like I planned, instead having to surge repeatedly to get around people. Overall my swim was what I expected given the wave start and that it was a net up current swim. I felt very good throughout the entire swim, and my endurance that I built up for the 3km swim in Penticton, definitely showed here since at the end of 1.2-mile swim I felt great. Out onto the bike, I had a fantastic climb up Lookout Mountain, the 5.5km long monster climb, where I distanced myself from the majority of the field. The descent was very fast, which I’m not too big of a fan of coming from indoor training, but held my own and was able to keep pace with my main competitors. Overall the bike was pretty chaotic, and it was a little frustrating to see some large packs of people clearly drafting, however, I didn’t see many penalties (only one). In the end, I had a solid time on the hilly course, and I rode almost exactly at the power that I planned a couple weeks before. Best of all, when I got onto the run, my legs felt great. I had a lot more confidence going into the race in my run legs than previous races, since I was finally able to put a stretch of uninterrupted run training in before the race. Also, in the last two weeks had started doing some speed workouts again which gave me a lot of confidence knowing that I could maybe push the pace a little harder. Unfortunately my hamstring became a big problem on the downhills, but just kept relaxed and tried to ignore it. Despite the hamstring, my legs still felt full of energy, and had my best run by far off the bike in the 70.3 distance running a 1:21 on the challenging course. I finished the race in 4:18, and as the number one overall Canadian Age grouper.

Were you happy with the result?

I was really happy with this result considering how difficult the course was and the way the race played out with the late wave start, but I still know I have lots of room to improve. The 1:21 half on this course was good and was right there with some of the pros, but I know for sure I can run so much faster than that once I get this hamstring issue settled, and can have a longer run build heading into the race. After my injury in March, I didn’t run for close to five months, and only started running again in the last week of July. Also considering my number one “A race” of the season being in Penticton only two weeks before, plus all the travel in between both to and from Penticton, and then the very long drive to Chattanooga only a couple days before the race, the result was much better than I expected. I am also happy and excited about the result since it was only a few months ago after I got my MRI results back on my hip that I thought the season was over entirely. I thought Penticton for sure would not be possible, and that Chattanooga so soon afterwards would be even more of a stretch. I thought that I even if I were able to do Penticton I wouldn’t be walking for a few weeks afterwards, but then if you said I would be top Canadian age grouper in the 70.3 Worlds two week later, I would say that’s crazy. So I’m very happy with the result.

What race is next for you?

I will be racing one more 70.3 to close out the season either at the end of October in 70.3 Miami, or 70.3 Austin or in November for 70.3 Los Cabos. For my final race of the season I would like to put up a very fast time something around 3:55. With a longer run build, and then continuing to improve on the swim with Sheryl, I think it’s definitely doable.