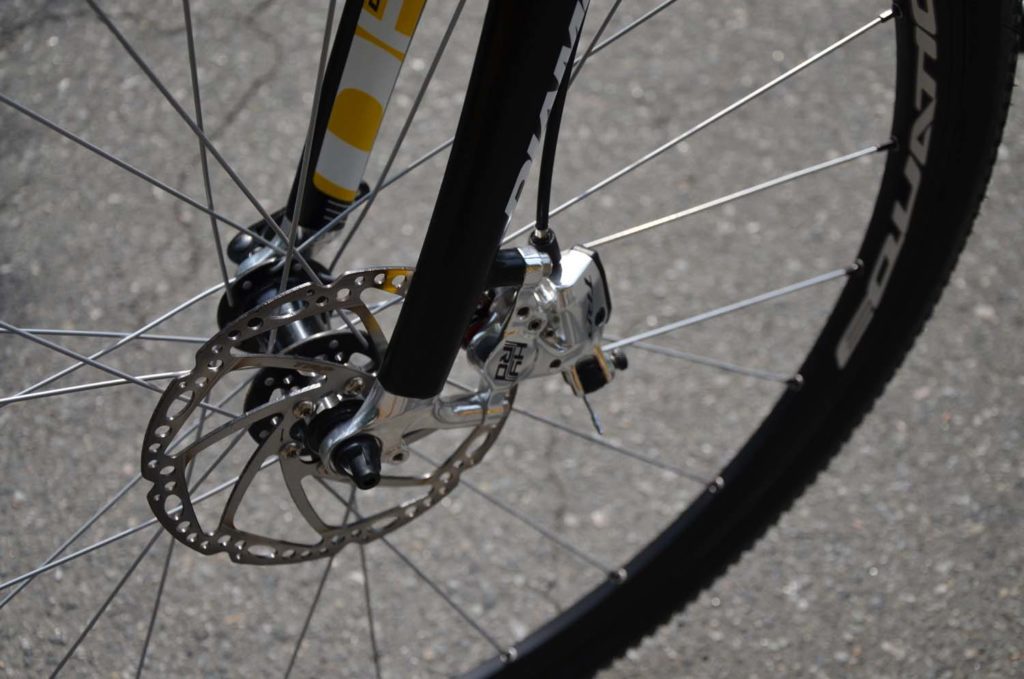 Disc brakes on road and TT bikes are arguably the most significant technological advance in cycling in recent years. Pop into any high-end shop and you’ll see many of your favourite road rigs with brakes migrating from fork crowns and stay-seat tube junctions to snuggle closer to wheel hubs.  Bike builders are typically good at reading their customers, so the explosion in disc brake builds is a testament to how these customers are voting: disc!

There are many pro and con arguments. The points below are not exhaustive, but are a good starting point if you’re considering disc brakes for your triathlon-specific N+1.

Most equipment testers and manufacturers agree that disc brakes and high-end traditional rim calipers offer more-or-less similar braking performance in dry conditions. Add some wet to the roads, however, and rim brake performance degrades quickly. Do you train or race in the rain? Then you ought to care.

A less ubiquitous tick in favour of discs is braking performance on technical descents. Braking generates heat. Heat builds up in the braking surface. Disc rotors and disc calipers are designed to shed this heat, but rims and rim brake pads are not. Now this isn’t a huge deal with alloy rims, but does cause some decrease in braking performance in carbon wheels.

Until recently, disc setups were heavier and decidedly less aero than traditional calipers. That’s changing. With better manufacturing and material selection disk brakes are getting lighter. On the frame side, builders are introducing integrated fairings to hide the calipers from the wind.

With more wheel builders offering disc options, it is now safe to say that disc brakes are more versatile than their rim brethren. This is due to two considerations.

Following Francisco Ventoso’s scary encounter with a disc rotor at last year’s Paris-Roubaix, the UCI banned discs in all pro races. Some national federations went as far as banning them from amateur events too.  If disc brakes were inherently dangerous, one would expect an clear spike in brake-related injuries with the rapid rise in popularity of disc-equipped bikes. The research doesn’t seem to support this. While there is the occasional, anecdotal case of injury from rotor contact, there is no trend.

It’s worth noting that the vast majority of age group triathletes compete in races where drafting is not permitted, so the odds of coming in contact with a disc rotor of another competitor are slight.

The preceding discussion is, of course, moot if disc brakes are not permitted by the governing body sanctioning your race. As always, it pays to know the rules. At present, the ITU rules for competition allow disc brakes for draft illegal races and prohibit them in draft legal events. This rule filters down to both Triathlon Canada and Triathlon Ontario sanctioned races.

There is no indication that ITU or national federations will make discs legal in draft-legal racing. Should they change their minds, the earliest that a rule change can come into effect is December 2017.