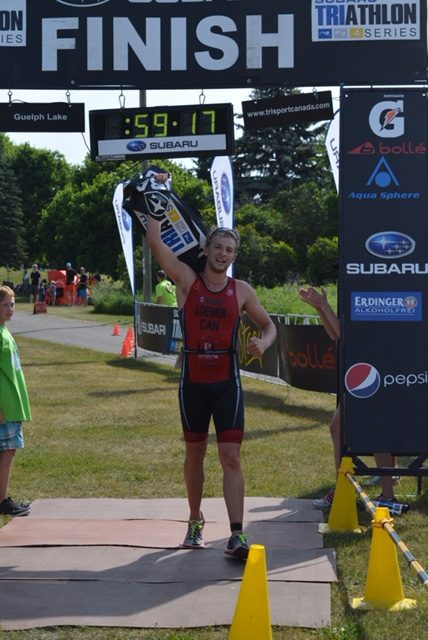 Garrick Loewen is a name we’ve been hearing on the Ontario triathlon circuit recently, and one we can expect to hear more of on the national level. The 21-year-old from LaSalle, Ontario is one of the province’s rising talents and has been wracking up some strong results in Ontario and Quebec draft-legal races for the last few years. After an age-group silver medal at the 2014 world championships, Loewen earned his pro card. Now, under the guidance of coach James Loaring and alongside some serious training partners, Loewen hopes to step his game to represent Canada at the highest level of international competition and hopefully one day, at the Olympics.

Loewen got his athletic start in hockey, but several concussions later knew it was time for a change. He found triathlon in 2010 and has been devoted to the sport ever since. After a first place finish and course record at the Subaru series Guelph Lake sprint triathlon earlier this summer, the provincial development team member told TMC he has never been more dedicated to the sport and the results are showing. He now has seven triathlon wins to his name and heads into the late summer race season feeling strong and ready for more.

“I’m spending the summer in Guelph training full-time with Team LPC as part of the Hurdle Project,” he said. “I knew it was necessary to make that commitment if I wanted to see improvement, because at home it’s a lot of solo training for me.”

The Hurdle Project is a not-for-project initiative supporting young, high-performance triathletes. The crew has some talented names including Jackson Laundry and Ryan Power and comprises a close-nit group of hardworking young athletes who aspire to race at the top level in triathlon.

“The program helps keeps costs down for racing and gives us the support we need at races,” Loewen explains. “But it goes beyond that. There’s a real team attitude and athletes work together and give each other advice. There’s a big performance gap within in, so the older athletes (like Laundry and Power) help the younger ones. My result from Guelph just goes to show how strong the team is. I had everyone out there cheering me on and they were with me all the way, through training right to the finish line.” 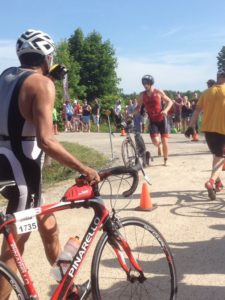 As a full-time athlete, Loewen’s summer weeks are dedicated to training and he puts in long days of more than two sessions.

“A typical day right now would be a hard five or six kilometre swim, an hour and a half run and then in the afternoon a hard bike ride. We often get the chance to go out with the Speed River Cycling Club and Regional Performance Centre crew and it’s a tough ride, an absolute hammerfest. That’s the kind of riding you need to do to perform well in draft-legal races.”

He’s hoping all the hard work pays off as we enter a new Olympic cycle after Rio and starts to gain points to race at the WTS level.

“I think my skill set may be better suited to long course racing, but I really want to see how far I can go with draft-legal,” he says. “It’s such an exciting dynamic to take part in. I really want to be in that Olympic stream as we approach the next Games.”

With such an impressive resume to his name and an undeniable passion for the sport, it looks like Loewen is on the right path. But he isn’t giving up everything for a career as an athlete.

“I’m heading into my fourth year of school studying human kinetics at the University of Windsor. Even during the school year I work part-time as a prosthetic technician,” he says. “What I’m doing still ties into triathlon, but I hope to one day get into the clinical side of things. I’d also like to coach one day. It’s important to me to keep my options open.”

Garrick thanks his sponsors for their support: