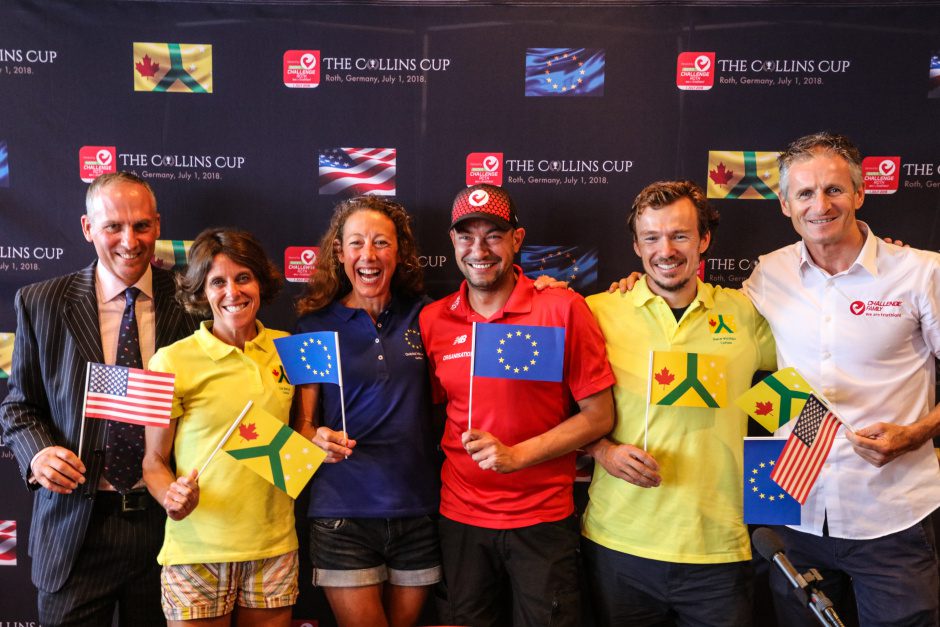 The Collins Cup has confirmed that Challenge Roth will host their inaugural event in 2018.

At the Challenge Roth press conference on the weekend, Challenge Roth CEO Felix Walschoefer and some of the the team captains, as well as German members of the Professional Triathlon Organization made the announcement.

Many suspected the first event would be in North America, but Walschoefer says the choice to host the first stop was an easy one:

“Europeans love triathlon and especially the 260,000 dedicated German fans at Roth. As Germany has been unsuccessful in its last two bids to host the Ryder Cup, we were not going to miss the opportunity to bring The Collins Cup to Germany. The whole Challenge Family team pulled out all the stops to make sure that The Collins Cup would be contested at Roth, and we are pleased to have been selected as host venue for the inaugural event. It is only fitting that our dedicated fans and supporters have the opportunity to witness what will be an iconic event for the sport for triathlon.”

Modelled after golf’s Ryder Cup, the long-distance event (3 km swim, 120 km bike and 25 km run) includes 12 athletes from three different teams – USA, Europe and International. The teams will consist of six men and women – eight will qualify automatically based on  points system based on non-drafting results. (Tri-Rating’s Thorsten Radde helped develop the points ranking system.) Athletes from each team will compete in 12 different individual races of three. The winner of each min-race will earn three points, second will earn two with third taking one. There’s an additional half-point bonus for finishing with a gap of three minutes.

Modelled after golf’s Ryder Cup, The Collins Cup is a long-distance team competition among USA, Europe and the Internationals. Each team will consist of 12 professional triathletes, six men and six women. An athlete from each team will battle against one another in an individual race of three; so there will be 12 separate race matches, each staggered 10 minutes apart.

Athletes will be awarded points for their team based on performances in their respective race match, and the team with the most overall points from the 12 race matches will claim the spoils of The Collins Cup and ‘bragging rights as the most dominant force in the sport’. The team that finishes last will receive The Broke Spoke Trophy.

Eight athletes will earn a place on their respective teams by way of the PTO World Ranking System and the remaining four athletes will be selected by each team’s captains. The team captains for The Collins Cup 2018 are:

Tim O’Donnell and Rachel Joyce, Co-Presidents of the PTO, commented, “We could not be more thrilled that the first Collins Cup will be hosted at Roth. The primary mission of the PTO is to celebrate the sport of triathlon. The Collins Cup will bring together legends in this sport to captain today’s top triathletes in a battle to see which region dominates triathlon. Not only is this going to create a riveting competition, it will also serve as a platform for professionals and fans to celebrate triathlon. We can think of no better place to start that celebration than in Roth, where the fan support is truly amazing.”