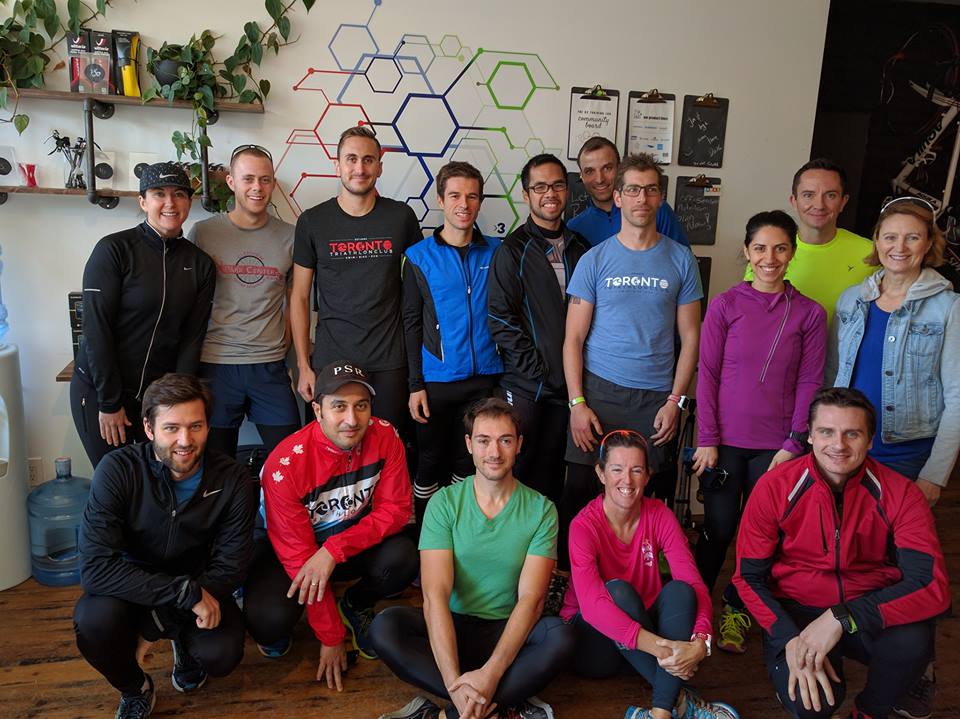 On Sunday, Triathlon Magazine Canada and X3 Training Lab co-hosted a Toronto triathlon community event with Ontario pro, Cody Beals where he held Q&A session and covered a wide range of topics in-depth from the numbers he sees in his own training to the current state of the North American triathlon racing scene. We live-streamed some of the Q&A session online — it can be watched below. We’ve also rounded up some of his answers to popular questions below. Beals, who runs one of the most-read pro race blogs in the triathlon world, is known for being extremely open and honest in sharing what life is like as a full-time, elite triathlete.

His favourite race on the circuit:

“Ironman 70.3 Muskoka is no longer a professional race, which I’m sad about, but it’s one of my favourite races on the circuit for two reasons. I’ve raced upwards of 15 different 70.3 races and that bike course is utterly humbling. There’s been a progression of dumbing races down these days, making them easier, which a lot of athletes seem to favour but Muskoka kept a challenging race. I’m crossing my fingers that it will turn back into a pro race one day.”

“There are a lot of local races I really love. Earning a living as a pro triathlete, a lot of my racing sadly has to be out of the country now because there are limited options to earn a paycheque in Canada. But I really, really cherish the local racing. Next year I really want to just get out there and race… it provides opportunities to engage with the community. Here in Ontario we have such a thriving local race scene. I’ve been to other places where you see smaller local races falling as Ironman and Challenge brand races rise up, but here in Canada we have the Multisport Canada series which is fantastic… I would really encourage you to get out there and support the local races, as I plan to next year. Don’t take them for granted because they will fizzle out over the years if we don’t support them.”

Why long course instead of ITU racing?

“It comes down to my swim. I did consider earlier on specializing in ITU racing… but the swim is extremely important, despite being a small fraction of the race. The way the packs come out of the water really determines the rest of the race and it’s critical to have a strong swim. I have a partial swimming background, but not a swim team type background that a lot of those athletes have — so I could have invested myself in two or three years of swimming focus… but it would have been a gamble. Long course racing gave me the ability to start earning an income sooner. It’s not more challenging, just different.”

“That’s a concept I don’t really use. I generally prefer to look at threshold. Roughly the power I could hold for 45 minutes.. at my peak not more than 370 watts and not less than 360 W.”

“It’s a really hard balance to strike… when to be gentle on yourself and when to push through things you hate. Ultimately, even the most [intense] triathletes are not robots. We experience burnout, too… motivation is a finite resource. It’s a renewable one, but you can definitely run out of it at some point.

As a pro, I’ve gained a huge appreciation for just how much I have to eat. We’re training 20+ hours a week, that’s an absurd amount of food. You have to be eating a ton. A lot of what I used to think was fatigue, was actually under-fuelling. You also have to periodize your diet throughout the year, properly.

I’m very data-oriented in certain aspects of my training but I’ve shied away from metrics like TSS recently [when it comes to fatigue]. Apart from looking at the details from each workout, the bigger picture view comes down to a couple simple questions: how am I feeling and am I accomplishing my plan? Those two questions tell me a lot more about how I’m doing than looking at TSS.

I’m not a big proponent of recovery tools like compression, ice baths, massage, etc. We’re purposely stressing our bodies, hoping to get a response to take ourselves to the next level. If we’re artificially helping ourselves recover from that stress, are we really adapting and accomplishing what we set out to do? It might be a better to approach to not train so hard so you don’t need that ice bath or anti-inflammatories. The one exception might be if you’re racing back-to-back weekends.

For me the bottom line is eating well, sleeping well and keeping stress to a minimum.”

“One model I’d like to see in professional racing is… [something like with ITU], which has three tiers [continental, world cup, world series]. Ironman has roughly 500 male long course pros and we’re all in the same division. I’d like to see more levels, maybe a minor league you’d have to spend time in that could feed into a ‘world series’ level with prize money to reflect that. I think that would really help foster development of elite triathletes and would be good for the sport. Right now, it’s so tricky to just jump in and make a living as a pro triathlete… many are in a Catch-22 situation because they have to work to support themselves to train, but to get up to that highest level, they have to invest a couple years of just training to get into that level.

The amount of hours he trains per week:

“Pro triathletes are terrible with that question.

Over the past few years, it’s been an average of about 18 hours a week. That means some weeks I’m training 25 hours plus, other weeks closer to zero. There’s a lot of periodization in that too.”