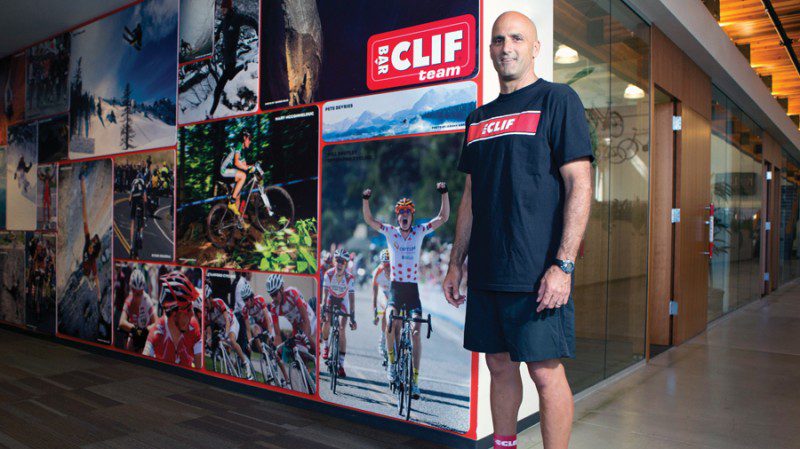 Lunchtime group runs from the office sometimes have five people heading out, other times there are 12. Two-hour bike rides with co-workers provide a way to “connect with the company.” Clif Bar CEO Kevin Cleary says he’ll often arrive at an afternoon meeting sweaty after one of those lunchtime jaunts.

Welcome to life at Clif Bar, with a CEO who is gearing up for his first go at the Ironman World Championship in Kona, Hawaii. Cleary’s goal, he feels, sets the right example for the organization he leads — he wants Clif Bar employees to embrace “being their best and leading healthy lives” He’s the coach of his eight-year-old twin sons’ baseball team and he also coaches his six-year-old son’s team, too. He encourages his employees to get out and do the same in their communities, too. You know those work environments that frown upon leading the office while it’s still light? Cleary often heads out at 4 to get to the soccer field.

That “lead by example” approach isn’t just for the people who work for him — and isn’t just about workouts, either.

“I love doing this stuff to show my kids and set a good example,” he says. “My kids see a dad who is as excited about going to work on Monday as he is heading out for his ride on Saturday.”

None of which means that Cleary doesn’t work hard. Running a company while getting ready for the world championship is no easy task, but Cleary plans and prepares every week to be able to fit everything in. For the last 17 years he’s sat down every Sunday night to organize his week so he can fit in all his workouts, along with his travel and work commitments and, of course, that important family time. That discipline got him through Ironman Canada in 1999 and Ironman Wisconsin in 2005. He’s raced numerous half-distance races since. As he gears up for Kona he’s been working with coach Matt Dixon, who has focussed his training. He’s now training with a power meter to enhance the specificity of his training, too.

“It’s a whole different take on training,” Cleary says. “He gets you the key workouts you need. Every workout has a purpose.”

Of course nutrition will be a major component to Cleary’s Kona race and he;s been testing out a number of Clif Bar products to make sure he finds the perfect mix for race day on the Big Island. One of the things he’s found is that he enjoys sweeter tasting products early, but craves a different taste towards the end of his workouts. During his race in Kona, he will “do something every 10 minutes: drink, take some BLOKS, drink, take a gel, drink, take some of our Organic Energy Food or have half a CLIF Bar.”

As he’s prepared for the race he’s also figured out his favourite products.

“I find the Margarita CLIF BLOKS with the salty flavour and higher sodium content work really well later in a workout,” he says.

Cleary hopes to go under 11 hours on the Big Island in October (He finished Ironman Canada in 11:40), but won’t be upset if he doesn’t reach that goal. No matter what his time, though, his Ironman journey has been a great trip.

With three times the sodium of other BLOKS flavours, the Margarita CLIF BLOKS are organic, easy to handle and easy to chew. They’ll also give your palate a welcome change from all the sweetness energy drinks, gels and other BLOKS you might have taken in on race day. It’s easy to keep track of your caloric intake, too — each BLOK provides 33 calories. CLIF BLOKS are made with organic brown rice syrup, a minimally refined source of carbohydrate with naturally occurring sodium, potassium and magnesium.