“Cervélo is back,” one of the journalists proclaimed a few kilometres into our test ride of Cervélo’s new P5.

“I’m not sure I’d be comfortable saying they’d ever gone anywhere,” I replied. “They still lead the Kona bike count every year. But, I will give you this – they’ve nailed this.”

“This,” of course, is the long-awaited revamp of the P5. Initially launched in 2012, a new version of the P5 has been a long-time coming, for sure. But totally worth the wait. The newest iteration of this super bike is 18 percent lighter than its predecessor, 25 percent stiffer and more aerodynamic, even with the addition of disc brakes.

But what’s possibly even more important, and impressive, about the new P5, is how it performs. This is a “biker’s bike,” one that is an immediate hit with those who enjoy a responsive, reactive ride. You get the best of all possible worlds with the P5 – a super-aero machine that allows you to ride aggressively through corners. It’s a time-trialist’s dream bike, one that will no-doubt earn some impressive results in Grand Tours and cycling world championships. And one that will also be a popular triathlon bike for performance-hungry triathletes.

For those of you who might have argued with that journalist, saying that Cervélo made a big splash with the launch of the P5X a few years ago, you have to understand that the P5 and the P5X actually have different goals in mind. The P5X is designed around all the “stuff” triathletes typically carry with them for long-distance rides. Three round water bottles, lots of gels and bars, etc. The P5X is super-aero with all that stuff, but has the downside of being heavier and, of course, isn’t UCI legal. The P5, on the other hand, starts as a UCI legal bike, albeit one that lots of triathletes will gravitate to. If you’re a triathlete, looking for a super-fast ride and you’re happy to live with a few gels or bars and a round water bottle between your handlebars, possibly another behind your saddle and an aero bottle on your downtube, then you’re likely to gravitate towards the P5. Especially if you’re a rider looking for a bike that will feel good while hammering up hills and speeding through corners. 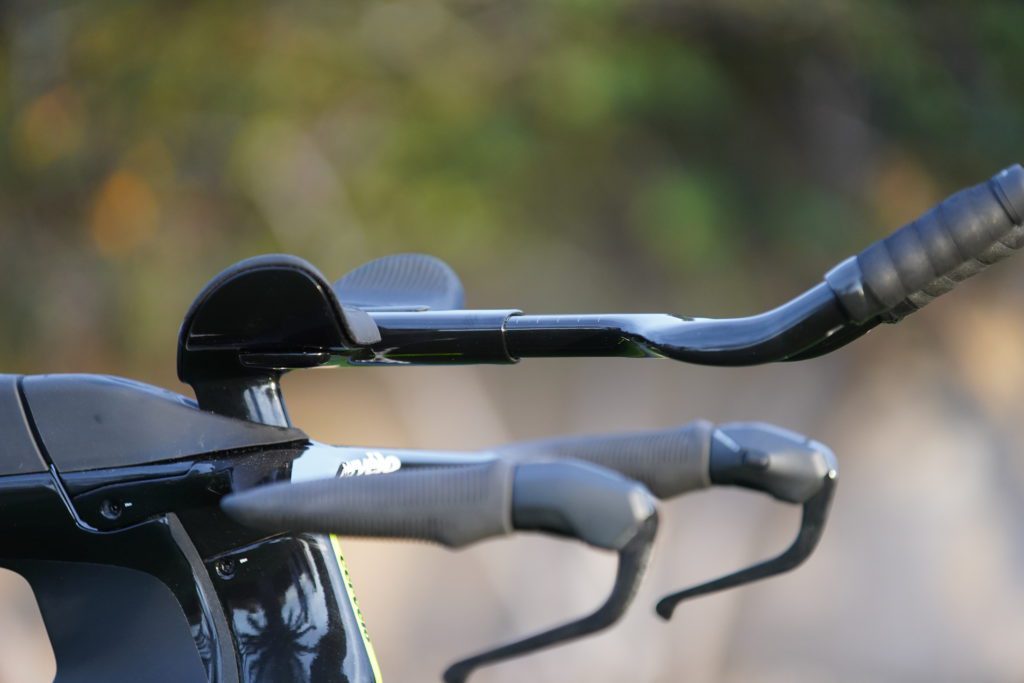 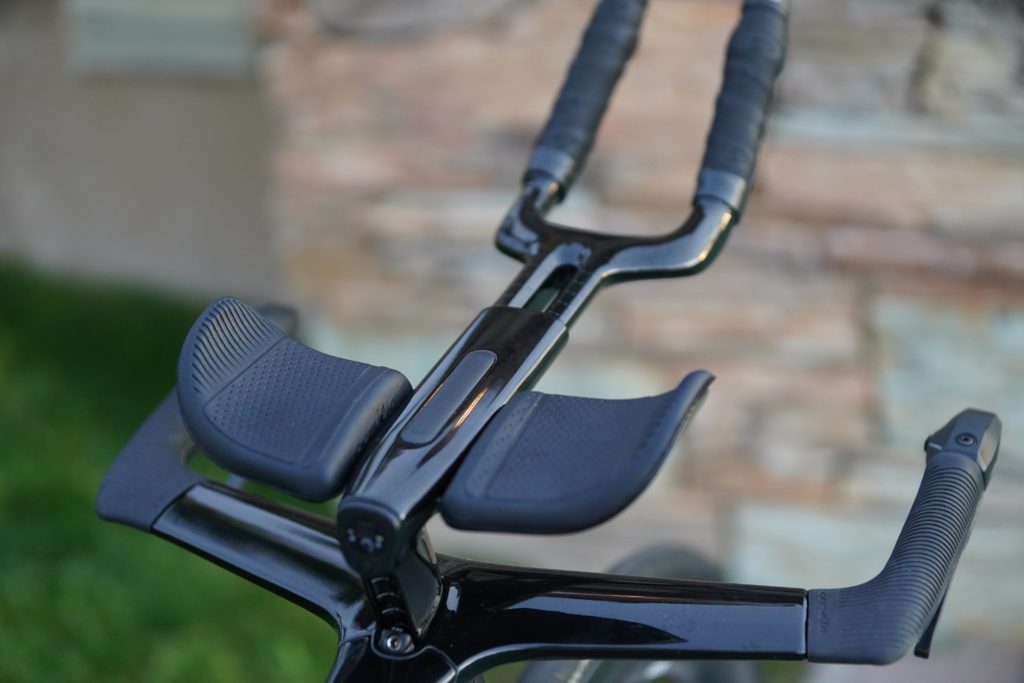 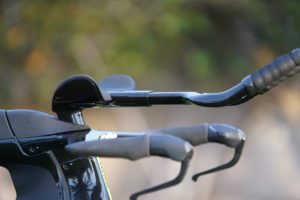 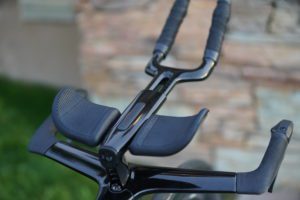 One of the most innovative features of the P5X was the super-adjustable cockpit that featured a unique riser that could be raised or lowered by loosening one screw. The new P5 builds on that feature, offering an even simpler adjustable riser. The riser attaches to a sleek, very adjustable aero bar that comes with three different extensions – 30- and 50-degree options along with an S-bend version. The newly designed base bar is 38 cm wide and features Cervélo’s own proprietary grips that are very comfortable and designed to add some aero features, while also providing excellent grip even if your hands get sweaty. Despite being just 38 cm wide, the bars feel really good when you’re climbing and hammering into corners. Cervélo has also designed their own pads for the aero bars, which are very comfortable.

While you don’t get the same diverse fitting options that are available in the P5X, there is still lots of adjustability with the P5 cockpit and, with five sizes available (48, 51, 54, 56, 58), it’s hard to imagine that there are many people who won’t get a great fit on the P5.

The bike is designed for easy implementation of Shimano’s Di2 system, with the battery stored in the seat post and the charging port easily accessed through the back of the riser. All the hidden wires only enhance the aero features of the bike. For those who might want to run 1X on the P5, the front derailleur hanger is removable.

Cervélo had to answer to a number of top-flight cyclists (Tom Dumoulin and the crew at Team Sunweb to name just a few of the World Pro Tour cyclists Cervélo works with) when it came to the design of the new bike, which inspired the engineers to spend a lot of time working on the stiffness of the frame. While you never want a bike to feel like a board underneath you, you do want it to be laterally stiff so all your energy goes into moving you forward. The engineers at Cervélo managed to make the frame stiffer exactly where you want it to be – it’s 22 percent stiffer around the head tube than the old P5, and 26 percent stiffer around the bottom bracket. What that means out on the road is you have a bike that is much more responsive when you’re climbing, or pushing hard on the pedals, and is nothing short of a dream in corners. The bike is noticeably lighter (350 g for frame and fork), too, which makes it even more fun when you have to start climbing.

As we’re seeing more and more these days, the new P5 uses disc brakes, which provide excellent braking performance even in rainy conditions. The industry is moving more and more in the disc-brake direction for that reason, but designing a disc-braked bike that is more aerodynamic offers some challenges. The Cervélo engineers have managed to overcome those challenges, though, offering a bike that provides 17 g less drag than the old P5.

Wheel clearance has become a big deal in the bike world these days, too, as rim and tire widths seem to be getting wider and wider all the time. The new P5 features a whopping 36 mm of wheel clearance, so it’s hard to imagine you’ll have any issues.

The new seat post in the P5 is lighter than the previous version (which will still fit) and comes with the same behind the saddle bottle mount seen on the P5X. There’s also a Cervélo-designed downtube water bottle that holds 500 ml of liquid and makes the bike more aerodynamic. The “triathlon version” of the P5 also comes with a pair of aero “bento” boxes that Cervélo calls Smartpacks. The Smartpack 100 up front is perfect for wrappers and hides the riser bolt, while the Smartpack 400 will hold gels or bars.

We’ll have more on the ride quality of the new P5 in our May issue of Triathlon Magazine Canada, but on our one venture out on the bike we were more than a little impressed. The new P5 is a rocket – it’s hard not to want to ride the bike fast. With every pedal stroke you make, it feels like the bike is surging forward. We got to do a bit of climbing on the new bike, too, and it is one of the best-performing TT or tri-bikes we’ve ridden when it comes to climbing and corners like a dream at high speeds through switchbacks and technical terrain.

All of which means next-to-nothing for most triathletes, who spend much of their training time on relatively flat terrain and avoid steep climbs and fast, switch-back-filled descents. Those riders will love the new P5 just as much, though – the new cockpit is extremely comfortable and draws you to an aero position. The bike is super fast in real-world conditions – a group of us journalists got to chase American pro Ben Hoffman for a long descent during our test ride and learned, the hard way, that if we were willing to hurt enough, the P5 was more than enough of a machine to keep up. (It did hurt, though, I promise.)

Suffice it to say that Cervélo has, once again, put itself at the forefront of the super-bike category with the new P5. Even if they never went anywhere, Cervélo is back at the top of their game. The new P5 was certainly worth the wait.