It’s been quite a year for Ottawa’s Leah Sherriff. She raced Ironman 70.3 Muskoka last year for fun, qualified for and raced at the Ironman 70.3 World Championship, then finished the season with a sixth place finish at the Niagara Falls Barrelman. Leah recently kicked off her 2016 campaign with a bang at Ironman 70.3 Monterrey. Her 4:38:39 clocking allowed her to win the 30-34 age group, finish as the 13th fastest woman, and earn the opportunity to race as a professional.

Leah’s adventures as a rookie pro will be documented with a bi-weekly blog right here on Triathlon Magazine Canada. Until then, learn about this athlete on the rise.

TMC: You had some great results in 2015, and competed at the Ironman 70.3 World Championships, but you certainly had a breakthrough race at Ironman 70.3 Monterrey. You clearly made some big gains all winter. Tell us about your day and all the work you put in the get there.

Leah Sherriff: I’m currently going through the Articling process to become a lawyer. This means I’m only entitled to 10 days of vacation over the course of ten months. I saved up all of my vacation time, and prior to the race I went down to train with my coach Greg Kealey and some of my teammates in Florida. I’d gotten a new Cannondale Slice this winter so the week before the race was actually the first time I got to ride it outside. The woes of living in Ottawa.

My travel to Monterrey went smoothly, as did my pre-race prep, but the morning of the race was surreal. I remember looking over and seeing Mirinda Carfrae and Heather Wurtele warming up beside me in the canal. There was some anxiety in the air because it was chilly, and threatening to rain, which everyone knew would be treacherous because of a large cobblestone section on the course. Luckily the rain held off, and from the moment the gun went off I just kept repeating to myself “race plan”. I must have said it 300 times. “Race Plan,” “Race Plan.” It kept me focused on what I was supposed to be doing in that very moment of the race. I knew I just needed to follow the plan and control what I could control. I also had “Be Aggressive” written in big black marker on my hand. I had been worried about the rolling start in the swim which, for the record, was organized chaos. It was as if 1000 golden retrievers were all of a sudden let off their leashes and someone through a giant stick in the water. I asked one of my teammates for advice and she blankly told me: “Be Aggressive” So I was. It paid off.

I tried the same thing on the run. It didn’t turn out quite so well.  I knew leaving T2 the first pro had 30 minutes on me, and the last only had 2. The standard for next year’s Elite Carding is all based on how closely you finish to the winner so I emptied everything I had left in the tank. Unfortunately, I started to loose form and pace with 7 kms to go. The end was not pretty. But then the finish line! I will never forget that finish.  As I ran up the blue carpet “God Save the Queen” was playing because Tim Don had won the men’s race.  I could see the clock and my mom jumping up and down and everything started to hit me, “I had actually done it”. I finished in just over 4:38.  It was so overwhelming that I didn’t even realize I was crying!

A lot of people thought it was ludicrous to try and Article and aim for my elite standard this year. I had only been involved in triathlon for 6 weeks when I went to Worlds. One person who never questioned me was my Coach Greg, and he is happy to remind me that his opinion is the only one that matters. I first met with him after Worlds in September and told him my goals. Greg is Ontario’s Elite Development coach. I think I surprised him because his athletes are in high school and university (I’m 31), and are focused on racing ITU. I told him what I wanted was skill development and that I believed he was the best person to teach me. Since that meeting I’ve trained 7 days a week under his watchful eye.  My performance in Monterrey is as much his doing as it is mine.

TMC: With the result, you’ve qualified for you Elite/Pro card. Was this the plan for Monterrey? Why the desire to race as a pro?

That was definitely the plan but that meant I needed to finish within 12% of the winner to qualify for Elite Status through 2017. No small feat given the stacked field that included Carfrae and Wurtele. The desire for an elite card goes beyond a want – for me it’s a need. I have always had a deep-rooted urge to constantly push myself. I want to stand on the line, race, compete against, and once I’ve earned it, beat the best. As far as I’m concerned it’s better to be the smallest and most determined shark in the ocean than the Queeniest goldfish in the fishbowl. Anything less is just selling yourself short.

Not for now. I love the law as much as I love triathlon. I’m so new to the sport and this profession that I owe it to myself to gain some experience in both before making a choice to focus on one over the other. I also think I’m really lucky to have both. As passionate as I am about the law or racing, there are always times when I kinda hate it. Having work and training to focus on when I’m in a rut with the other helps me stay positive. Plus, I need some way to support myself! This sport is crazy expensive!

TMC: You are talented athlete with a rich athletic background (volleyball, basketball, rugby, water-polo, running, and who knows what else). How did all of those sports help you for triathlon, and how did you arrive at the sport of triathlon?

In high school I played a ton of sports, and then in university I played varsity volleyball at RMC and quickly secured a spot on the military national team. I finished my volleyball career at U of T while at law school. It was through these experiences that I began to understand the mental fortitude it takes to be a high level athlete. You figure out how to learn from a coach, compete against others and yourself, how to handle defeat, and what it takes to win. After I retired from volleyball, I switched to road running and was fortunate to have Dylan Wykes as my coach for three years. He is such an inspiring athlete! It was under his tutelage that I found I am best suited as an endurance athlete.

As for triathlon, it started last June with a text conversation I had with my friend Brad 10 days before Muskoka 70.3. I was taking some time off running after racing Grandma’s Marathon, and he knew I had a bike and could swim so told me it’d be a fun way to spend a weekend. It was like he set me up on the best blind date ever– slightly awkward and downright painful at times-but I quickly fell in love with triathlon.

TMC: Your instagram bio (@leahwestsherriff) states that you are a former Tank Commander and Afghanistan vet. Tell us about that experience/military background and how it shaped who you are today.

I graduated from RMC in 2007, and then served as an armoured officer and deployed to Afghanistan as an operations officer in 2010. Time and stress management are probably the two biggest assets I developed during my ten years in the Canadian Forces. Nothing puts your mind or body through stress like preparing and then deploying to a combat zone – not even an Ironman. No one wants to blow you up in a triathlon. When Greg and I were figuring out my goals for the year he asked me if I would be ready to handle the stress of racing as a pro. I just shrugged and told him “I’ve been to war; sports isn’t stressful.” He didn’t argue with me.

TMC: What will you need to improve to excel at the pro level? What steps are you taking to get there? Will you be staying in Ottawa and training there as a base? Joining a group, coach, or have training partners to work with?

Everything! No but seriously, everything. I need to continue to focus on my swimming technique and building my endurance in the water. I also need to get faster off the bike. When I started last year the run was my strength, but when you get up there with the pros those chicks are running low 1:20’s. That has to be my focus this summer, which of course means being a stronger cyclist. I will also need to expand my nutrition plan beyond cereal and peanut butter. So yeah, everything! I’m going to continue to train in Ottawa with Bytown Storm’s High Performance team. I’ve also got a great group of cycling buddies who have promised that I can chase them around Gatineau Park, and Robyn Hardage, a very accomplished Ironman athlete, is also in Ottawa. She’s become an amazing friend and resource, and I’m sure there are a lot of long brick workouts in our future as we both prepare for the season.

TMC: What does your typical training week look like?

I train twice a day, seven days a week, three times on Saturday. As a team we swim early mornings five days a week, averaging about 4500 m per workout. We also ride, run, or do bricks as a team two evenings a week and on Saturdays.  The rest of the workouts are done on my own before or after work, or if I’m lucky I can sneak in a quick tempo run at lunch. The way I see it there are three buckets – work, training and a social life. You can have it all, but you can’t have it all at once. Work is what’s funding my training and racing so, for the time being, my social life bucket is buried in the closet gathering dust.

My first big race as an Elite will be Mont Tremblant 70.3. It ‘s essentially the home course, and it’s still several months away so I have time to continue to build fitness and get my legs ready for those hills. I’m also considering Calgary 70.3, but my major focus is on Long Course Nationals in Penticton. Winning there would give me a spot on the Elite team for the ITU Long Course World Championships which Canada is hosting in Penticton in 2017. I have no illusions, it’s a big goal, but I’m ready to do the work to get there. My club, Bytown Storm, is also hosting the standard and sprint National championships and a Continental Cup in Ottawa July 23-24 . It’s going to be an amazing event, and I’m excited to help out with the organization and support my teammates racing that weekend. 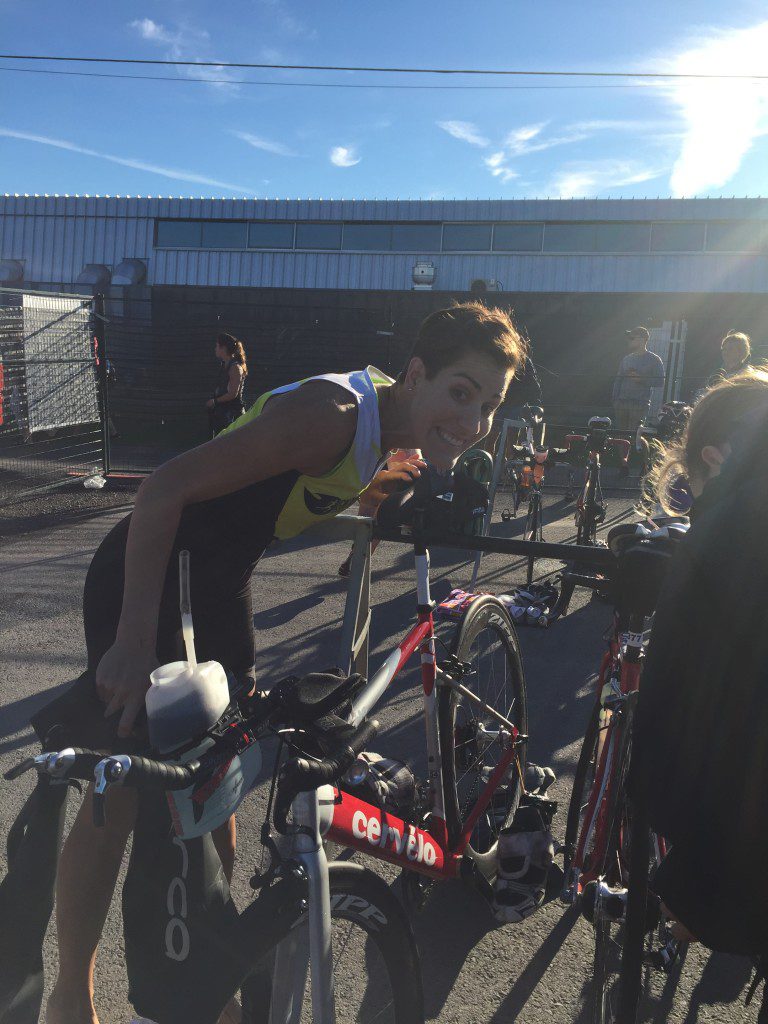