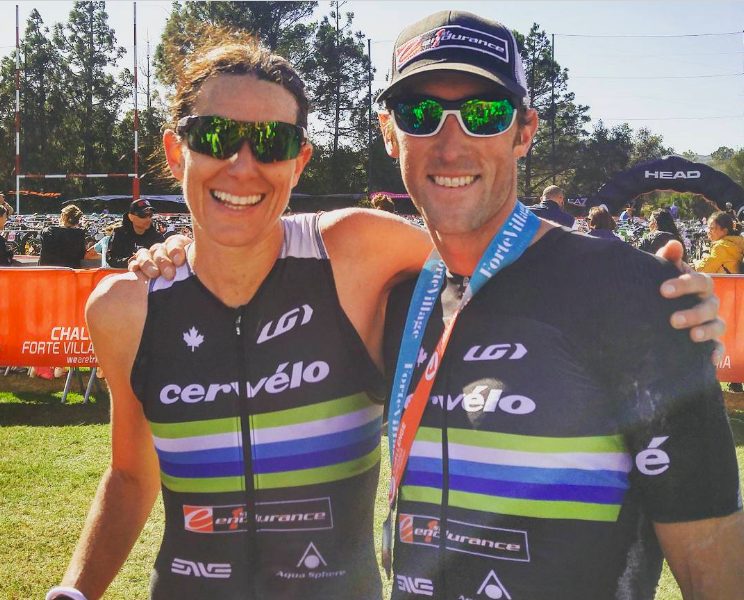 Congratulations to you both on your strong results at Challenge Sardinia. How was your experience at the race, and what did you like most about it?

Thank you. It was definitely nice to end the year on a high note with a win for Heather and really strong 5th place for Trevor.  Challenge Forte Village Sardinia is pretty amazing.  Most athletes stayed at the Forte Village resort, which made for an exceptionally easy race morning.  You really could have just put your wetsuit on in the hotel room, and walked down a flight of stairs to the swim venue.  On top of that a beautiful ocean swim, very scenic bike course along some amazingly undeveloped Mediterranean coast line, and a two loop run next to the ocean.  It was definitely a tough course, but so much fun to have some variability in the terrain and few (more than a few!) spectacular views along the way.

You’ve taken a different approach to racing this year, spending time in Europe and focusing on Challenge Family races. What draws you to the brand, and how has your experience differed from previous seasons?

At first it wasn’t so much the brand the drew us over here, it was more the races, prize money on offer, and different locations we wanted to see.  Plus, we had no interest in going to Kona this year so it made abandoning the Ironman points chase pretty easy.  Our Euro adventures started with the Challenge Championship in Samorin Slovakia which had a 150,000 Euro prize purse.  Heather was 3rd and Trevor 9th there.  Heather also wanted to race Challenge Roth, the iconic full distance race in Europe.  So when we thought of doing those two races, we figured we may as well try and score as many points as we could in order to give the 2017 European Series a chance. There was another 140,000 Euro purse on offer there, split between top 5 male/female.  In that series you can score up to 6 races, so we tried to do as many as we could.  We were both 2nd at Challenge Heilbronn Germany, Trevor won Challenge Geraardsbergen Belgium, another second for both of us at Challenge Iceland.  Then the two wins for Heather in these last two races of the year, Mallorca and Sardinia, which put her in 4th overall.  Trevor needed a 3rd place in Sardinia to get a top 5 overall, but missed out on that by about 50 seconds.  Ultimately to win the overall you really needed to complete a full distance Challenge race – which neither of us did.

What was the catalyst to try out these new races?

We both felt we were just getting stuck in the same routine year after year.  The same races, the same Kona points chase, the same athletes.  We needed a change.  Best decision of the year for sure. We really enjoyed racing in Europe and seeing some new places!

What has been the highlight of your seasons this year?

It would be tough to pick one moment.  I’d say the year as a whole was very enjoyable and we really had some of the most fun we’ve ever had racing triathlon. Dynamic ‘Euro style’, technical bike courses kept us smiling, and we very much enjoyed training Banyoles, Spain.

Will you guys go after Kona qualification again?

Yes. We’re not done with Kona. We were very happy not to be there this year, but it’s the race that gets the most attention and therefore the most prestigious.  You have to WANT to do it in order to do it well, and we weren’t in that mind frame this year.

What are the races, or results, that you are still chasing in your careers?

Heather has had a good result with 8th place in Kona, but several finishes just outside the top 10, so getting another top 10 or top 5 there is always on the list.  Trevor has never had a ‘complete’ day in Kona so there’s still that in the back of the mind.

At this point, for 2018, Heather wants to win Ironman 70.3 St. George North American Championship, and the Challenge Championship in Slovakia.  She was leading into the final mile this year when the lead changed three times between her, Lucy Charles, and Annabel Luxford.  From a spectator standpoint it was a crazy finish with a lot of prize money on the line.  Going back there and getting the win is high on the list for her.

We’d also both like to win another full distance Ironman or two.  There are certain courses that definitely appeal to us more than others.  Something like New Zealand, Lake Placid, Tremblant, Nice France, Switzerland, or Whistler.  If Whistler had both a male and female pro race the same year, we’d go for sure.

Are you finished racing now for 2017 – if so, how will you spend your off season?

Yes, we’re all done for the year now.  We’re looking forward to some cross country skiing in November (apparently one of the local nordic areas is semi-open already), plus a lot of family time and extremely short swims followed by long hot-tub sessions.