Bob Knuckey raced his first triathlon – an Ironman – at the age of 60. In the decade since, he’s wasted no time making his mark in the sport. Knuckey has claimed two 70.3 world championships and, last fall, he won the Ironman 70 to 74 age group at the Ironman World Championship and broke the 12-hour barrier.

His coach, Barrie Shepley, says Knuckey is a legend. “In 35 years of coaching, Bob would be in the top one per cent of all the athletes I have ever worked with, including Olympic pros and Ironman champs,” says Shepley. “If Bob was 45 years younger, doing the work he did for Kona 2018, he would be joining Tyler Mislawchuk on the Tokyo 2020 Olympic Team.”

Knuckey didn’t swim until he was in his fifties, but began running at the age of 15 and never stopped. He loves running so much that in 2003, he retired early from a teaching career to spend more time training. “I like teaching, but I like training better,” he says. Knuckey raced marathons and duathlons before that first Ironman in Wisconsin in 2007. He had been treated for prostate cancer just two months before and didn’t intend to complete the course, but did so in 13 and a half hours. “I saw the medals before the race started and decided that I wanted one of those,” he says. He planned to alternate running with walking, but it was too slow and he didn’t like getting passed by a 70-year-old.

According to Shepley, who runs the Canadian Cross Training Club (C3) in Caledon, Ont., being passed is a bit of an issue with Knuckey. “Bob really only had one major flaw we were concerned about going into Kona: his self-discipline,” he explains. “Bob is a racer and when he sees another near him, he doesn’t want to let them get past.”

To win Kona in 2018 and break 12 hours, there was a five-year plan with a final 12 months of very specific training. “We spent much of the last six months focusing on pacing, so Bob could eat and not overextend himself,” explains Shepley. “We had a very basic mantra: 155 watts on the bike and six-minute kilometre on the run. No faster, all day, and he would be the world champion.”

Leading up to the race, there were two weeks of training in the heat of Arizona with 200-kilometre cycling sessions and 30-kilometre runs. While there, a massage therapist saw Knuckey four times and commented that his muscles seem to be getting better with age. Knuckey’s regimen includes strength training, yoga and physiotherapy to keep him in prime shape.

Knuckey arrived in Kona with a large support group. On the big day, he came out of the water in third place and his bike time was 5:53, a full eight minutes faster than his last Kona race in 2014. However, he began to tire in the run, and it didn’t help when a long-time competitor appeared, first 13 minutes behind him and then down to 12 minutes. Knuckey realized that his pace slowed every time he ate or drank, so he decided to stop eating. 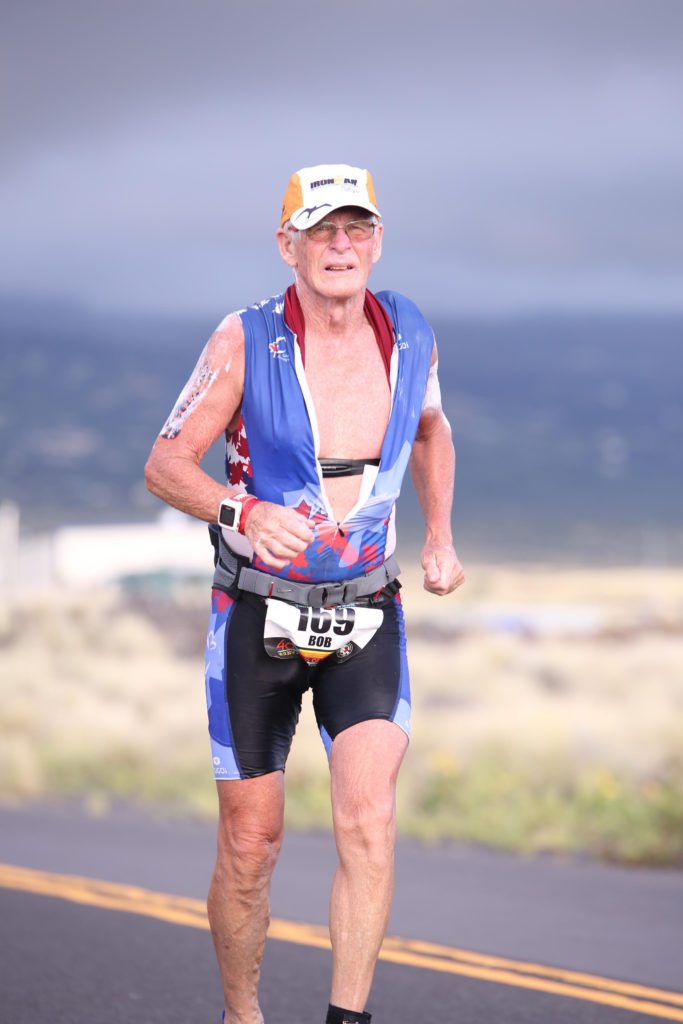 About a quarter mile from the finish line, Knuckey’s body was exhausted and he started to lean. With 400 metres to go, Knuckey tumbled to the ground and he began bleeding where his glasses cut his forehead. But once he found the glasses, he was up and off again. Knuckey credits his weekly yoga sessions for the quick recovery. “After I finished my downward dog, I was ready to go,” he quips.

After walking for 15 metres, Knuckey somehow found the energy to run across the finish line to wild applause. Watching the finish left his support group concerned about his state but they were relieved when he immediately jabbed at his watch to stop the timer at 11:55:03. It was an amazing race with a heart-stopping finish, but, as Knuckey says, “My group said they wanted epic, so I gave them epic!”

After getting four stitches and fluids at the medical tent, Knuckey realized that an important person was missing. Strangers until that day, Jose Leal had run alongside Knuckey for about the last eight kilometres and provided key support for the win. Leal was soon tracked down to celebrate with the group and, later, was flown to Canada with his wife as special guests for C3’s annual year-end club party.

Knuckey will travel to Italy this year and race a standard-distance event and, in 2020, out in Edmonton, he hopes to score a standard-distance world championship to add to his collection. That year he will also return to his running roots at the Master Games in Toronto where, in 1985, when the games first took place there, Knuckey proudly scored a second and two fourths.

Knuckey’s running career has been quite a bit longer than his teaching career of 31 years, and he shows no sign of stopping or being passed. “I will keep going as long as I can,” he says. “I like to try to inspire people and I’m very lucky that my body lets me do this.”