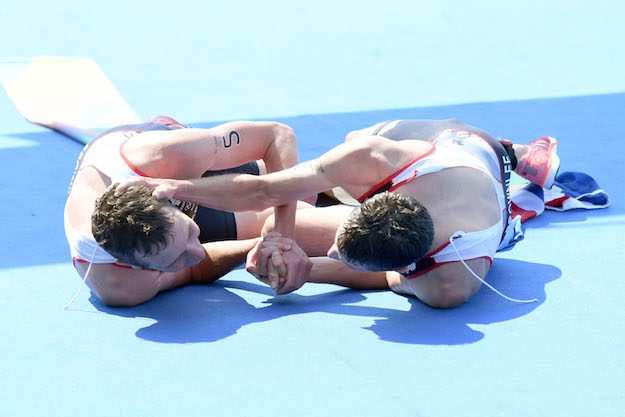 Two-time Olympic medallists Alistair and Jonathan Brownlee, who are widely renowned as some of the best male triathletes to ever compete in the sport, shared the secrets to their success in a live-streamed Facebook Q&A session last night. We rounded up some of their top answers to popular questions they receive.

JB: There’s two ways. There’s the artificial way includes heat chambers and sauna work, and there’s the second way which is actually going somewhere hot. We’ve done both, but for Rio… we spent a lot of time in the saunas. We would put lots of warm clothes on and when the body temperature was already high, go in and do a hard 30 minute session in the sauna. That actually worked really well.

AB: With Rio, when we sat down a year out and looked at the fact that it was going to be hot, that became a top priority right away.

What their hardest sessions three months out from Rio looked like:

AB: Every day in our training week is a bit different. The hardest weeks.. It all adds up to about 35 hours of training; between 20 and 25km of swimming, between 500 and 700 km of bike riding and up to about 120 km, maybe a bit more, of running. Wednesdays are a long aerobic day compared to Tuesdays and Thursdays based around tough specific sessions. We train seven days a week and get regular massage and physio to look after the body. Almost day in day out we work with different coaches, specialists, etc.

On a potential move to more running as a racing focus:

AB: Possibly, obviously the Olympics was the big deal but over the next two years we have the opportunity to try new things and I’d like to tackle some more running, maybe a marathon and some cross-country.

Tips for getting motivated when you don’t want to train:

AB: Having a goal, such as a race coming up, that gets you our the door. Meeting people to do it forces you to be there if you’re accountable to them. Training with good people, we’re lucky to have great people to train with and that social aspect is really important.

Future goals in the sport including Tokyo 2020:

JB: I’d love to win there in Tokyo. My preparation has already started. Hopefully I’ll be there for one last attempt at a medal.

AB: I think I want to be in Tokyo, and if I go I’ll be going to try to win. There’s four years though and I’d like to try some different things like long distance triathlon before I really focus on Tokyo.

The full live-stream can be watched below.