Around 45 age-groupers who competed over the weekend at Mooloolaba’s Ironman 70.3 World Championship have been forced to accept a DNF after bike course confusion caused them to ride off course in the championship race.

Though the bike course was entirely closed off to traffic during the event, some athletes claimed that directions from bike course staff were unclear and that signs had blown over and remained down and unreadable for the rest of the race

“Yes I could have ridden the course before hand, or driven it, but that involves another day off work, more accommodation,” says competitor Campbell Hanson to Slowtwitch. “I’d watched the online course video and looked at the maps several times.” 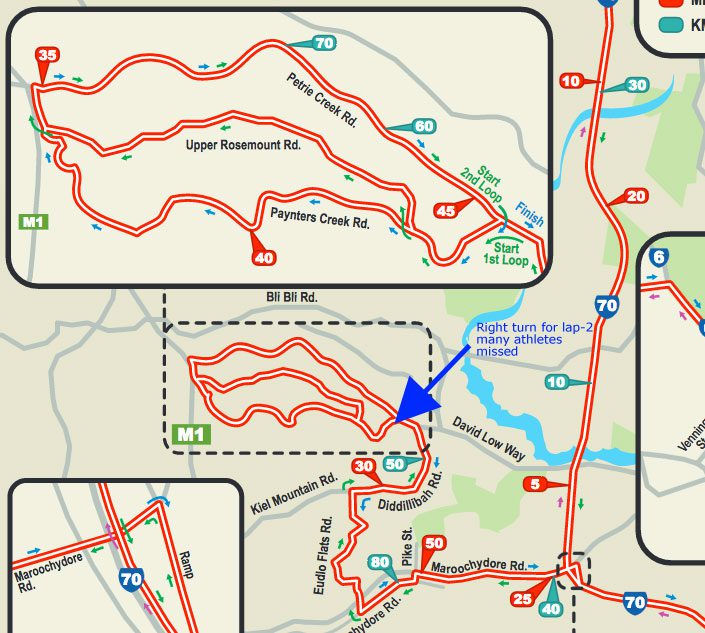 The oddly-shaped course had two loops that caused confusion on race day (seen in the map above). Several athletes accidentally rode one of the loops twice instead of riding the bike loop and small loop each once, as was prescribed in the course map. This either set them back about 12 km, meaning they only rode 78 km of the 90 km course or meant they rode more than required and still resulted in a penalty, like in the case of Hanson.

According to Slowtwitch’s report, “The list of those given DNFs show that many are seasoned veterans of 70.3 Worlds, having traveled to prior championships, bolstering the view that these competitors intended to complete the prescribed course.” Still, upwards of 45 athletes were ultimately given DNFs.