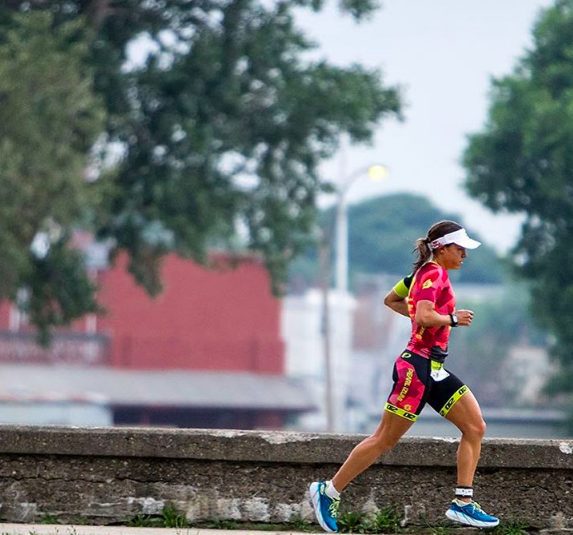 There have been a few times in the last eight years that I thought about hanging it all up. Maybe not in the respect that I really wanted to quit, but I definitely doubting whether I could really do it.

The first time came when I started the sport and had no money. I went back home to Canada and lived with my parents – at the ripe age of 27. I worked full-time to make some money and bulk up my savings so I could take a stab at trying to professionally race. But when you’re 27 and living at home with your parents, it makes you doubt yourself.

The next time I wanted to walk away was last year. I was going through a divorce, and my entire life felt turned upside down. My now ex-husband and I separated when I had just gotten out of the hospital from a surgery infection. I had a PICC line sending antibiotics straight through my veins and into my heart, and was in the worst health condition possible. Then my relationship went up in the air. When you don’t have your health, you feel so alone, and you’re trying to figure out your next steps – you just really feel stuck. So I doubted going forward with racing, and in life. I lost my sense of self when I was going through this. At the same time, I gave up my house and just headed to Boulder, CO, hoping I’d find a renewed sense of self.

And then there’s the injury factor. Over the last 18 months, I battled a broken metatarsal that was misdiagnosed, then healed, and then broke again. I was so grateful to race a few times last year, but then I got hit again with the same break as I was running out of the swim in bare feet. I had surgery in December, and when I started to run again in March, I felt pain just six weeks later. At that time I was really trying to keep things together and had faith that I would heal. It was a long battle, though, and I underwent three foot surgeries in just 14 months.

The one thing that kept me from quitting each of those times was the support team around me. When I had no money, my parents gave me six months to live with them while I saved money. Not only did they let me live with them (for free) and let me use one of their cars, I got some great dinners along the way! When I was going through my divorce, my coach, family, and my manager really helped me stay the course and keep the faith. Plus, my sponsors – including Polar, Pearl Izumi, Shimano, Red Bull, Roka, Ashworth Awards, Xlab, and Scott Bikes – helped me stay active on the sidelines while supporting the triathlon community.

I’ve also learned a lot about overcoming fear. I had the opportunity to go to a few different Red Bull camps, one of which was during the difficult time of trying to figure out my relationship. By the end of that camp, I was a different person. I saw who I was, what I stood for, and what I wanted in my life. I realized that the relationship I was in was not for me. The difficult decision of looking at divorce and giving up wasn’t even in my head anymore.

Ultimately, racing has been the one place where I feel I put 100 percent of myself in, and reflecting on this, there’s no question when it comes to quitting. I’m a triathlete, and part of that is the relentless pursuit of perfection.

So my advice, if you’re going through anything similar, is to find your fear and run toward it. Reach out to people around you. Get involved in other ways. Focus on doing, whatever that means for you. It’s the action that comes from faith and focus that is real. And have faith, because it’s the backbone of where your focus is. Ask yourself why you’re doing this. Start with that, and action will come. Never squash a dream. Your inner voice is what matters, and if you have drive and passion for something in life, you need to go for it.