In just four years since his first ever triathlon, Daniel Clarke earned himself a first place at the recent Montreal Demi Esprit half distance race. His 28:40 swim, 2:05:32 bike and 1:23 run nearly brought him below the impressive four-hour standard — he finished in 4:00:55.  What started as a way challenge to himself to stay fit has turned him into world class contender. What’s even more impressive is he hasn’t always been a talented athlete — he came in dead last in his age group in his race, Toronto Triathlon Festival.

TMC: How did you get your start in triathlon?

Daniel Clarke: The first Olympics I really watched was Sydney in 2000.  I remember seeing the triathlon on TV, watching Simon Whitfield come out of nowhere and win a gold medal. I decided I wanted to do that one day. After I graduated university in 2011 I began working an office job, and I found I wasn’t making time to be active. I decided I needed to take on a big challenge that would force me into finding time to stay fit, so I signed up for a marathon and a triathlon.

Tell us about your first triathlon

I was really excited about TTF because Simon Whitfield was one of the ambassadors for the race that year. I didn’t really have any sort of training plan to get ready for it, I swam a couple times, biked a bit, and ran a few times before the race.  I figured I was young so I could handle it. I started in the first wave, so in the swim I was passed from people multiple waves back.  It was okay, I wasn’t a swimmer, i figured I’d make it up later. Out onto the bike I was ready to go screaming past everyone, but it seemed like I was going in reverse. I remember at that point thinking this was stupid. I had already signed up for Ironman 70.3 Muskoka later that summer and I wondered if I could get a refund.

You’ve had the same bike since you started racing and despite moving up in distance and intensity in the sport, you don’t want upgrade. Why is that? 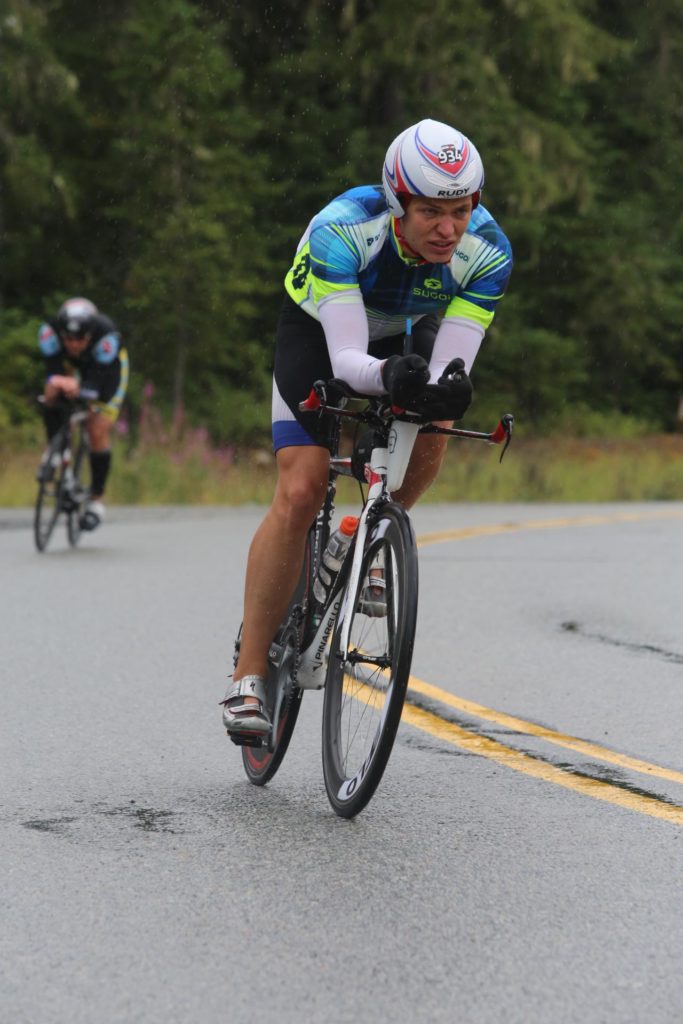 I ride a 2008 Pinarello FT1.  I bought it used before my first race in 2012, and it’s been the only bike I’ve ever raced. It’s getting a little long in the tooth, but she’s still fast. She started to show her age this year when I had a complete overhaul done. The steel tube that runs the front derailleur cable collapsed when the cable was removed, so I’m not able to run a front derailleur anymore.

You regularly clock the fastest overall age-group bike split, this is with no front derailleur?

Yes. I’ve made a lot of upgrades to my bike by scouring Kijiji and used classifieds. I don’t think there’s a single new part of my bike. But by making some wise equipment choices I think I’ve been able to close the gap between my bike and some of the newer “super bikes.”  I try to keep the front end clean, I run a disc cover in the rear, and have worked on getting down into a low position.

You won Montreal Demi-Esprit a few weeks ago. How did that feel?

It was a mix of emotions.  I was happy, disappointed, and glad to be finished.  I was pushing really hard to try to come in under 4-hours, but I just couldn’t hold onto the pace I needed for the final 4k.  So there was some disappointment there.  And since I was really pushing it I was really hurting, so finishing meant I got to stop!  But once I was across the line and had a minute to compose myself I was really happy.  When I started in 2012 I never imagined I’d be in this position, I never imagined breaking the tape as a race winner, so the disappointment I’d been feeling about not sneaking under 4:00 quickly washed away!

You’re racing Ironman Maryland this weekend to cap off a great year. What are your expectations at that race?

My big goal for Maryland is to break nine hours. I’ll need to make improvements across all three disciplines to make it happen. Additionally, If I’m in contention I’ll race to try to win. Maryland is an age-group only race. You never know who will show up, but breaking nine hours should put me in the hunt. In the back half of the run if I’m in contention my plan is to lay it all on the line, and risk blowing up for the chance to win.

You can follow Daniel’s progress and updates through his training blog https://ifnotyouthenwho.ca