With so much of the world dealing with social isolation orders, many have turned to indoor cycling platforms as a way to stay fit. Some tips for triathletes to get the most out of an online cycling platform. 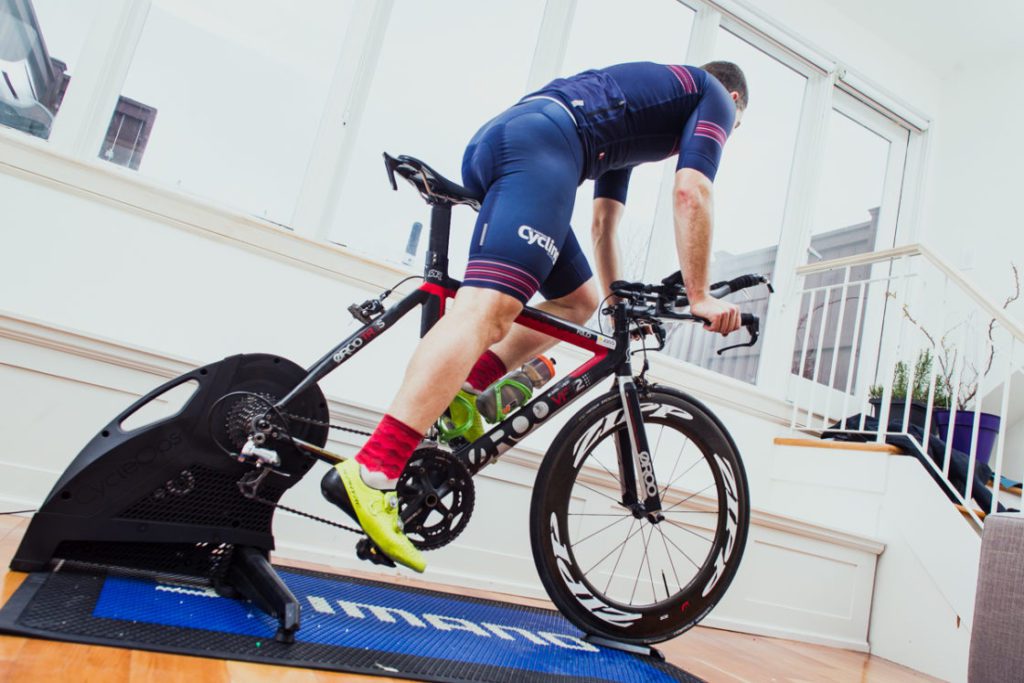 “I’m part of the Betty Designs team which is a worldwide triathlon team,” New Zealand’s Nadine Voice told ZwiftInsider.com. “A number of the girls have had races cancelled and/or are now working from home. We’ve been organising meet-ups so that we can get together while getting some exercise, all without leaving home. I’ve become an expert on time zones and Zwift meet-ups in the last couple of days. It’s super fun to do and is a great way to have some kind of social life without physically being around people.”

Using Zwift Companion you can organize and lead a group event or invite another active follower for a meetup.

For more information on how to use the Zwift Companion App, which is available for both Android and iOS, click here.

Staying cool while you’re working hard on an indoor trainer is both difficult and a necessity. One of the world’s top-ranked Zwift racers, Holden Comeau, finds that fans aren’t enough for him when he’s racing.

“Fans won’t cut it,” the 42-year-old former triathlete told VeloNews last week. “You need industrial blowers. Two of them. I also have a portable AC unit and a dehumidifier. I wear cycling glasses with clear lenses sometimes in the summer when the fans are going full blast because my eyes dry out otherwise. But I’ve experienced the effects of chronic over-heating before. Performance suffers on a day-to-day basis, and eventually you need to take a break and start over.”

Comeau, of course, is competing at a very competitive level – start with a fan and then add more cooling power as you find you need it.

Related: How to set up Zwift – the most cost effective way

Warm up for races

Whether you’re trying to nail a fast split in an Ironman VR event or competing in an online cycling race, you want to be warmed up before you start your event. For a time trial race, do the warm up in a separate session so you can start your “race” session at a decent effort level.

For indoor races it’s important to realize just how hard the athletes will be going at the start of the race. And things won’t really ease off a whole lot, either.

“Expect to be riding near threshold for the entire event… except when you have to go harder!” says ZwiftInsider’s Eric Schlange.

Know the course, pick the right one (… and pace)

If you’re competing against other cyclists in a race you’ll want to do your homework before race day so you know what’s coming at you. Most Zwift races are relatively short, so pre-riding a loop a few days before the race will help.

In a competitive group race, you’ll want to take advantage of drafting – remember, though, that it’s not going to feel like it does outside. While you can save up to 30 per cent of your effort in the draft, you won’t really feel that, so you need to pay attention to where you are in the pack.

If you’re taking part in an Ironman VR race and trying to move up the rankings, you’ll want to nail a fast time on a flat course. As with any time trial, you’ll want to make sure you keep your effort under control. The closer you are to an even pace throughout the entire effort, the faster you’ll be.

You don’t HAVE to use Zwift

Zwift is certainly the king of the indoor cycling VR hill right now, and for good reason. The platform is easy to use and has become a mainstay for triathletes and cyclists alike. That said, Ironman just signed a deal with Rouvy making it the official Ironman virtual training partner. Many triathletes and cyclists have become avid TrainerRoad users, enjoying the program’s “science-based planning, training and analysis tools.”

Keep it all in perspective

Is your goal to be a top indoor rider, or just a fit triathlete? During the coronavirus COVID-19 pandemic your first goal should be to stay healthy. Maintaining fitness so that you can return to regular training (and racing) once we are able is next on the list. Sure, it’s fun to compete, but remember that if we do get to race at all in 2020, it’s likely to come later in the year – you don’t want to burn out by pushing too hard, too soon.