So where did the sport really begin? Did teenagers really compete at the Ironman World Championship? Yes, we knew you were dying to find out …

The first triathlon wasn’t in Hawaii …

Yes, we all like to reminisce about how our sport started as a debate in a bar at an awards ceremony that would eventually become the Ironman World Championship in 1978, but before Commander John Collins and his wife Judy created that event, they were part of what is now seen as the first triathlon held four years earlier. (There were also swim, bike and run events held back in the 1920s in France, but that’s a whole different story and they certainly weren’t called triathlons!)

Held in Mission Bay, San Diego, California on Sept. 25, 1974, what’s considered the first triathlon was organized by a couple of members of the San Diego Track Club, Jack Johnstone and Don Shanahan. The race started on Fiesta Island with a three mile (4.8 km) run followed by a five mile (8 km) bike. The competitors then swam from Fiesta Iasland back to the mainland, where they did a barefoot run on the beach, another swim back to the entrance to Fiesta Island. There were 46 participants in the race, including the couple who would create what we now know as the Ironman. You can read more about John and Judy Collins and the origins of the sport here.

You can qualify for Boston in Kona

When former Chicago Marathon race director Tom Cooney started working at the Ironman World Championship in the early 2000s, he organized to get the marathon course certified, and it appears that organizers have continued that process over the years. As Bob Babbitt points out in this post after the 2019 worlds in Kona:

Yep, the Ironman World Championship marathon course is a certified Boston Marathon Qualifier, and on October 12th in Kona, there were 170 Ironman World Championship finishers who ran qualifying times for the Boston Marathon in 2021. Which means they are the chosen few who, after someone tells them they qualified for Boston in Chicago or New York and then asks one of our very special 170 where they qualified, they have earned the right to say the following:

“Me? I qualified in Kona…..after I swam 2.4 miles in the ocean, and biked 112 miles in the heat and wind and hills of the lava fields, I ran 26.2 miles in a blast furnace in the heat of the day on the Big Island of Hawaii to get my Boston spot.”

Nowadays you can’t enter an Ironman event unless you are 18, but in 1982 there was no such age restriction. That year 14-year-old Rodkey Faust became the youngest finisher of the worlds, completing the race in 13:36:17.

While American Brad Kearns won the prestigious Desert Princess Duathlon using a set of the Scott DH bars that would revolutionize the sport, it was Canada’s Andrew MacNaughton who would be the first to win a triathlon race using the bars in 1987. MacNaughton beat Mike Pigg at the Crawfishman Triathlon in Louisiana, the first of seven-straight races he would win that year on the bars. After the Crawfishman race, Pigg asked MacNaughton where he got the bars, got himself a pair, then went on his own run of seven-straight wins. We caught up with MacNaughton a few years ago.

Drafting was introduced to help get triathlon into the Olympics 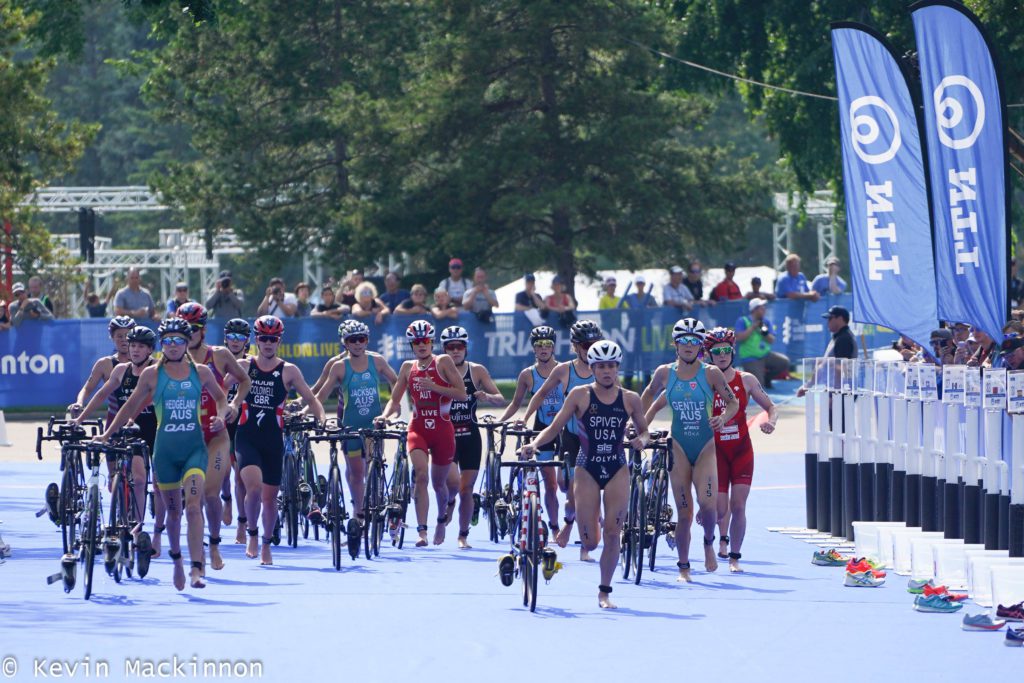 In order to make the sport more appealing to the International Olympic Committee, the International Triathlon Union (what is now known as World Triathlon) decided to introduce draft-legal racing. There’s always been some debate on whether the main reasoning was around officiating or the fact that a strung-out line of riders wasn’t as exciting to watch. As the swim level of the athletes has improved over the years, it now seems imposisible to imagine trying to separate out the large packs of swimmers that hit T1 in a hurry. During the early and mid-90s, though, when the new draft-legal race format was introduced, it was certainly controversial.