In the end it wasn’t even close – as predicted, sitting behind a group of cyclists made all the difference at the Sub7/ Sub8 Project as all four athletes involved were well under the marks.

While the times won’t ever be ratified as world bests, there were some interesting things we saw and learned from today’s epic day of racing.

We reported earlier this week about Kristian Blummenfelt’s prototype Cadex bike that he used for the race this weekend. The bike was developed with the Sub7 goal in mind, but Blummenfelt used it to take the Ironman World Championship in St. George last month, too. During the race we also learned from Alistair Brownlee that Skipper’s team was using a new rear water bottle set up that was literally built through 3D printing this week after testing on the track. Blummenfelt was also swimming in yet another different looking Deboer wetsuit. The company developed the latest version of the Floh 2.0 to help its athletes in St. George, and no-doubt worked on something special for the Norwegian for this race, too. Blummenfelt was also running in the new Asics Metaspeed shoes (we’re guessing, based on his running style, the Sky+). We wrote about the new shoes when they were launched in April.

Matthews was also running in Metaspeed shoes – we’re not sure if she was in the latest version or not.

Bike for show, run for dough

The long-used adage was true once again today as Skipper’s team flew through the ride at an amazing 55 kph, coming off the bike in 3:16:42 compared to Blummenfelt’s 3:24:22. In the end, though, Skipper had lost over five minutes in the water, then would end up running just under six minutes slower. Blummenfelt’s 2:30:50 marathon was more than enough to pull him clear of the Brit and help him become the first person under the seven hour barrier.

In the women’s race, Kat Matthews might have run a minute slower than Nicola Spirig (2:46:09 compared to 2:45:07), but Spirig was unable to hold on through the last 12 km of the run, the critical part of any marathon. Matthews got stronger through the marathon leg, which is why she was able to take the day and annihilate the eight-hour barrier.

Kat Matthews is the real deal, but so is Nicola Spirig

It feels like we’ve been saying that a lot of late, but its because she continues to impress every time she races. In March, when she took Ironman 70.3 Lanzarote in dominating fashion over then defending Ironman world champion Anne Haug, it seemed clear that the relatively new pro was on her way to greatness. A phenomenal runner-up finish in her first Ironman World Championship appearance confirmed that, as did today’s impressive effort.

Nicola Spirig is apparently retiring after today’s event, rounding out an incredible career that saw her win Olympic gold and silver, along with a raft of other big half-distance wins, not to mention a win in her only Ironman race – Cozumel in 2014. Spirig broke her collar bone and punctured her lungs in a bike crash in February, but still managed to come back and come oh-so-close to taking the win today while also smashing the eight-hour barrier. If she is calling it quits after this race, she ends her career as arguably one of the best the sport has ever seen. 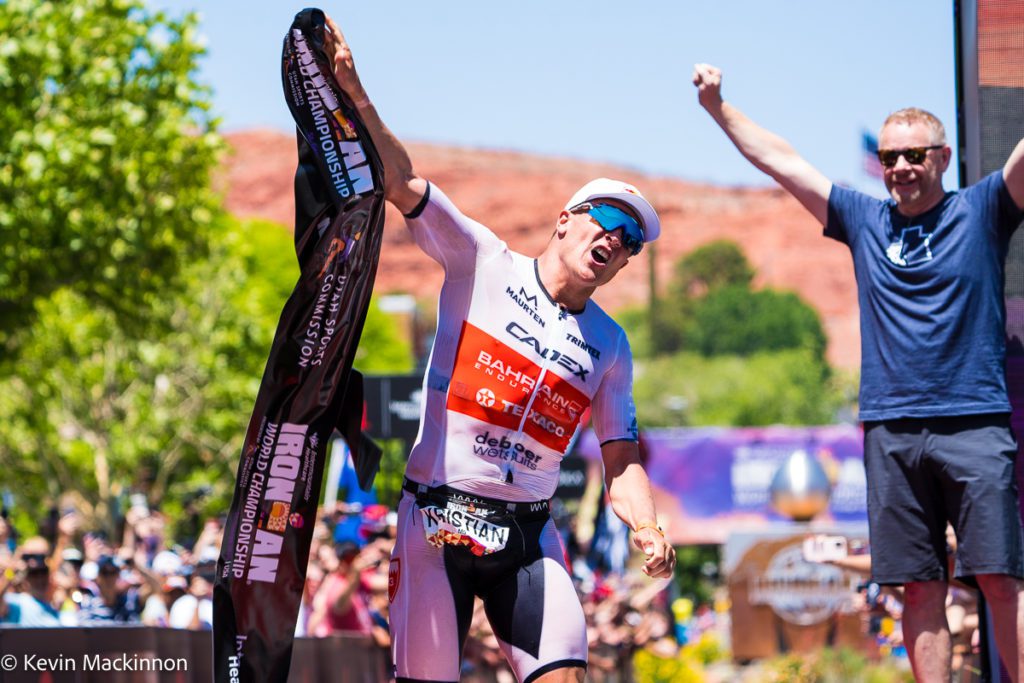 Not that we didn’t exactly know that, but its hard to believe that this is a guy who was winning sprint and Olympic distance races less than a year ago. There doesn’t appear to be a distance that Blummenfelt wouldn’t be competitive in these days. It’s hard to believe that he won the Triathlon World title last August in Edmonton in a sprint finish, then a few months later blasted to a 7:21 Ironman win in Cozumel. (Granted, with a down-current swim.) Today’s performance won’t be any sort of a record, but proves once again that Blummenfelt is truly the man to beat in the sport right now, regardless of the distance.

While the time advantages were obviously huge, Kristian Blummenfelt’s day almost came to an abrupt end when one of the riders in front of him came close to crashing. Riding at the speeds they were going, the athletes had to stay incredibly focussed to maintain their position both on their aero bars, but also close enough to the wheel ahead to get the most benefit of the draft from the athletes ahead.

The benefit of the draft, though, meant that the athletes were pushing roughly 40 watts less than they would have if they were riding alone.