One of the last major full distance races of the 2017 calendar, Ironman Arizona, takes place on Sunday Nov 19. This will be one of the last times we see some of our favourite pros race for a few months as they approach the off-season, and fortunately, there’s a lot of talent on the pro start lines and interesting stories to follow during the race. Here’s what we’ll be watching for on Sunday:

Does Helle Fredriksen have what it takes to master Ironman?

This will be the Danish triathlete’s first Ironman. She is an all-around fantastic triathlete — an Olympian, an 8-time 70.3 champ and the fastest woman ever across the half distance. She’s also started working her way towards long course success with a 2nd place this summer at the ITU Multisport World Championships in Penticton. Will Fredriksen see as much success in this new phase of her career? We’ve certainly pegged her as a favourite in the women’s race and could see her going sub-9 hour on the fast and flat IMAZ course:

Running my way into IRONMAN race week. I have zero idea what to expect. But I’m going to give it a shot. I feel strong, think I’ve done an OK amount of work and I’m ready to jump in at the deep end to learn. #IMArizona #Rookie

This has been a huge year for Penticton’s Jen Annett. She earned a handful of second place finishes including at Ironman Canada in July. Annett is due for a win soon, and we think this could be the race for it — if so, it would also set her up well for her Kona points chase.

Will Lionel Sanders successfully defend, and better yet, reclaim his Ironman World Record?

This the most anticipated storyline of Sunday’s race. He’s pretty fresh off his incredible second place finish at the Ironman World Championship, but we’ve also seen from Zwift he has been putting in some pretty intense race-pace sessions which would indicate he’s feeling good and ready to go hard again:

Sanders’ world record for an Ironman branded race was broken by Tim Don in May 2017 at Ironman Brazil. If the Canadian wants his record back, he’ll need to drop about four minutes from his IMAZ time of 7:44:29  last year. For context, here are his splits from 2016:

Is this McMahon’s time to take down Sanders?

Fellow Canadian Brent McMahon, who placed second behind Sanders as IMAZ last year, will challenge him again. McMahon could be in a better position than Sanders going into the race since he didn’t race the marathon part of the Ironman World Championship (he pulled out after getting stung by a jellyfish and suffering during the bike). He’s also had some of his career highlights on this course: the fastest IM debut ever recorded (2014) and a 2:40 marathon for the run course record set last year. McMahon is extra hungry for some Kona redemption this year. Is that enough to take down Sanders and make history again?

@tribrentmcmahon is back in Arizona this weekend. The race that catapulted him into the history books. 2014 fastest ironman debut ever recorded (7:55:48). 2016 set a new run course record (2:40:17). "After a very disappointing day in Kona I quickly turned my focus and fitness towards Ironman Arizona. The last two years I’ve come into the event after racing Kona so this year I’m looking forward to having fresh legs and seeing how much faster I can go. #BahrainEndurance13 #IMArizona #Ironman

I guess it’s time to d-winterize for #IMAZ Its been nasty at home so the Moto fenders were nice 👍 Not so Aero though, but as I always say, train slow race fast! 💨 Looking forward to another battle with @lsanderstri in Arizona 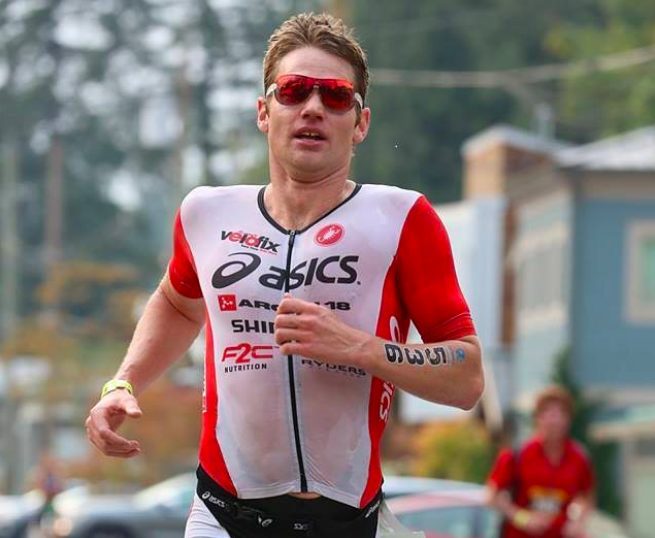 A third Canadian Ironman champion is on the start line, and we’re really excited to see him have a strong performance after a difficult past year. The 2015 Ironman Asia-Pacific champion, Jeff Symonds, is another super-runner like McMahon and has proven his prowess in full distance racing. Symonds has had a rough go recently. In 2016 he had a broken wrist which set him out of training for a bit and this year he posted a couple DNFs on his quest for Kona with some other injuries. We want to see Symonds back on top, and back in Kona next year and wish him a great race as he starts is 2018 KPR bid on Sunday.