Patrick Lange of Germany and Switzerland’s Daniela Ryf were crowned the king and queen of Kona on Saturday, but not before some incredible and unexpected battles in the two pro races. Here are the five top highlights from Saturday’s race:

Last year it was Mark Allen’s Kona marathon record, this year it was Craig Alexander’s course record. Patrick Lange didn’t just win the race, he did faster than anyone ever has in 8:01:40. The speedy German clocked another sub-2:40 marathon, too. He was in total disbelief at the finish line in several interviews said that the highlight of his success was being congratulated by Crowie himself, who is one of his idols.

Briefly caught up with the new champ! Congratulations @patricklange1 on an incredible performance and a new course record. #imwc2017 #imworldchampionship

Daniela Ryf has now entered hallowed ground, joining a small group of legends with her third consecutive victory at the Ironman World Championship. But it wasn’t without a major fight for the Swiss athlete, who typically leads from the front in races. Ryf came out of the water four minutes back, and gained no time on the leaders during the bike.

“My legs just didn’t want to go,” she said after the race. “I took energy, as much as I could put in. It was hard. I was really fighting today. In the last 40 kilometers I said, ‘Now I’m going to go, or I’m going to lose.”

Ryf finished 10 minutes over runner-up Lucy Charles in the end, and cried tears of relief in her most emotional finish to date.

Frodeno doesn’t give up

Defending champion Jan Frodeno didn’t have the race many expected him to have. The German said he suffered from back spasms early into the run, which he entered in fourth place off the bike. But he didn’t pull out — instead, he finished in 35th, greeting fans along the way like a true champion and cheering on his countryman Lange along the run.

Lucy Charles had a simply astonishing race. The former swimmer led out of the water alongside Lauren Brandon and the two stayed at the front of the race for most of the bike until Ryf passed her right at the end. Charles held on for a strong marathon to take second place in her pro Kona debut. If this performance and her young age is any indication, this woman is one to watch for for years to come.

Unbelievable day, 2nd in the World!!! 🌎 Thank you to everyone for your amazing support! Most of all thanks to my fiancé & coach @reecebarclaytri ❤️📸photo creds: @talbotcox #ironmanworldchampionship #kona #hawaii #triathlon #triathlete #swimbikerun #finishline #celebration #ironman #worldchamps #trichicks #womeninsport #girlpower #strongwomen 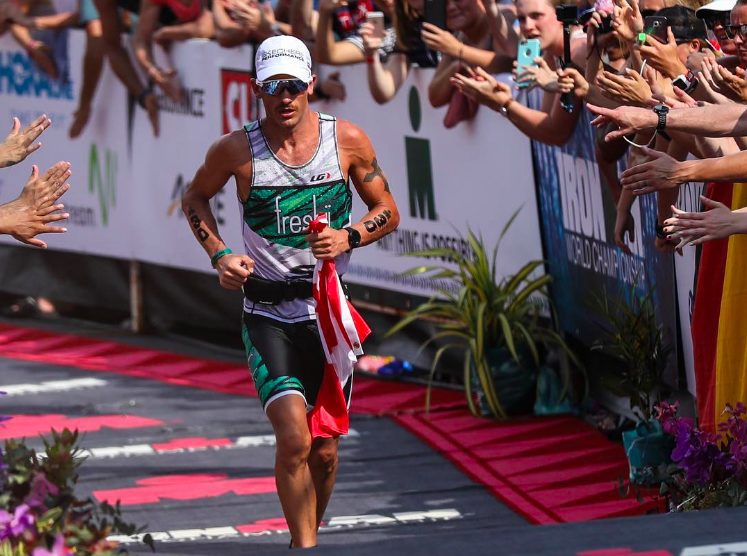 How could we not mention Lionel Sanders’ incredible second place? With a massively improved swim, he led the second pack out of the water and rode his way to the front of the bike for a ride that almost broke the course record. Sanders then clocked a 2:50 marathon that brought him in less than two minutes behind winner Patrick Lange (who told us on camera after the race that Sanders “will be the champ one day”). Sanders pushed himself to the very limit on Saturday and earned a ton of respect from triathlon fans across the world.