For those who haven’t been to the Big Island, it is really hard to explain what makes the race so tough, so competitive … so epic. Sure, there are harder courses. (Anyone listen to the folks who did the World Championship race in St. George this year? Caught up with someone who raced in Lanzarote or Wales?) Believe it or not, there are even races that are considerably hotter. (One year at Ironman Malaysia the volunteers – locals, this is – started bailing because it was too hot even for them.)

There are a number of amazing long-distance races around the world. Challenge Roth offers a one of a kind experience, too. The CanadaMan/ Woman race in Quebec is an endurance test like no other – as is the event its associated with as part of the Xtri series, the Norseman Xtreme. But while I encourage people to get out to all those events, there’s a reason that Kona is a dream for so many people.

Triathlon might have got its start in San Diego in the early 70s, but it was the crazy event in 1978 that really got things rolling. Commander John Collins and his wife Judy put on the first race that was to decide who was the fittest athlete – a swimmer, a biker or a runner. They came up with a course that combined the Waikiki Rough Water Swim, the Around Oahu Bike Race and the Honolulu Marathon.

“Whoever finishes that is an Ironman,” Collins said.

Now every triathlete wants to be one, too, Commander Collins.

There’s a reason that when it comes to long-distance races, people want to sign up for an Ironman. They don’t want to come into the office on Monday or Tuesday morning after their epic day of racing and have to explain to everyone that, no, the event they were at wasn’t that race in Hawaii, and wasn’t even a qualifier for that race. Even if they’d swam 3.8 km, biked 180 km and run a marathon, no matter how tough the course, somebody’s going to say “So was it an Ironman?”

That’s why so many people are willing to tattoo that logo on themselves after they’re done – they want everyone to know that they did it. You see a few Challenge tattoos out there, but not so many.

Kona is so special that it makes every other Ironman on the planet special, too. 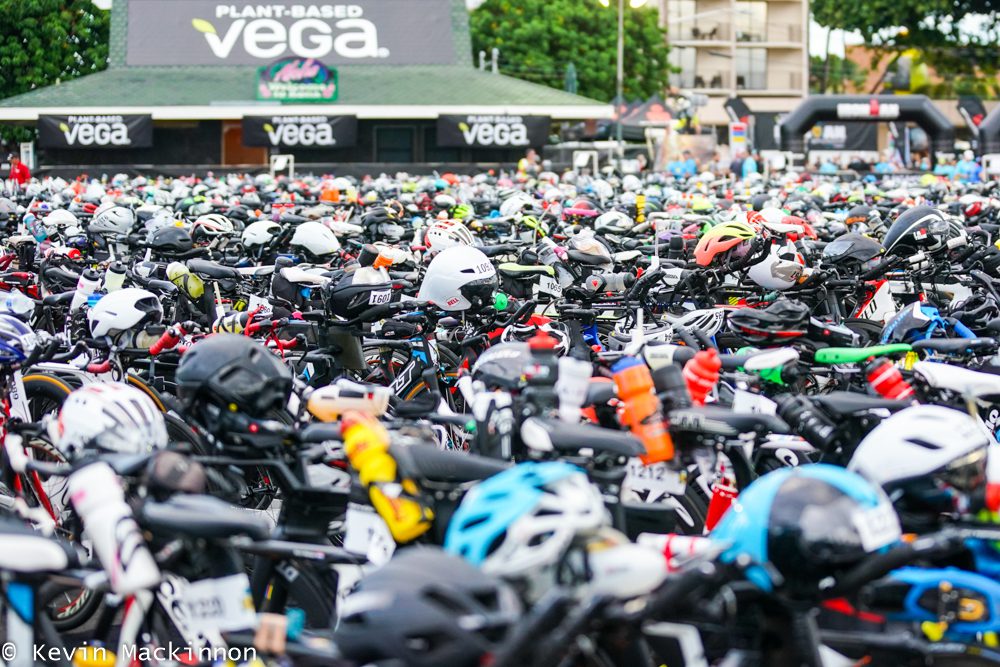 There are basically two ways to get to Kona – you either qualify or you get in through the Legacy Program. Qualification is easy, if you’re the fastest in your age group. Or at least one of the fastest in your age group. For all the other mortals in the race, though, just finishing the day is an achievement in and of itself. If you can do that 12 times and you’ve never qualified for Kona, you are eligible for a Legacy spot.

Either way you are amongst an elite group if you make it to the Big Island. You’re either fast, or extremely dedicated to long-distance racing. Triathletes are a special breed. Folks who have been to Kona are even more special.

I’ve always told the athletes I have coached to Kona that they are going to learn a lot of things about themselves on race day. While there are harder and hotter courses out there, the race in Kona is tough enough and hot enough to make things very difficult. Then you add in the incredibly competitive field, insane humidity and intense winds and there’s no long-distance race on the planet like it.

Race week in Kona is an experience in and of itself. There are people training pretty much every hour of the day. Even if you’re in incredible shape, it’s not hard to quickly decide that you’re not as you watch the even fitter specimens running up and down Ali’i Drive at all hours of the day.

Put all that together and you have a day that is like no other you’ve ever endured. There are times when you are certain you’ll never make it to the line. When you do you swear you’ll never do it again.

Then the next day you’re trying to figure out how you can get back there again.