When our race season vanished last spring, due to the COVID-19 pandemic, multi-sport athletes faced an identity crisis. In Triathlon Magazine Canada, editor Kevin Mackinnon mused “are we triathletes if we can not race?” Although the answer was yes, the constitution of our athletic being was shaken.

There was a glimmer of hope for racing in the summer, but the second wave of infections struck and washed over us like a tidal wave of emptiness.

Sure, there were some opportunities. The creation of virtual and “backyard” events offered outlets for our sweat and training, but these unreasonable facsimiles received only lukewarm responses. Furthermore, the events allowed to proceed under the barrage of COVID-compliant protocols was minimal, save for a few in Ontario and Alberta, and the Professional Triathletes Organisation supported Canadian Triathlon Championship race in September. Racing opportunities could be equally as rare in 2021 – provincial triathlon organizations and race directors are uncertain about what the summer will hold.

As we look into the future of multi-sport racing in Canada, it is as if we need a hero. Something to get us back onto the starting line. That hero, could be duathlon.

1) Dueling it out for popularity

Although triathlon is the most popular type of race in the multi-sport world, it isn’t the only option. From its very beginnings, the concept of propelling our bodies over large expanses of the planet was not limited to swim, bike and run. Ontario race announcer, Steve Fleck, remembers at a multi-sport organizing meeting in the mid-1980s, most people in attendance thought duathlon, not triathlon, would be the race of choice for most athletes.

For a while, they were right and duathlon enjoyed its moment in the sun. It seems like those who raced duathlons were thirsty people because in B.C. there was a series sponsored by the beer brand Kokanee, while in Ontario one of the biggest races was the Brick duathlon, sponsored by the Brick Brewery. The halcyon days for duathlon, however, were short-lived. By the mid-1990s, multi-sport for the masses was spelled I-R-O-N-M-A-N and, with few marquee events, and even fewer marquee athletes, (save for Kenny Souza) duathlon was relegated to being a fringe event within a fringe sport. Does anybody know that Lori Bowden won Kona? Probably a lot. Does anybody know that Lori Bowden won the Zofingen PowerMan Duathlon World Championship? A lot less. Here was evidence that the big jewel in the duathlon world shone much less brightly than its three-sport cousin. Still, one wonders how many world championships Bowden could have won in a sport that factored out her less than front-of-pack swim.

Although its popularity pales in comparison to triathlon, that doesn’t mean it has gone the way of the men’s tri-speedo.Triathlon Ontario’s Mike Mahoney estimates the province has about 1,000 active duathletes. Athletes there can choose from sprints, standards and even a long-course event. In British Columbia, the menu isn’t quite as rich, with only four events.

The question arises, why is duathlon less popular in Canada? We put the question to athletes, race announcers, and those responsible for sanctioning races. Though our responses are far from conclusive, they offer some insights and opportunities.

The moment that triathlon stepped out of the shadows and into the spotlight of the Canadian sporting world was when a smiling kid from Kingston, Ont. crossed the finish line ahead of everybody else at the 2000 Sydney Olympics. If duathlon became an Olympic sport, the increased media exposure and opportunities for young Canadians to chase their dreams would certainly fuel increased attention to the sport.

For those too young to remember Whitfield, there is another media phenom from Ontario in today’s triathlon world. Lionel Sanders has mastered the art of social media better than his swimming and likely better than almost anybody in the sport. His candid and often self-deprecating videos generate thousands of views on YouTube. Many videos are about his quest for a better swim. The first words out of his mouth after placing fourth at the PTO Championships were, “I swam horribly. You can’t swim like this.” If duathlon was as lucrative as triathlon, imagine the success Sanders could enjoy. 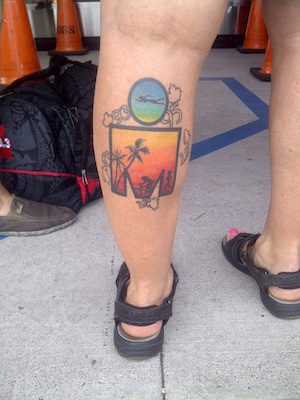 For mainstream Canadian society, if a person was to pay attention to a sport, it would likely be hockey, basketball (if the Raptors are doing well), baseball, (if you live within sight of the CN Tower), or CFL football (if you live within sight of a combine). Triathlon is a sport few Canadians know about and, for those who do, they will, of course, think Ironman. So when you need to tell the world about your athletic conquests on your skin, you are going to invest in the most powerful symbol in all of triathlon – the M-Dot tattoo.

Let’s face it, if you invest in a hobby that can swallow all of your financial resources, threaten your marriage and have your kids put up missing parents posters at the local 7-11, you won’t be inking up with a logo from the Bare Bones Duathlon in Penticton, even if one existed. No, you are going for the tattoo that at least one per cent of beach-goers are going to recognize. Maybe they will recognize it, strike up a conversation, and let you tell them all about your epic training and racing.

Except for former competitive swimmers or first-timers, most age groupers view the swim portion of a triathlon as a warm-up. And the longer the race, the more sensible advice this is. Coaches tell us to take it easy, don’t wreck your chance of finishing well, or finishing at all, by squandering it in the water. In a duathlon, there is no warm-up after the starting gun goes off – it is full throttle to the finish line, or until the wheels fall off. And there are no excuses either – “I wasn’t a swim club kid” – doesn’t cut it. We all ran as kids. And most of us had some sort of bike. To get good at duathlon you just have to go hard and suffer, not pursue a magical swim stroke that will put you at the front of the pack.

And now … Why we should be duathletes

Despite the lack of heroes, recognizable skin art, and racing opportunities, the future for duathlon in Canada is bright. For 95 per cent of Canadians, winter, the kind with snow and -30 C, is a real thing. Duathlon doesn’t require chopping holes in the ice or walrus blubber thickness wetsuits to compete. Our triathlon race season in Canada is from June to September, about a 15-week window. That compares to potentially a five-month season for duathlon.

In addition to having a more favourable racing to training ratio than triathlon, another reason duathlon is poised for a resurgence is COVID-related. With the myriad of safety protocols required to stage a COVID-compliant triathlon, duathlons have an advantage as they require fewer volunteers. Furthermore, Covid has made swim training more problematic. With many pools having restricted access, and in some communities, no access, it is becoming harder to train for the swim.

The last two reasons for duathlon’s comeback could also be the most compelling. As we know, the swim segment of a triathlon poses significant risks, physical and financial. Allan Prazsky from Triathlon B.C. has seen the increased costs of producing triathlons over the years, which he partly attributes to the cost of covering liability insurance in addition to the growing costs of traffic planning. He sees a future in off-road multi-sport racing, and he believes one of the most cost-effective events could be a gravel duathlon. With no swim to pay for, nor traffic management required, expenses would be significantly reduced. Furthermore, gravel duathlon could liberate multi-sport athletes from the orthodoxy of 1.5/40/10, or every other standardized distance race. Without being consumed about where they should be on the racecourse by a certain time on their watch, they can become more engaged with what they are doing in the moment.

Although the COVID-19 health crisis decimated the 2020 multi-sport season, it also provided us an opportunity. If Canadian race directors were to offer more duathlons, not only would we have a better chance of racing during these uncertain times, but also, we also may get the chance to opportunity to race more frequently through the year.