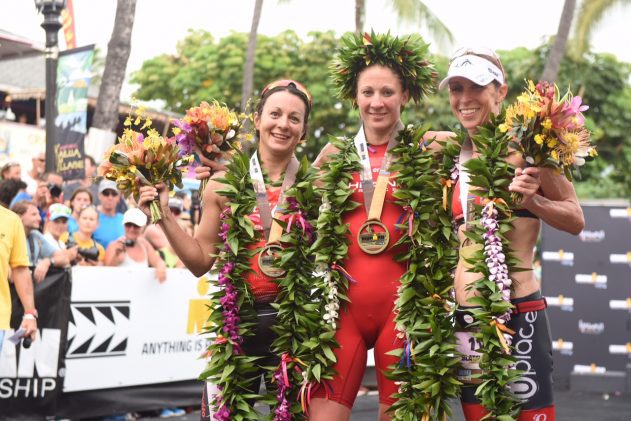 The world’s top long distance athletes are on the Big Island and done with all their major training for the most important race of the year, the Ironman World Championship. We’re now just three days out from the big day, so here’s a quick preview of some of the big names you should watch out for in the pro women’s race on Saturday.

Switzerland’s Ryf has come into Kona this year as the defending champ and many have pegged the 29-year-old as the favourite for this year’s race as well. A former ITU triathlete, Ryf has the fast swimming ability to stay with a front pack in the water to set herself up for a great ride and solid run in the latter half of the race. Ryf was the runner-up in 2014 to Mirinda Carfrae and while she’s a strong runner herself, her average 3:06-Kona run split over the last few year’s isn’t a match for Carfrae’s best 2:50. Ryf will want to put herself as far ahead of the Australian on the bike as possible, but also will want to make sure she brings her strongest run split of the year on Saturday if she wants to defend her title.

Carfrae will be going for an incredible fourth Kona title on Saturday and many are expecting an exciting footrace between her and Ryf on the run, acknowledging that the 35-year-old has a legitimate shot at the win. Rinny had some unfortunate luck on the Big Island last year after an unfortunate DNF from an injury set her out mid-race. She’s coming off an Ironman Austria course record this year and has said in interviews she thinks she’s capable of taking minutes off her Kona swim, bike and run PBs. Will we see her go under 2:50 on the marathon? Carfrae knows she has Ryf to contend with this year, so it might well be a possibility.

The sole Canadian woman in the field this year, Heather Wurtele is due a slice of luck at Kona. After a DNF in last years race due to a total failure of her electronic gear shifting, her form leading into this year’s event is once again outstanding. She has dominated over the 70.3 distance for much of this season, winning four events, including the North American Pro Championship at in St. George, Utah, and a stunning start to finish victory at Ironman 70.3 Victoria. Wurtele then took victory at Challenge Iceland, before having to settle for second behind Britain’s Holly Lawrence at Ironman 70.3 Mont-Tremblant. At the 70.3 World Championships in Australia, Wurtele was able to close the gap to Lawrence, but once again, the Brit took top spot with Wurtele in third. She did claim a notable scalp though, forcing current Ironman World Champion Daniela Ryf down into fourth. Wurtele has shown across this season that she is a serious contender in every race she enters, and Kona should prove no different. If things go her way, there is no reason that Wurtele shouldn’t be amongst the athletes pushing for top spot.

Unbeaten since Ironman Cairns and riding the confidence boost from winning the ITU Long Distance Championship, Jodie Swallow is ready to smash the Kona course this year in her attempt at a first Kona title. The super swimmer will be one of the first out of the water and knows what it takes to make a statement on the bike on the Big Island. With the experience and strong 2016 results behind her, this could be Swallow’s year.

Many had Hauschildt pegged as the favourite for last month’s Ironman 70.3 World Championship. The Australian ended up finishing second and had a dominant performance at Ironman Frankfurt this summer proving she is in incredible shape to go after her first Kona title.