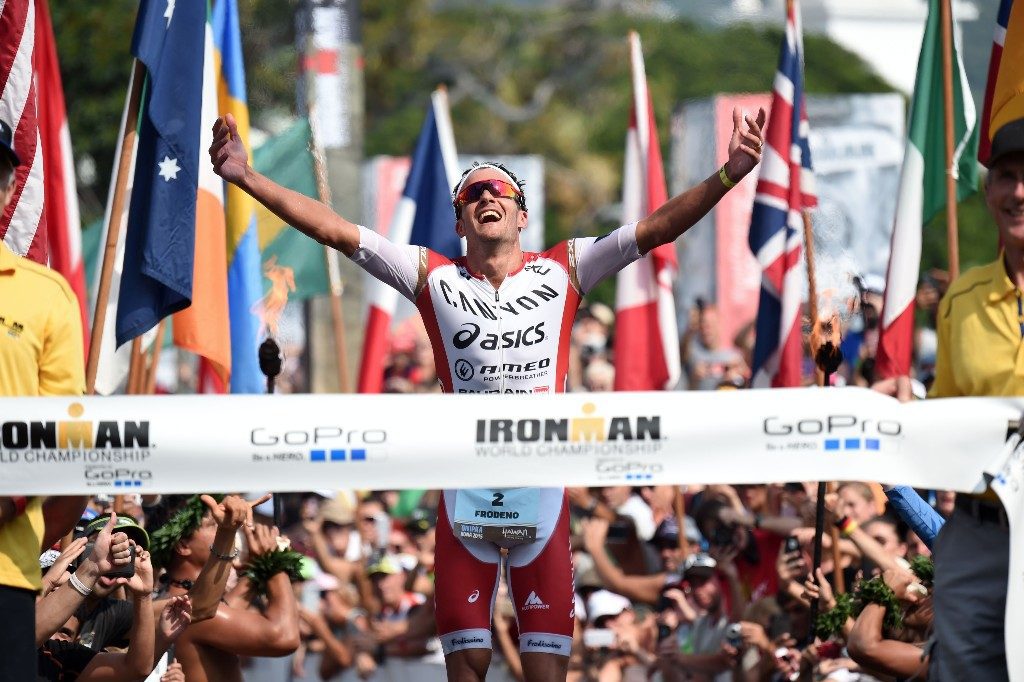 We’re now two days out from the 2016 Ironman World Championship. Yesterday we gave our brief overview of the women’s race with some key names to watch for, so today here’s our men’s preview. On this start line, we have three strong Canadians but unlike in the women’s race, there aren’t as many big names absent this year so all the top contenders will be gunning for the podium. Can Jan Frodeno repeat? Will his countryman Kienle take the title from him? Or will we see an entirely new name atop the podium?

What more can be said about this man that hasn’t already been said? In 2015 Jan Frodeno won both the Ironman and 70.3 World Championships, to add to his Olympic title from 2008. He then set out in 2016 to beat the record for a full-distance race and duly smashed it with a stunning performance of 7:35:39 at Challenge Roth. If Frodeno brings his A-game, he is the clear favourite, but he has been beaten this year and decided to sit out the 70.3 World Championships to recover from Roth and prepare for Kona. He has the speed to compete in every discipline, but nothing short of best will do if Frodeno wants to defend his title. That said, nobody would be surprised to see Frodeno on top of yet another podium.

Kienle won the Ironman World Championship in 2015 and there is no doubt that this man wants his title back. Kienle comes into Kona fresh from second place at the 70.3 World Championships and has demonstrated his form this summer with victory at the Ironman European Championship in a blistering time of 7:52:43. Kienle’s biggest weakness is his swimming, so he is likely to head into T1 at least a few minutes behind his rivals. In contrast, he is known as one of the best bikers in the sport. If Kienle can get on terms early with the main group, expect him to stretch the field on the bike and hurt his rivals. From there, he can run with the best and surely has an excellent chance of taking home another World Championship victory.

Since stepping up from ITU, Tim Don has had a series of victories at both 70.3 and Ironman distance and this could be the year where he really makes a statement in Hawaii. He came second behind Brent McMahon at Ironman Brazil, and came home seventh at the 70.3 World Championships last month. Don is widely considered one of the best runners in long-distance triathlon, so don’t be surprised to see the main competitors try to leave him behind on the bike. If he can stay in touch into T2, we could see a superb footrace to the finish.

Jesse Thomas is heading into his first Ironman World Championship, but has many people tipping him for a standout rookie performance. Thomas has only raced over the distance twice, but won on both occasions, including beating Jan Frodeno at Ironman Lanzarote earlier this year. He has a strong racing pedigree and is renowned for relishing hot, challenging courses. Thomas has only raced lightly in 2016 and clearly feels he competes better well rested. Don’t be surprised to see him enjoying the difficult conditions on the bike and running with the best of them to the finish. Will we see a rookie challenging for the podium? If we do, Thomas may just be that man.

Another former champ returning to Kona will be 2013 winner Frederik Van Lierde. His consistency that day across all three disciplines won him the race, and Van Lierde will be hoping for more of the same. He has a best finish of second this season, in Ironman 70.3 Sweden, but it is always a mistake to rule out athletes that already know what it takes to win in Hawaii.

A lot was expected of O’Donnell this season following an excellent 2015 which culminated in third place at Kona last time out. 2016 hasn’t quite lived up to those hopes, but he validated his entry at the Ironman European Championship in Frankfurt over the summer in a race only notable a number of mechanical issues suffered by O’Donnell. He will be keen to put that experience behind him heading into Kona, but he has left it all out there in Hawaii before and knows he has the ability to compete against the strongest of fields..

Brent McMahon had a spectacular start to the year, winning Ironman Brazil in May, in 7.46.10, the second fastest time in an Ironman race ever. His performance certainly established him as one of the early favourites for Kona, and sent out an early season warning that 2016 could be his year.

Since then, it has been a case of steady progress. McMahon has had some other impressive results, including fifth at the North American 70.3 Pro Championship, eighth at Ironman 70.3 Philippines and 14th in the stacked field at the 70.3 World Championships in Australia, but nothing has quite matched the heights of that race in South America.

There is the suspicion though, that McMahon is saving another spectacular performance for Kona. His speed over the full distance is already impressive, and with the work he has put in for his 70.3 distance races throughout the season, McMahon will have a lot of his rivals worried about just how fast he could go. If he has timed his peak well, it would be no surprise to see McMahon taking home top spot.

Lionel Sanders also got his season off to a fast start, with three Ironman 70.3 victories before the end of April. He then followed this up by taking the win at the North American 70.3 Pro Championship in St. George, Utah, in May.

Sanders carried this form through to another race win at Ironman 70.3 Mont-Tremblant in June.. His prowess on the bike and run lead to Ironman hall of fame inductee Bob Babbitt to to suggest he might be the the best cyclist and runner in the sport right now in the most recent edition of Triathlon Magazine Canada.

The swim though, is clearly a weakness for Sanders, and this was highlighted at the 70.3 World Championships in September, where he finished ninth, despite the fastest run of the day. He was left with too much too do coming out of the swim, and with a flat bike course and a lot of strong riders, just couldn’t make up the time.

Sanders is clearly a force to be reckoned with though, and if he can stay in touch coming out of the water, we might just see him bike and run his way through the field and challenge for top spot.

Trevor Wurtele is the third male Canadian at this year’s World Championship and has quietly put together a very impressive season. While he hasn’t received the same attention as Sanders and McMahon, Wurtele is strong across all three disciplines and has shown himself to be a very tough competitor this year.

Wurtele has finished second in three 70.3 races this year, including at Victoria and Mont-Tremblant, and took sixth place, just behind McMahon in the North American Pro Championship. He also put together a great race at Ironman Canada in Whistler, finishing third behind a stunning performance from Andy Potts.
It feels like this could be a big year for Wurtele, with so many consistent results under his belt. This will be his first year racing the Ironman World Championship and he could easily surprise a few people with a very strong finish.