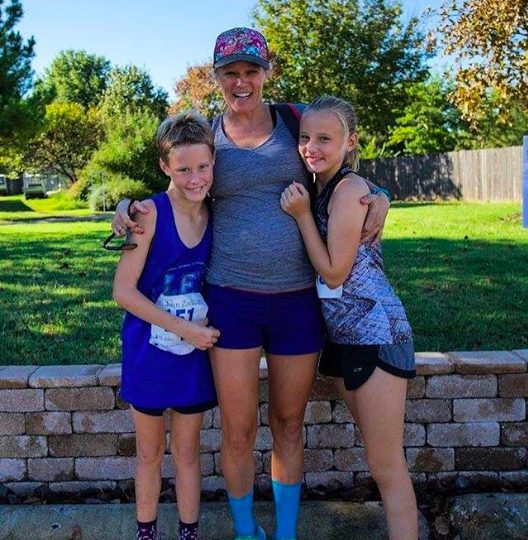 I recently gave birth to my third child. I had my twins 11 years ago –I haven’t had a baby in a long time. Turns out it’s just like riding a bike. There’s something special about your second pregnancy (or third or fourth or whatever) that you kind of know what’s going on and realizing eating deli meat probably is not the end of the world. I can’t stop looking at this little girl and marvel that I created this being. My body did that. I also can’t stop looking at this once Ironman fit body and marvel that I have a lot of work to do in the terms of fitness. That’s okay. I’ve done it before. I know how this works. My mantra after my twins’ birth was, “Rome wasn’t built in a day.” The same holds true now.

They say comparison is the thief of joy. I can tell you some of the other pro mothers that pop a baby out and look like they are race ready two weeks later is a bit intimidating. “Oh man, how does she have chiseled abs already??” Stop, Jessica. Don’t even go there. Don’t compare. You didn’t even have chiseled abs before, why the heck would you have them now? My goal this pregnancy was to stay active not from a training aspect, but to stay healthy both physically and emotionally. So while I don’t think comparing yourself to other’s is productive, I do look back at my pregnancy with the twins and it just reinforces that each pregnancy can be drastically different.

I was 28 years old during my first pregnancy. I was sick and tired the first trimester. I felt great the second trimester but I got “big” quickly. While I would love to blame it on that I was carrying twins, the truth is I didn’t care about what I ate. While I remained active as long as I could, it’s true you can’t outrun a bad diet. The real nail in the coffin was going on bedrest for roughly 7 weeks. By the time my water spontaneously broke, I weighed in at the twin’s birth at 200lbs. I had a c-section, which meant no activity besides walking for 8 weeks after their birth. My twins were premature yet only spent an hour in the NICU. When I brought them home and for the next 6 months I was exhausted. My body was weak and compromised from literally sitting around on my butt for 2 months. People asked for a good 6 months after their birth when I was due. I’m not going to lie, it was demoralizing. Finding a routine for premature twins felt like I was drowning the majority of the time. I developed postpartum depression and honestly the first year of their lives was a haze. The thought of racing again seemed impossible. Shoot, the thought of fitting in my pre-pregnancy jeans seemed impossible! When the twins finally started gaining weight and sleeping more I slowly felt my mojo coming back. I decided I would sign up for a local sprint race. I rode my bike when the twins napped, usually 60-90 minutes. I was able to get out for longer rides on the weekend, which was 2-3 hours long. I ran pushing the jogger. I swam when their dad got home from work, 3-4 times a week. I surprised myself actually doing pretty well in the race, the twins now 13 months old. I also remember that I finally was under 150lbs for the race (I race now at 135lbs). I decided that I would go ahead and race the pro race (Olympic distance) the next month at Memphis in May. To my surprise I finished second to Alicia Kaye and put up a solid result, finishing in 2:03:32. It was the first time I realized maybe all hope wasn’t lost. I signed up for my first half ironman later that fall and did what I could training wise. The rest is history.

With this pregnancy I’m in the infancy (no pun intended) stage of being “race ready.” However, I can tell you that I’m in a much better position than I was despite being 11 years older. While I didn’t restrict myself anyway, I was a lot much more mindful of my diet this go round. Just because I was pregnant wasn’t an excuse to go hog wild like the first time. I weighed in at Frankie’s birth at 168 pounds. I was able to have her naturally so I have been able to resume light running a few weeks after her birth. I breastfed the twins and I’m doing the same for Frankie, which makes running interesting (ahem double sports bra is a must!!), feeding just one baby is obviously much more manageable. Hopefully I’ll fit in my jeans a lot sooner than I did with the twins. Until then it’s all spanx and spandex all the way.

3300 yards for #33weekspregnant! So I've abandoned riding–I could sit here and tell you that it's too cold and too uncomfortable which is true, but add on too unmotivated and that's the real deciding factor. I've taken up the slack by finally hitting the pool 4-5 times a week from 30-60 minutes. Still running (slowly) 3-4 times per week 40 minutes depending on how badly my sciatica is acting up. I've completely let go of the notion of "training" and embraced being an exerciser. The last few weeks have been a little stressful as my bump measured 29weeks at both my 31 & 32 week visit. A growth ultrasound was ordered just to make sure all is okay. Little girl is just fine measuring at 60th percentile. Doctor's verdict was all that core work is paying off and I'm holding her well! 🤣I imagine God is doing me a solid after the enormity I reached my last pregnancy with the twins! 7 weeks to meet the little lady ❤️💙❤️ #triathlon #tri #trimom #propregnancy #fitpregnancy #fitfamily #homestretch

Resuming training post pregnancy is a challenge, no matter what. I have the unique experience of a very difficult pregnancy and post pregnancy, and a relatively easier one. Here are a few tips I recommend no matter how “bad” or “good” you think your fitness is.

Be flexible. Personally, I love a schedule. I love goals. I am driven by routine. However, with a new baby there are suddenly new variables and kinks in the plan. Your baby can have a particularly bad night or get sick or a million other things babies do. It’s important to give yourself wiggle room and realize your return to regimented training and racing might not happen exactly when you want it to. That’s okay! Some days are about doing what you can when you feel good and have the time and other days are a wash. It happens.

Don’t get discouraged. Some days you are the hammer, but most of the days you feel like the nail. Your first swim, bike or run back there’s a good chance what the clock shows you will be a surprise, and I don’t mean that in a good way. And even more surprising is how hard it feels to be that slow! That’s okay! In fact, turn that clock off! The important thing is that you’re doing it, and that fitness and speed WILL come around, it just takes time and patience. In the meantime resist getting upset or down about it.

Be patient. Yes, it would be fantastic to be snap your fingers and suddenly be where you want to be. However, Rome wasn’t built in a day, and your body won’t resume to pre-pregnancy form either in a day. Until then remember, just like training, it’s a process that takes time.

Be kind to yourself. I still look in the mirror and see a very soft midsection and think, “Come on, still?” Look, you just did something pretty spectacular, don’t go bashing your body! It took a long time to make a healthy baby, and it takes a long time to bounce back. In the meantime those little stretch marks and imperfections, those are proof that you are a bad mama jama that did one of the hardest thing in this world physically there is to do. Embrace it. And then repeat to yourself, “I’m a bad mama jama.”

As for me, I’m taking a my own advise as I resume to training. I have no hard race plans yet and my attention is on loving on this baby, getting sleep when I can, and slowly working my way back into training. I’ll be keeping you posted periodically on what that looks like. Until then, know that whenever you do get to that finish line, know they see infinitely sweeter with your little one waiting for you!!