It was past the point of being funny, they wanted me to pee right then, right there. The other boys — Russell Pennock and Xavier Grenier-Talavera — had evidently hit the aid stations a lot better than I as they were in and out of the Doping Control Area in rapid succession. I’d done the anti-doping procedure many times before and usually had a urine sample ready to go. But I’d never waited this long, almost two hours post race. I was clearly very dehydrated, but what could I expect after an Olympic distance race in the heat and humidity of an Ottawa summer.

“Hah this is nothing, one time we were waiting so late they kicked us out of school gym at 3AM!”

But as the time dragged on the frustration, mine and theirs was settling in. One of the officers mentioned he would have to tell his wife he would be late to their son’s fifth birthday and I apologized profusely while the image of his wife standing over me with a disappointed look added to the growing anxiety.

A friend told me to jump up and down and I started hopping on the spot. Very curious on the science behind this cause it seemed to work. I could feel…something. I looked the doping officer in the eye, “Alright, let’s go!”

But “go” was anything but what I did, at least not the desired volume. In order to have a proper sample one needs to provide at least 90 ml of urine, preferably more in case of unsteady hands and I only had 40 ml on my first go. The officer may have been more disappointed than me, but he held face and escorted me back to the anti-doping room. The birthday was now in question, and my awards ceremony, due to start in 45 minutes was beginning to look like it wouldn’t happen either. We were running out of time, the pressure was starting to mount…

I came to Ottawa with the goal of winning elite nationals. Last year when I was just getting back into training this was my big goal. Of course I was never really certain I could pull it off, it was one of those things you tell yourself to get excited and to light a fire under your ass early in the year. But as this season has progressed it seemed a little more achievable and after a couple of solid races in Europe early this month I stood on the start line in Ottawa believing I had a shot to take the title. Of course in a field like this it would certainly be a challenge.

Coming out of the swim I was in a bunch with Jason Wilson, Xavier Grenier-Talavera, Myles Zagar and Francis Lefevbre. We were in between a guy out front, Hunter Lussi, and the sizeable second chase pack behind which contained a number of quality runners including Russell Pennock. Our group pushed it for the first couple of bike laps but we just couldn’t make any time on Lussi and the chase pack was slowly reeling us in. The choice had to be made, double down on this effort and try and maintain the gap, or fold and wait for the run.

Our cards were face up. We had nothing.

Onto the run I pushed it out of T2 and was quickly joined by Izewski the American athlete. We both worked together for the first lap to try and put a gap into the guys behind. It worked slightly and by halfway we had about 15 seconds on Pennock. But that was halfway and there was still 5 km to go. The fatigue was starting to set in. 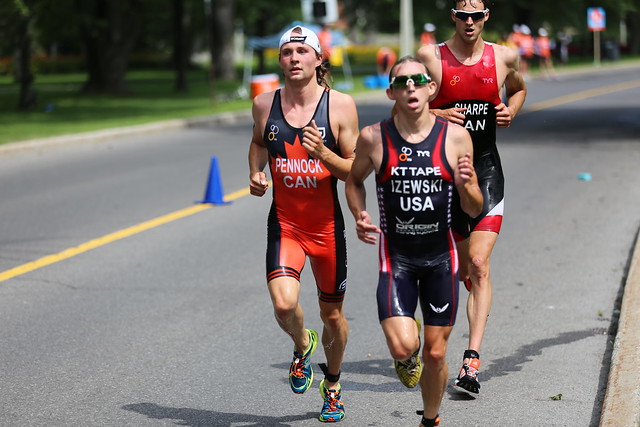 Russell brought us back and we ran together, the three of us for a brief period. I was hurting and could really feel the fatigue setting in. The boys were pulling me along and I think Russell could sense my pain as he gave me a bottle of water through one of the aid stations. The mind was going to dark places but I was actually able to push through those periods, because it’s easier faking it with fast guys then trying to run on your own.

As I ran down the finish chute for third place I was able to clean my face up a bit and finish without someone breathing down my neck. My mum was there to greet me and for first time in almost four years I was able to give her a hug at the finish. She’s been an amazing supporter of mine over the years and I was just so happy to perform well in front of her.

In the end I finished second Canadian to Russell Pennock who had a very strong effort to take the win. Its no shame finishing behind an athlete of that calibre with what some would argue is the best hair in the nation (should be a hair model to be honest).

He mentioned to me he was “honored to win the national title and to be included with some amazing athletes who have come out of Canada.” He’s a full time student at the University of Calgary and works part time at a local running store so the man knows what hard work and dedication looks like. Luckily he also has a great group of friends with the UofC Cross Country team (Go Dinos), and that helps give him a sense of balance which can often be unattainable at an elite level.

Russell also wanted to thank his biggest supporters including his parents: Kevin and Patricia Pennock. His coach Bart Ujack has also been instrumental in getting him to where he is now.

He also appreciates the support he receives through the Petro Canada F.A.C.E foundation and the Edmonton Legacy Trust Fund.

I didn’t race the women’s event so I can’t really give a full account of what happened. But because the race organizers didn’t have the water quality tests in time and the women had to compete in a duathlon format which is pretty damn hard. The hometown was treated well as the local girl Joanna Brown finished second overall with her training partner and friend Dominika Jamnicky finishing third. American Abigail Levene broke up the Canadian podium by taking the win. Speaking with Joanna after the race she was completely humbled by the support she received from the crowd. “I felt like everyone there was cheering for me, it was unbelievable.”

After a number of difficult years where she felt like she wasn’t happy with where she was at it was nice to see her perform well in front of the home crowd. She credits her return to form to the unconditional support of her family which not only includes her parents but also her auntie Joan, her boyfriend Alexander and his family along with her coach Craig and his family.

“It takes a village!” Yes, it truly does.

In the junior races Desirae Ridenour took home the title followed closely by teammate Hannah Henry from Victoria. Arizona State-bound Emily Wagner out of Calgary rounded out the podium in third.

The junior men’s champion Charles Paquet continued his dominance this season with the win, with a consistent performing Oliver Blecher in second followed by Michael Milic in the bronze position.

The weekend ended with, in my opinion, the most exciting race the mixed gender relay. Two guys and two girls formed the teams and with intense provincial rivalries at stake BC was able to hold on for the win with Manitoba and Alberta finishing second and third. Great stuff.

6:25 PM and I was finally done with the antidumping process. After all the stress, the pressure and the buildup, I was finally able to provide a sample to the doping control officers. I rushed out to make the podium ceremony where I got a few more pictures for mum. And kind of like the race weekend, where there were a few uncertainties, a few first time errors and a few close calls everything ended up working out well in the end.

For a first year event I was very impressed with the Ottawa Triathlon. It’s not easy to create a whole new race from scratch, the logistics and needs that are required to pull it off are numerous. But as the weekend progressed and the initial worries and bumps started to smooth, you could feel an excitement that built through the events and finished with a very positive atmosphere. To those who built this event and the volunteers and technical officials who managed to provide a safe and fun environment you deserve all the credit possible. I was lucky enough to race in the elite men’s race and experience most of what the Ottawa race weekend had to offer. I may be biased (OK, very biased) but after watching the very first age-group, draft-legal national championships, and hearing the finishers declare how “fun” and “exciting” their races were, I was beyond stoked.

There was a bit of skepticism surrounding this event and I think people were pretty nervous going into it. But the athletes and officials all pulled it off, and while watching groups of 20 athletes flying into T2 together I felt very connected to my fellow athletes. Of course I was happy to see my mum come off the bike with no issues, so I guess the same feeling she has watching and worrying about me is now something I will also have to deal with.

So another big thanks to those who helped make the Ottawa Triathlon Weekend a success.

Already stoked for next year!